Aka the “Porpoise Galaxy”.  Via APOD, of course: 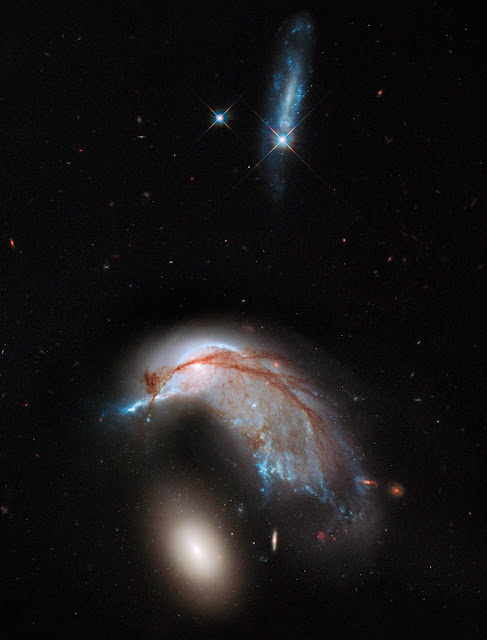 Scary Sentence of the Day...

In a piece by Alex Hern, writing in the New Statesman:


Now, redistribution is already, prima facie, one of the absolute best things a government can do.

The term “redistribution”, here, means “take money from some people, and give it to others”.

That sentence is not being taken out of context – go read the article if you doubt me.

This is a very baldly stated version of a central tenet of Progressivism (and many other flavors of socialism): that the state should take money from some people, and give that money to others.

It's bad enough to know that a significant fraction of our body politic believes that stealing from the wealthy and handing that money over to the less wealthy is a justifiable – and even good – thing to do.  Note that this “redistribution” really isn't from the rich to the poor, as many Progressives would style it.  Not unless you consider people making $75k a year to be rich, and anyone making less than $40k a year to be poor – because, roughly speaking, that's how our current redistribution system (primarily income taxes and earned income tax credits) is set up.  But to call such as system one of the “absolute best” things that government can do...now that's scary.

Reading things like that causes me to hear those drums again.  Those drums of doom...
Posted by Unknown at (permalink) 7:44 AM No comments:

Quantum Mechanism of Photosynthesis Worked Out...

The amazingly high efficiency of photosynthesis was long unexplainable by ordinary chemistry.  A few years ago, scientists concluded that a “room temperature” quantum-mechanical system must be responsible.  Now researchers have figured out the actual mechanism, and it's even more amazing than they'd expected it to be.  If a similar system can be constructed for man-made solar power systems, we're going to see some mighty awesome solar panels!
Posted by Unknown at (permalink) 7:26 AM No comments:


The middle-aged couple had finally learned how to send and receive texts on their cell phones.  The wife, being a romantic at heart, decided one day that she'd send her husband a text while she was out of the house having coffee with a friend.

If you are sleeping, send me your dreams.

If you are laughing, send me your smile.

If you are eating, send me a bite.

If you are drinking, send me a sip.

If you are crying, send me your tears.

The husband, being a no-nonsense sort of guy, texted back:

I'm on the toilet. Please advise.

Posted by Unknown at (permalink) 7:16 AM No comments:

Several readers wrote over the weekend, wondering where the hell I was.  One even asked if I was ok.

Yes, I'm fine :)  Debbie and I were on a stake-out – trying to trap a mother cat and six kittens (about six weeks old) living underneath the old barracks at the former Naval Training Center, down near the San Diego Airport.  Debbie goes there frequently for dog agility meets, and one of her friends told her about the family of feral cats there.  She organized a trapper from the Feral Cat Coalition, and our vet (the wonderful Dr. Christine Wilson) agreed to find homes for them (she does this sort of thing all the time) if we could get them.  The trapper caught the mother cat on Friday, then Debbie and I manned the traps late Friday night and all day Saturday and Sunday.  We caught three of the kittens; three are still left.  Debbie will be down there again today to try and catch the remaining three...
Posted by Unknown at (permalink) 7:14 AM No comments:

In a former life, when I was employed by Stac Electronics, Previo, or FutureTrade, I visited Russia a dozen or so times (mostly St. Petersburg, but also Moscow and Vladivostok).  I've even driven there a few times, once with a friend (driving from Tallinn, Estonia to St. Petersburg, Russia) and once on my own (making a grand circuit from Helsinki, Finland north and east through Murmansk and St. Petersburg, Russia, and then back to Tallinn, Estonia).  Since my visits there, Putin has cemented power in his thugocracy and I'm no longer comfortable with personal security there.  But there's another reason why I'm not going there, and especially not driving there:


We have our share of bad drivers here in the U.S.; I see them every time I drive somewhere. But I've been to some places where the drivers are far worse; Russia, Costa Rica, Thailand, and the Phillipines are amongst those places. There's a reckless disregard for life and limb in those places that is amazingly pervasive – so much so that you'd think evolution would take care of this problem within a generation or so...
Posted by Unknown at (permalink) 7:04 AM No comments: