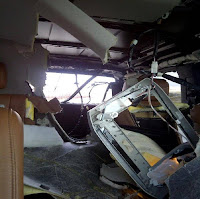 They think that the juvenile male grizzly opened the door of this Toyota Sequoia while looking for food.  Then he crawled in, and the door shut (probably blown closed by the wind), trapping the poor fellow inside.  This did not make our grizzly bear happy, and he made his displeasure quite clear.  To the Toyota Sequoia, that is.

Much more here and here...
Posted by Unknown at (permalink) 7:39 AM No comments:

How Many Guns in the United States?

This question came to me as I was pondering the consequences of a disarmed citizenry.  It occurred to me that I had no idea how many people had how many guns.  Most people I know here in the San Diego area do not own a gun, and probably wouldn't under just about any circumstance.  It's far easier to get illicit drugs here than it is a concealed carry permit, so I know there aren't too many citizens packing heat on the street.  So I did a little research, and came up with a Wikipedia article on the guns per capita (by country), and this Washington Post article with gun ownership rates per household (by state).

If you accept the 88.8 per 100 residents gun ownership rate for the U.S., then there are roughly 275 million privately-owned guns in the U.S.  That's a lot of guns, and personally I find that very comforting.  I suspect that number only includes legally owned guns, so it's probably on the low side.

The households with guns rate varies widely by state, from 3.8% of Washington, D.C. households to 59.7% of Wyoming households.  In California, the rate is 21.3% – and in Idaho (where it's likely we're headed) the rate is 55.3%.  It's easy to pick out the strong correlation between the lefty states and low gun ownership rates, and vice versa.

If this year's elections keep us on the train to Progressive hell, I think the likelihood of Greek-style “youth riots” in our cities goes up dramatically.  If and when that happens, I want to be far from any big city, and surrounded by solid citizens with guns.  I love the mountains of San Diego County...but they don't meet these criteria...
Posted by Unknown at (permalink) 7:30 AM No comments:

...and both are pointing down, strongly.  Dang.  Looks like we might not be headed for a recovery just yet...
Posted by Unknown at (permalink) 7:06 AM No comments:

Posted by Unknown at (permalink) 7:03 AM No comments:

How to Stop a Massacre...

Via my mom, and totally self-explanatory:

Long time readers know that periodically I rail on about the sorry state of math and science education in the U.S.  One of my oft-expressed worries is the rather evident superiority of the schooling of so many kids from other countries.  I have personal experience in this regard with the kids from Estonian and Russian school systems.

Now the New York Times (in the person of Andrew Hacker, an emeritus professor of Political Science at Queen's College, and frequently quoted by the same crowd that quotes Noam Chomsky – in other words, he's a far-left “Progressive”) offers us a simple solution: get rid of algebra.  In other words, if a subject is “too hard” for American students, the answer is to get rid of the subject.  To quote the good professor:


Instead of investing so much of our academic energy in a subject that blocks further attainment for much of our population, I propose that we start thinking about alternatives. Thus mathematics teachers at every level could create exciting courses in what I call “citizen statistics.” This would not be a backdoor version of algebra, as in the Advanced Placement syllabus. Nor would it focus on equations used by scholars when they write for one another. Instead, it would familiarize students with the kinds of numbers that describe and delineate our personal and public lives.

It could, for example, teach students how the Consumer Price Index is computed, what is included and how each item in the index is weighted — and include discussion about which items should be included and what weights they should be given.

So instead of teaching them one of the most basic mathematics skills, we should instead teach them how to add, subtract, multiply, and divide (the only arithmetic necessary to understand the CPI).

It's illuminating to see the liberal mind at work.  Depressing, but illuminating...
Posted by Unknown at (permalink) 6:54 AM No comments:

Cartoon of the Day: Redaction...

Posted by Unknown at (permalink) 6:41 AM No comments: