While walking down the street one day a Corrupt Senator (that may be redundant) was hit by a bus and died. His soul arrives in heaven and is met by St. Peter at the entrance.

"Welcome to heaven," says St. Peter. "Before you settle in, it seems there is a problem. We seldom see a high official around these parts, you see, so we're not sure what to do with you."

"No problem, just let me in," says the Senator.

"Well, I'd like to, but I have orders from the higher ups. What we'll do is have you spend one day in hell and one in heaven. Then you can choose where to spend eternity."

"Really?, I've made up my mind. I want to be in heaven," says the Senator.

And with that, St. Peter escorts him to the elevator and he goes down, down, down to hell. The doors open and he finds himself in the middle of a green golf course. In the distance is a clubhouse and standing in front of it are all his friends and other politicians who had worked with him. Everyone is very happy and in evening dress. They run to greet him, shake his hand, and reminisce about the good times they had while getting rich at the expense of the people. They played a friendly game of golf and then dine on lobster, caviar and the finest champagne. Also present is the devil, who really is a very friendly guy who is having a good time dancing and telling jokes. They are all having such a good time that before the Senator realizes it, it is time to go. Everyone gives him a hearty farewell and waves while the elevator rises.

The elevator goes up, up, up and the door reopens in heaven where St. Peter is waiting for him, saying "Now it's time to visit heaven...”

So, 24 hours passed with the Senator joining a group of contented souls moving from cloud to cloud, playing the harp and singing. They have a good time and, before he realizes it, the 24 hours have gone by and St. Peter returns.

"Well, then, you've spent a day in hell and another in heaven. Now choose your eternity."

The Senator reflects for a minute, then he answers: "Well, I would never have said it before, I mean heaven has been delightful, but I think I would be better off in hell."

So St. Peter escorts him to the elevator and he goes down, down, down to hell...

Now the doors of the elevator open and he's in the middle of a barren land covered with waste and garbage. He sees all his friends, dressed in rags, picking up the trash and putting it in black bags as more trash falls to the ground. The devil comes over to him and puts his arm around his shoulders.

"I don't understand," stammers the Senator. "Yesterday I was here and there was a golf course and clubhouse, and we ate lobster and caviar, drank champagne, and danced and had a great time. Now there's just a wasteland full of garbage and my friends look miserable. What happened?"

The devil smiles at him and says, "Yesterday we were campaigning. Today, you voted..."

Remember this when you vote in November!
Posted by Unknown at (permalink) 6:39 AM No comments:

Spirea henryi, or 翠蓝绣线菊, is a Chinese shrub that grows at altitudes of 4,000 to 10,000 feet. Photo courtesy of Botany Photo of the Day. 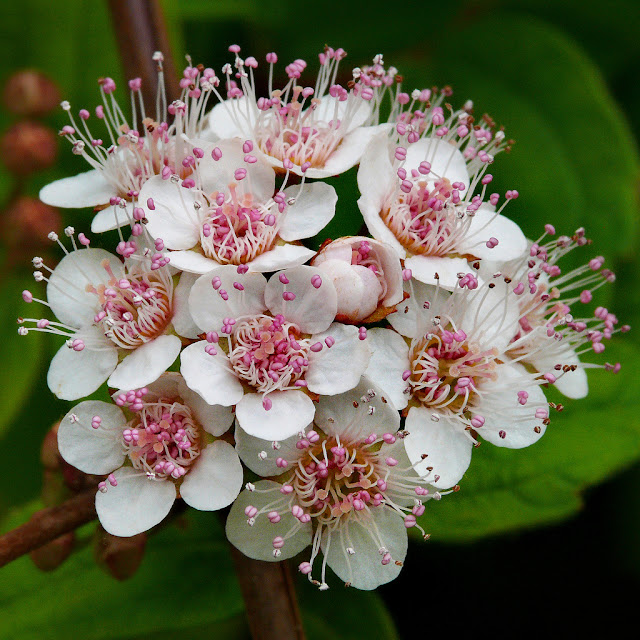 Posted by Unknown at (permalink) 6:33 AM No comments:

Creative Litigation of the Day...

From Austalia: Worker injured during sex gets compensation payout.
Posted by Unknown at (permalink) 6:29 AM No comments:

How Can They Be So Stupid?

Or is it that they think we're so stupid?  Maybe it's both...

The first amendment of the U.S. Constitution says:


Congress shall make no law respecting an establishment of religion, or prohibiting the free exercise thereof; or abridging the freedom of speech, or of the press; or the right of the people peaceably to assemble, and to petition the government for a redress of grievances.

That's the whole thing. It's simple, straightforward, and is one of the most important freedoms we have as Americans. The first amendment gives us a right that is surprisingly rare in this world, though most Americans don't realize it.

The first amendment was ratified as part of the “Bill of Rights” (the first ten amendments), on December 15, 1791 – some 220 years ago.  In all that time, nobody has ever seen the need to modify it.  It does its job quite admirably.

But now the Democrats (led by the harridan-in-chief Nancy Pelosi) want to change it.  In particular, they want to remove this freedom from corporations.  I suspect that their internal noodlings are that corporations, being businesses, are more likely to lean right – so shutting them up would be advantageous for Democrats.

This is a very dangerous step down the slippery slope.  You can bet on this: if they managed to amend the Constitution for reduce our freedom of speech for this reason, they'll keep trying to impose more restrictions.  But slippery slope aside, this is dangerous for another reason.  The law considers a corporation to be a person in a legal sense, and with very good reason: a corporation is nothing more than a collection of people (the shareholders).  Restricting freedom of speech for a corporation is exactly the same thing as restricting the speech of a group of people.  The argument is sometimes made that corporations are comprised of people who aren't necessarily Americans, and that's true.  But it's also true that foreigners in America have freedom of speech here.  So why would we treat them any differently simply because they're part of a group?

Thankfully, there's very little chance that Pelosi's amendment would ever be ratified.  The Founding Fathers made amending the Constitution very, very hard for a reason – and this is an excellent demonstration of that reason.  Their best hope to accomplish something like this is to pack the Supreme Court with allies – one of the main dangers of allowing Obama to stay in power.

Remember all this when you vote in November!
Posted by Unknown at (permalink) 6:27 AM No comments:

This is actually old news, but the Planetary Society's blog has a nice post with some new details.  The original mystery was that Pioneer 10 and Pioneer 11 were slowing down a tiny bit more than any known source could account for.  In a feat of data recovery and scientific analysis (paid for the by Planetary Society), Slava Turyshev and his colleagues figured out why: the nuclear power source (RGT) on board differentially radiated toward the direction of flight – acting like a teensy, tiny retro-rocket.  A very nice piece of scientific detective work, and an equally nice confirmation of radiation-induced acceleration...
Posted by Unknown at (permalink) 6:11 AM No comments:


The reason the story is news, and actually upsetting, is not that a government agency wasted money. That is not news. The reason it's news is that the people involved thought what they were doing was funny, and appropriate. In the past, bureaucratic misuse of taxpayer money was quiet. You needed investigators to find it, trace it, expose it. Now it's a big public joke. They held an awards show. They sang songs about the perks of a government job: "Brand new computer and underground parking and a corner office. . . . Love to the taxpayer. . . . I'll never be under OIG investigation." At the show, the singer was made Commissioner for a Day. "The hotel would like to talk to you about paying for the party that was held in the commissioner's suite last night" the emcee said. It got a big laugh.

Read the whole thing...
Posted by Unknown at (permalink) 6:05 AM No comments: