What IS That Thing?

It's an image of a pentacene molecule.
Posted by Unknown at (permalink) 4:40 AM No comments: 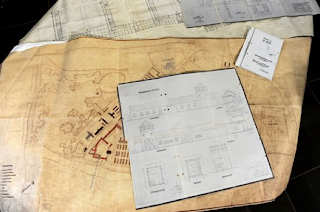 More than 60 years after the fact, detailed plans for the Auschwitz concentration camp have been found. Story here.

Posted by Unknown at (permalink) 4:35 AM No comments: 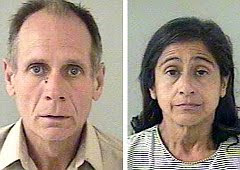 The story of Jaycee Lee Dugard is all over the news right now. She was kidnapped as a little girl (just 11 years old) and held captive for 18 years by the two mouth-breathers at right. The man is 58 year old Phillip Garrido, and he's a convicted rapist.

This is yet another example of our government failing to protect us from criminals – arguably the primary purpose of state and local governments in the first place. In this case, it's a known sexual predator released back into society with no practical constraints on his behavior. Examples like this, unfortunately, abound – and not just in California. This is a national problem.

It's hard for me to imagine anyone defending the current state of affairs with respect to how we deal with the Phillip Garridos of the world – but, in fact, there are many defenders of the status quo. Primarily these defenders can be found in two populations: politicians and academics, two groups notable for the isolation from the rest of us.

Personally I think that society's main tool for handling the Philip Garridos should be something like penal colonies, with hard work and short lifetimes the expected outcome. I'd love to see a never-ending stream of news stories emerging from such colonies about the horrors of incarceration therein – sounds like a great deterrent to me!

But I'd be accepting of nearly any change, as I can think of very few possibilities worse than what we do today (we could give them cash prizes, perhaps?)...

Posted by Unknown at (permalink) 4:14 AM No comments:

Sent to me by Isaac P., and found so many places on the web that I'm unsure where to attribute it:

I have been an NTL customer since 9th July 2001, when I signed up for your 3-in-one deal for cable TV, cable modem, and telephone.

During this three-month period I have encountered inadequacy of service which I had not previously considered possible, as well as ignorance and stupidity of monolithic proportions.

Please allow me to provide specific details, so that you can either pursue your professional prerogative, and seek to rectify these difficulties – or more likely (I suspect) so that you can have some entertaining reading material as you while away the working day smoking B&H and drinking vendor-coffee on the bog in your office:

My initial installation was cancelled without warning or notice, resulting in my spending an entire Saturday sitting on my behind waiting for your technician to arrive.

When he did not arrive at all, I spent a further 57 minutes listening to your infuriating hold music, and the even more annoying Scottish robot woman telling me to look at your helpful website…. how?

I alleviated the boredom to some small degree by playing solitaire for a few minutes – an activity at which you are no-doubt both familiar and highly adept.

The rescheduled installation then took place some two weeks later, although the technician did forget to bring a number of vital tools – such as a drill-bit, and his cerebrum.

A total of six weeks after I had requested it, and begun to pay for it.

I estimate that the downtime of your internet servers is roughly 35%… these are usually the hours between about 6pm and midnight, Monday to Friday, and most of the useful periods over the weekend.

I am still waiting for my telephone connection. I have made 9 telephone calls on my mobile to your no-help line this week, and have been unhelpfully transferred to a variety of disinterested individuals, who are it seems also highly skilled malarky jugglers.

Doubtless you are no-longer reading this letter, as you have at least a thousand other dissatisfied customers to ignore, and also another one of those crucially important solitaire to attend to. Frankly I don’t care, it’s far more satisfying as a customer to voice my frustrations in print than to shout them at your unending hold music.

Forgive me, therefore, if I continue.

I thought BT were horrible, that they had attained the holy pot of god-awful customer relations, that no-one, anywhere, ever, could be more disinterested, less helpful or more obstructive to delivering service to their customers. That’s why I chose NTL, and because, well, there isn’t anyone else is there? How surprised I therefore was, when I discovered to my considerable dissatisfaction and disappointment what a useless shower of jerks you truly are. You are sputum-filled pieces of distended intestine – incompetents of the highest order. British Telecom – jerks though they are – shine like brilliant beacons of success, in the filthy puss-filled mire of your seemingly limitless inadequacy.

Suffice to say that I have now given up on my futile and foolhardy quest to receive any kind of service from you. I suggest that you do likewise, and cease any potential future attempts to extort payment from me for the services which you have so pointedly and catastrophically failed to deliver – any such activity will be greeted initially with hilarity and disbelief – although these feelings will quickly be replaced by derision, and even perhaps a small measure of bemused rage.

I enclose two small deposits, selected with great care from my cats litter tray, as an expression of my utter and complete contempt for both you and your pointless company. I sincerely hope that they have not become desiccated during transit – they were satisfyingly moist at the time of posting, and I would feel considerable disappointment if you did not experience both their rich aroma and delicate texture. Consider them the very embodiment of my feelings towards NTL, and it’s worthless employees.

Have a nice day – may it be the last in you miserable short life, you irritatingly incompetent and infuriatingly unhelpful bunch of jerks.

Excellent!
Posted by Unknown at (permalink) 4:07 AM No comments: