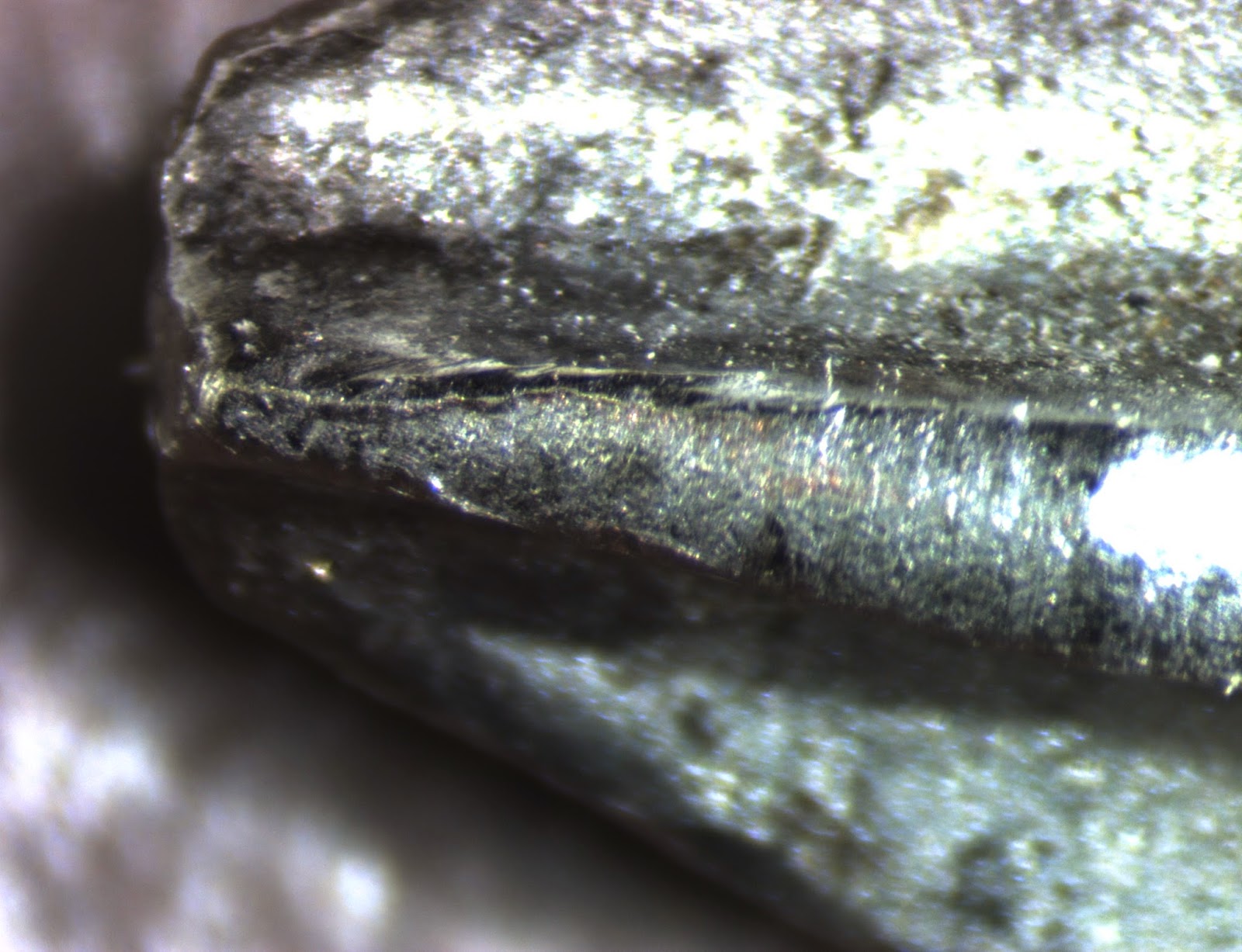 Screwdriver wear...  While installing the last replacement ceiling fan today, I noticed that the Phillips screwdriver no longer felt as crisply “tight” in the screws as it used to.  I couldn't see anything different about it upon visually inspecting it, so I stuck it under the microscope.  At 60x, it's very clear what's happened: some of the metal has been deformed, squished out of shape.

This particular screwdriver is a high-quality (German) Wiha, made with very hard, tough steel – one of the best you can buy.  I got it about 18 months ago, and it's been used a lot – first with my FJ Cruiser modification project, and now for the past six months during remodeling our new home.  I suspect this sort of wear is inevitable when you are frequently applying great force onto a small metal face...
Posted by Unknown at (permalink) 5:16 PM No comments:

UPS brought me a present today! 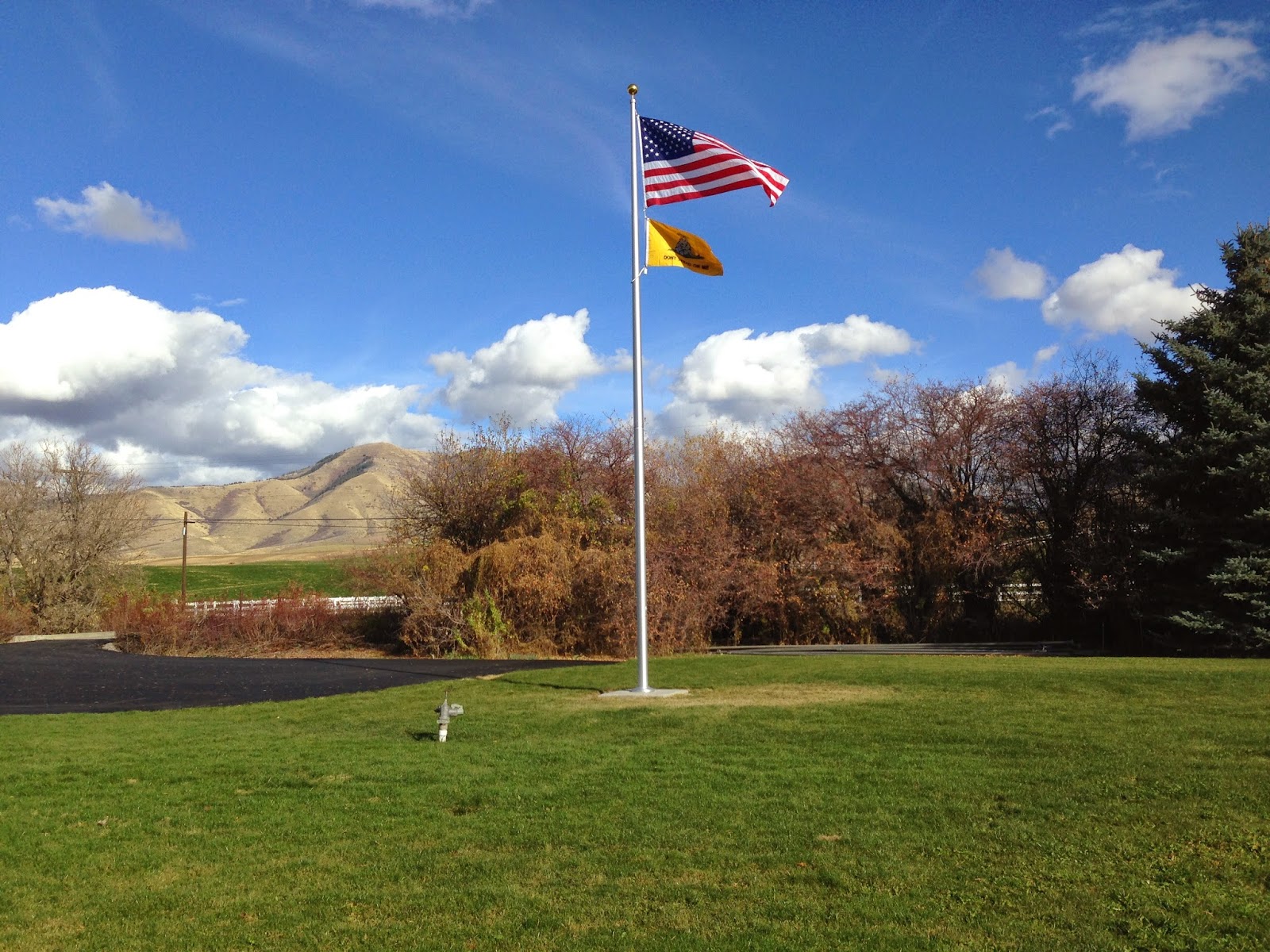 UPS brought me a present today!  A beautifully made embroidered Gadsden flag, the famous yellow flag with the coiled serpent and the motto “Don’t Tread on Me” (listen up, Obamanation!).  I lofted it right underneath Old Glory just as fast as I could get it out of its package.  Just as I raised it, the wind picked up and unfurled both flags – almost as if the wind was trying to help.

The construction of this particular flag is impressive.  First, it's actually two flags stitched together back-to-back, so that the flag looks correct from both sides.  Second, each blob of black or white for the serpent, and the green grass the serpent sits on, is actually a piece of cloth cut out in the right shape, then stitched into place with an embroidered border – it looks practically indestructible.  Finally, the letters are entirely embroidered.  For the price ($25 including shipping) it's an amazing bargain.  I'd be willing to bet that the entire construction of the flag is automated: a computer-controlled laser to cut the cloth pieces, an industrial robot to place them on the yellow background, and a computer-controlled sewing machine to do the rest.  I can't imagine how else they could sell a product this nicely made for that price...
Posted by Unknown at (permalink) 3:06 PM No comments:

“...a government with vast and arbitrary power to punish people who have done no wrong.”

“...a government with vast and arbitrary power to punish people who have done no wrong.”  The last part of the last sentence of Megan McArdle's excellent piece on some of the many the ways our government is abusing us.  You shouldn't miss it.

Really, you shouldn't miss anything Ms. McArdle writes, because the worst of it is better than almost anything else you'll read on economics, politics, policy, and cooking...
Posted by Unknown at (permalink) 12:19 PM No comments:

Alleged letter to columnist Clarence Page of the Chicago Tribune...

Alleged letter to columnist Clarence Page of the Chicago Tribune...  I've no idea if this is authentic, but I don't care :)

I always love your articles and I generally agree with them. I would suggest, as in an email I received, they change the name to the "Foreskins" to better represent their community, paying tribute to the dick heads in Congress.

I agree with our Native American population. I am highly insulted by the racially charged name of the Washington Redskins. One might argue that to name a professional football team after Native Americans would exalt them as fine warriors, but nay, nay. We must be careful not to offend, and in the spirit of political correctness and courtesy, we must move forward.

Let's ditch the Kansas City Chiefs, the Atlanta Braves and the Cleveland Indians. If your shorts are in a wad because of the reference the name Redskins makes to skin color, then we need to get rid of the Cleveland Browns.

The Carolina Panthers obviously were named to keep the memory of militant Blacks from the 60's alive. Gone. It's offensive to us white folk.

The New York Yankees offend the Southern population. Do you see a team named for the Confederacy? No! There is no room for any reference to that tragic war that cost this country so many young men's lives.

I am also offended by the blatant references to the Catholic religion among our sports team names. Totally inappropriate to have the New Orleans Saints, the Los Angeles Angels or the San Diego Padres.

Then there are the team names that glorify criminals who raped and pillaged. We are talking about the horrible Oakland Raiders, the Minnesota Vikings, the Tampa Bay Buccaneers and the Pittsburgh Pirates!

The New York Giants and the San Francisco Giants promote obesity, a growing childhood epidemic. Wrong message to our children.

The Cincinnati Reds promote downers/barbiturates. Wrong message to our children.

The Milwaukee Brewers. Well that goes without saying. Wrong message to our children.

So, there you go. We need to support any legislation that comes out to rectify this travesty, because the government will likely become involved with this issue, as they should. Just the kind of thing the do-nothing Congress loves.

As a diehard Oregon State fan, my wife and I, with all of this in mind, suggest it might also make some sense to change the name of the Oregon State women's athletic teams to something other than "the Beavers." 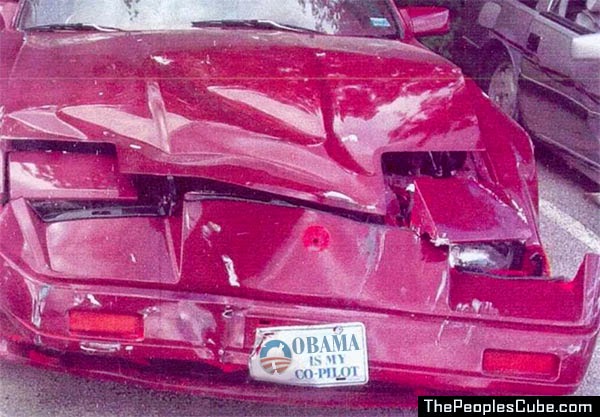 
Dyson's answer to Roomba...  Dyson's vacuum cleaners are awesome – we've owned two so far, and nothing else we've tried even comes close.  Not long ago, they announced that they'll soon have a competitor to Roomba, the robotic vacuum cleaner.  Only – because it's Dyson – it will, like, actually work.  I've no idea what they're going to sell for, but given the technology involved I suspect it will be at a considerable premium over Roomba.  With three floors in our house, we'd have to have three of the things, unless Dyson also figured out a way for it to climb up and down stairs.  Needing three would probably put it out of our price range.  But I can still admire the technology...
Posted by Unknown at (permalink) 6:53 AM No comments:

ER doc: what scares me even more than Ebola...

ER doc: what scares me even more than Ebola...  Good piece, in LinkedIn, of all places...
Posted by Unknown at (permalink) 6:48 AM No comments:

Hypothetical American vs. actual Canadian...  Try to imagine this scenario: the U.S. Congress is left unguarded by any armed men (unthinkable, actually, because pissed off Americans would almost certainly eliminate some Congress-critters in short order).  A lone and heavily armed Islamic terrorist attacks, shooting wildly.  The Senators and Representatives lock themselves into chambers.  What would happen next?

In my imagination, Pelosi would start up a non-stop screeching, demanding help in the form of a helicopter ride out.  Harry Reid would hide under a chair.  McConnell would be a puddle of protoplasm in a corner, wobbling like Jello.  Boehner would be crying in another corner.  A few – Cruz and Ryan come to mind – might actually try to put up some kind of defense as the terrorist approaches.  Overall, though, the security cameras would show us a pathetic scene.  Any other outcome seems ... not credible.

Contrast that with what actually happened in Ottawa last week, when a heavily armed Islamic terrorist actually attacked their Parliament.  With no other weapons at hand, MPs (the rough equivalent of our Senators and Representatives) fashioned spears from flagstaffs, and positioned themselves at the doorway to the chambers, ready to impale the terrorist if he tried to enter.  They had no need, though, because their Sergeant-at-Arms shot him dead with his sidearm.

Canadians: showing more American spirit than Americans...
Posted by Unknown at (permalink) 6:22 AM No comments:

“This is delusional thinking.”

“This is delusional thinking.”  Aly Salem is an Egyptian writer based in New York, and a Muslim.  He understands how the delusional progressive narrative about Islam – exemplified by Obama's speeches on the subject – is hurting America and its ability to fight the scourge of radicalized Islamic fundamentalists.  It's the sort of writing and thinking that we hear far too little about, though I know (from my own experience) that it's by far the most prevalent thinking in the American Muslim community...
Posted by Unknown at (permalink) 6:08 AM No comments: