Via friend and reader Larry E., who pointed this out in comments yesterday.  I'd never heard this song before at all, much less Johnny Cash's cover of it.  Beautiful:

Romney holds a slight, within-the-margin-of-error lead in many national polls.  In the majority of the state polls in the “swing states” (the only ones that actually matter with respect to deciding between Obama and Romney), Romney is behind – and often by a margin greater than the margin-of-error.  Obama's leads in the swing state polls, if those polls are honest and accurate, really should be dispositive.  If you share my objective of booting Obama back to Chicago, this is very disheartening.

On the other hand, there are many promising indicators for Romney, including the crowd size and enthusiasm at the Romney/Ryan campaign events and the growing number of surprising endorsements.  There's also the distinct possibility that those state polls (most of them done by smaller, less professional organizations) are not entirely honest, or not entirely accurate.  Politicians routinely commission polls that are designed to show that they're in the lead (typically by over-sampling their own party with some flimsy excuse about why).  So those polls could plausibly be just so much bullshit.  There are a lot of those polls, though.

The one tool we have that plausibly removes all the state-vs.-national polls confusion, bias, and manipulation are the electronic markets (primarily the Iowa Electronic Markets and Intrade).  The prices in those markets reflect the assessment of thousands of individuals who are willing to bet real money on their horse politician.  The Iowa Electronic Markets has been up and running since the 1992 presidential election, and they've accumulated an impressive track record of accuracy over those years – especially as the election date draws to within a few weeks.  That's not to say that they're never wrong, because they have been wrong.  But they are the best pre-election indicator I know of.

And here's what it looked like this morning.  Not encouraging, if you'd like to see Obama given the boot.  All I can do is hope that this is one of those years that the Iowa Electronic Markets are wrong... 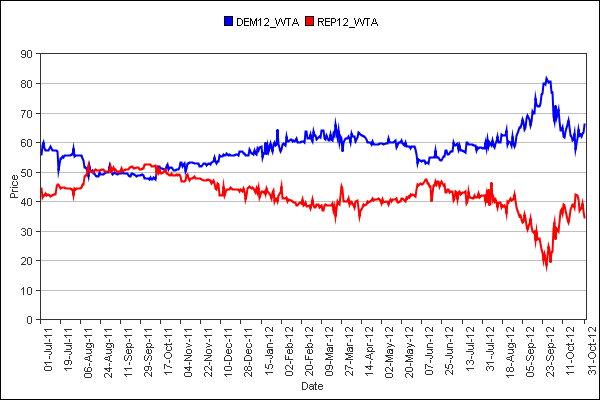 I had an interesting conversation with a colleague a few days ago concerning the possibility of deliberate manipulation of the two electronic markets. Could it be done?  The answer is “Yes, albeit with considerable effort.”  If someone bent on manipulation wanted to raise the apparent odds in favor of Obama, all they would have to do is offer to buy Obama contracts at a higher-than-actual-market price.  Someone on the other side would be happy to take those contracts if they believed Romney's odds were actually higher.  To actually influence the odds over the long term, the manipulator would have to keep an order at the higher price.  Sounds easy, and the overall market float isn't that large, so one could imagine doing this for something on the order of a few million dollars, maybe much less.  In the Iowa Electronic Markets (not sure about Intrade) there is a problem with this approach: each speculator is capped at $500.  This is defeatable as well: the manipulator could simply continuously create new accounts on the Iowa Electronic Markets, capping them out one after the other.  There may be some safeguards preventing this, but if there are, it's not obvious to me.

Now...would this actually be practical?  And would it be worth the effort and money to do so?  Is the Iowa Electronic Market actually a significant influence?  I suspect not, on all counts.  I'm skeptical that the Iowa Electronic Markets are anything other than what they appear to be: nearly the only unbiased, clean source of predictive data about the election.
Posted by Unknown at (permalink) 7:00 AM No comments: