Curiosity ... is into some new and exciting things as it climbs Mt. Sharp on Mars!  These are from today's dump of raw images, and there aren't any notes on them yet.  The first one, to my amateur rockhound's eye, fairly screams “water!”  Those whitish deposits look like minerals that crystallized after having been dissolved in water; we see things like that on Earth all over the place.  The second photo appears to be taken looking across the slope that Curiosity is climbing – it looks fairly steep, though I'm not sure the camera was level when it was taken.  It also looks quite hazy, presumably from dust and not water vapor... 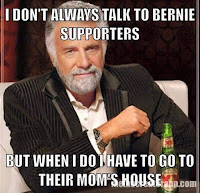 Morning chuckle...  Via my lovely bride, who found this in some dark corner of Facebook (which really is just a giant bucket of dark corners)...

Update: Debbie tells me it was The Federalist Papers web site where she found that, not Facebook.  But Facebook is still just a giant bucket of dark corners...
Posted by Unknown at (permalink) 6:18 AM No comments:

Chladni patterns...  This video is a great introduction to the magic of Chladni plates and the patterns one can make on them.

I first ran into these back in the '80s, when I was doing some consulting work for a company that was using microphones listening to rotating machinery to monitor for impending failures.  The most success they had was with ball bearings, where some (relatively) simple fast Fourier transforms could be used successfully.  Even the slow computers of the day could do this math in near real time.  The company wanted to do some more sophisticated things (which is where the Chladni patterns came in) that involved math that they just couldn't make fast enough.

They hired me to optimize those calculations by using assembly language and every hacky trick I could come up with.  They needed to speed up their calculations by a factor of about 1,200, but the best I could do was about 200 – still six times too slow.  I could only get that large speedup because the program they started with was written by scientists who basically had no idea how computers worked :)  They chose a terrible language (FORTRAN) for such a project, then compounded the error by writing terrible code.  It was great fun for me, because they were completely blown away by (a) how fast my code was, and (b) how small my code was – the assembly-language program I wrote was half the lines of their (horrible) FORTRAN code.  Also fun: they paid me on time, with a check that cleared...
Posted by Unknown at (permalink) 6:07 AM No comments:

Norman doors...  The video at right, despite coming from Vox, is an excellent introduction to human-centered design (no technical content at all).  The “Norman” is Don Norman, whose work inspired a lot of how we experience computers today.  Note carefully, please, that I am not saying that his ideas have been well-executed :)   Obviously, in many cases, they have not (I'm looking at you, Microsoft!).  But much of what's good about the user interfaces on modern computers can be traced back to his work.

I attended a lecture of his back in the '90s, when his work was just becoming well-known amongst software engineers.  Then, later, I went to a short course he ran (which the company I worked for then helped sponsor), and had a delightful dinner with him.  He went through everything on the table and analyzed how well (or not) it was designed, from a human perspective.  It was so much fun!  But also one hell of a learning experience.

He looked much younger then :)

There is one thing that I think is a bit misleading in this short video, to wit: the video makes it sound obvious and easy to get the design right.  At least with computer user interfaces, that is the exact opposite of the truth.  Why?  Because discoverability and feedback are highly variable from person-to-person.  Someone like me who has been using computers for almost 50 years might find a subtle change in color to be useful and appropriate feedback.  Similarly, I might find a right-click menu to be an obviously discoverable element.  Another person, however, might need a giant purple blinking square, with 50 watt audio accompaniment, before they'd ever notice the feedback.  And that same person might never think of trying a right click – you might as well have buried that feature in a 10 ton block of concrete, as they will never find it.  User interface designers constantly face this challenge: the interfaces they design must be usable by novices, but still useful to experts.  Sometimes a single design can do this well, but that's relatively rare.  More often, the job is either done poorly, or sometimes the only answer is to have multiple designs – one for the noobs, another for the dweebs...
Posted by Unknown at (permalink) 5:52 AM No comments:

Coloring books and Trump...  Rob Long, writing on Ricochet, makes an excellent point...
Posted by Unknown at (permalink) 5:15 AM No comments: