Bob Orlosky was acquitted of murder charges, and the jury deadlocked on manslaughter charges, after Orlosky was tried for fatally shooting Charles Crow, 23, and wounded Hector Monget, 28, on Dec. 1, 2006. A retrial on the manslaughter charges is scheduled for October. Meanwhile, prosecutors added a new charge (personally using a firearm causing great bodily injury or death), and Orlosky's attorney fought to have it removed.

The judge said that based on state Supreme Court rulings in similar cases, “there was no justification” for prosecutors to add an allegation after the trial that would have substantially increased Orlosky's possible prison sentence at a new trial. He said there was no evidence that prosecutors were out to get Orlosky or Pfingst because of the earlier acquittal, but that filing the allegation fit the legal definition of vindictive prosecution.

Agreeing with Pfingst's argument, Hanoian (the judge) said that under Supreme Court rulings, a new or stiffer charge cannot be added after a trial unless it's based on new evidence or information that wasn't available to prosecutors at the time of the initial trial.

A good day for Bob Orlosky, but this is just a skirmish – the main battle still lies in the future...
Posted by Unknown at (permalink) 6:44 PM No comments: 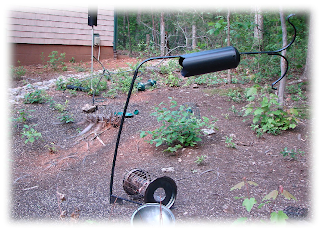 My sister (Holly) wrote to say that her bird feeders had been demolished by a bear. More photos of the ursine destruction here. She and her husband live in an uncivilized and wild part of Virginia, where apparently bears (and who knows what other beasts) rampage with impunity.

I think this is more evidence (as if we needed any more!) of the vast squirrel wing conspiracy. It's obvious that the corrupt bears are controlled by their squirrel puppet-masters, destroying the “squirrel-proof” feeders so as to expose all those delicious seeds to the greedy squirrels. Kind of like the drug cartels in Mexico corrupting the Mexican “police”...

# 9. You can keep one gun at home and have another for when you're on the road.

# 8. If you admire a friend's gun and tell him so, he will probably let you try it out a few times.

# 7. Your primary gun doesn't mind if you keep another gun for a backup.

# 6. Your gun will stay with you even if you run out of ammo.

# 4. Guns function normally every day of the month.

And the number one reason a gun is favored over a woman...

Debbie didn't think this was as funny as I did
Posted by Unknown at (permalink) 5:20 AM No comments: