Punctuation can be important...

Punctuation can be important...  More examples of the importance of language “trivialities...”
Posted by Unknown at (permalink) 10:04 AM No comments:

“It looks really ancient!”  So declares a modern kid, upon being presented with a ... typewriter.

They'd probably say that about me, too :)
Posted by Unknown at (permalink) 10:01 AM No comments:

The last balls standing...  The nanny state vs. the balls...
Posted by Unknown at (permalink) 9:51 AM No comments:

Barn: elevations...  Mere seconds after I posted the last entry, the barn builders showed up to “stake out” the barn and to take “elevations” for the barn's foundation.  The objective of this work was to precisely locate where the outside corners of the barn's concrete foundation would go, and to determine exactly where the top of the barn's floor and the top of the foundation wall would be.  In the process, they also collect the information required to tell them where the bottom of the “footings” will be.

Footings are a critical part of any foundation.  They are steel-reinforced concrete structures that are underground, and they are the primary weight-bearing part of the foundation.  In the case of our barn, there are two kinds of footings.  The first one is an underground “wall” all the way around the barn.  The studs that support most of the second floor and roof rest on this.  The second kind of footings are interior footings that will go under a series of steel beams that support the center part of the second floor and roof.  These footing will be square concrete pillars, upon which the steel supports will rest.

The way that these things are done has changed over the years, especially shooting the elevations.  Before about 15 years ago, elevations were taken by using an instrument called a “surveyor’s level”.  I own a modern version of a surveyor's level, and I'm very familiar with how to use them.  They're a precision instrument that uses a combination of machinery and optics to very precisely locate a point that's at exactly the same height as the level itself.  It took two people to shoot elevations this way: one to operate the surveyor's level, the other to walk around with a “stick”: a rod held vertically that has precise elevation markings on it.

The modern way of doing this uses a rotating laser (like an old fashioned lighthouse) that sweeps out a perfectly level plane (left photo below) – a “laser level”.  Then you can take its companion gadget – a precision laser receiver – anywhere within 825' of the laser and you can locate a point on that level plane, in seconds.  This can be done with a single person, since there's nothing to do at the laser level itself.  This particular laser level has an accuracy of 3/32" in 100' – more than good enough for any construction work.  The first step is to generate a benchmark.  In this case, the top of the barn's floor is the reference benchmark, and in the middle photo below that's being marked on a benchmark stake.  Then at each of the four corners the laser receiver was used to find the reference plane, and a simple subtraction told us how far down the bottom of the footing needed to be.  The whole job was done in just a few minutes – much, much more easily than the old-fashioned way with a surveyor's level.  Let's hear it for lasers! 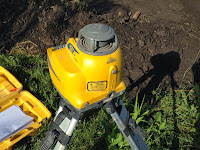 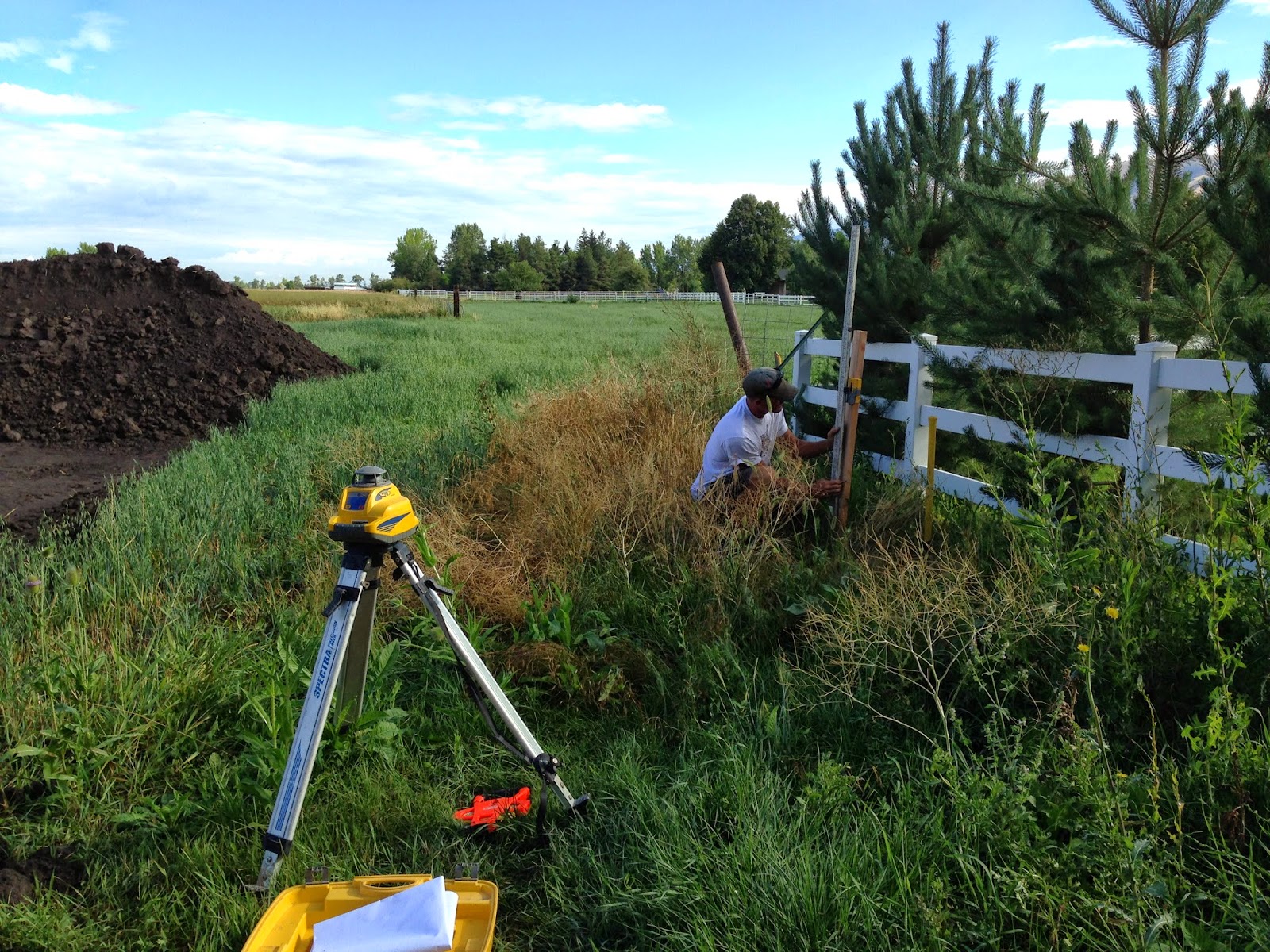 Posted by Unknown at (permalink) 9:49 AM No comments: 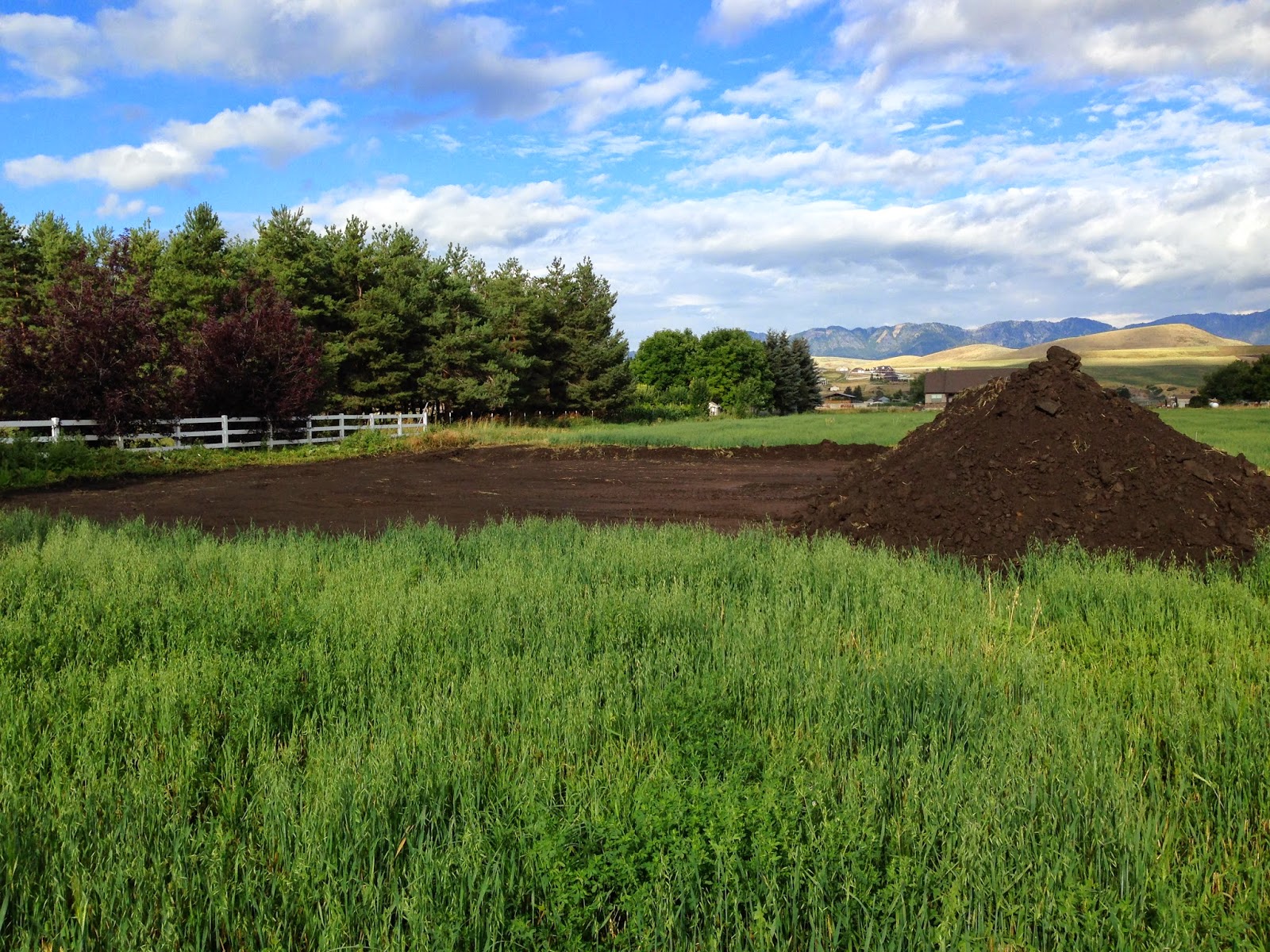 The barn begins!  A loader came out yesterday and scraped off a (roughly) foot of topsoil from the area where our new barn will be built.  The view at right (click to embiggen) is looking to the west.

This is over two months later than originally planned, but ... it's started.  The contractor promises completion 115 days after actual start, so that makes our tentative completion date around Thanksgiving...
Posted by Unknown at (permalink) 8:08 AM No comments: