Never give up...
Posted by Unknown at (permalink) 2:47 PM No comments: 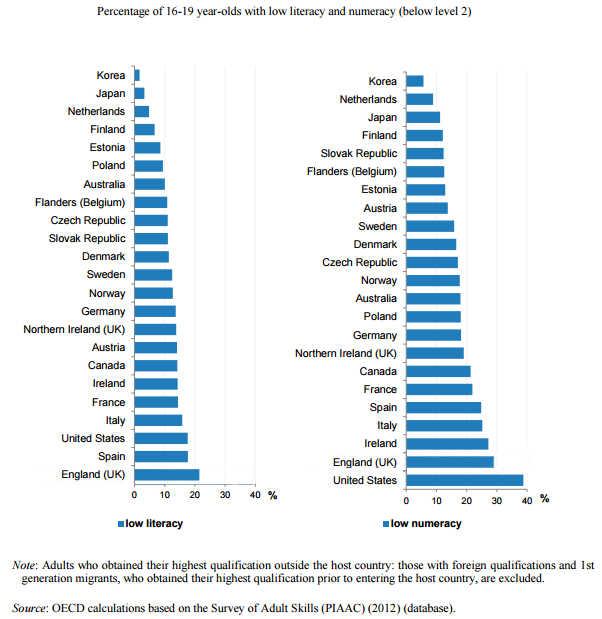 So sad...  The graph at right (click to embiggen; source) jibes with my own experiences hiring people here in the U.S. vs. in Estonia and Russia.  I still remember my utter shock when I first evaluated potential employees in Estonia, back in '93 – their superior math and science knowledge, in particular, were simply stunning when compared with typical American candidates.

A few years ago, I sent the video at left to a friend of mine in Estonia.  His response?  He was positive it was a put-on, that those couldn't be real people randomly interviewed on the street.  No adult, he said, could really be that ignorant.

Learning to read...  I started reading at a very young age, and a large part of the credit for that goes to my mom.  I have no memory at all of my earliest brushes with reading, just stories about it that mom told me years later.

According to her, when I was three (but nearly four), she was reading a kid's story out loud to me, and I asked her how she was doing that.  She sat me in her lap, put the book down in front of me, and started pointing to the words as she read them.  After that, I apparently insisted on her doing that whenever she read to me; for some reason the act of reading fascinated the young me.  Mom told me that by the time we'd read a few books like this, I was recognizing many words – and learning how to pronounce them from their spelling.  She didn't use any sort of method or curriculum to teach me, just the examples and practice – and lots of encouragement.  We had several hundred books at home, many of them inherited from my paternal grandparents.  Many of these books were aimed at children or juveniles (such as the Uncle Wiggly series by Howard Garis, and the Dr. Doolittle series by Hugh Lofting).  By the time I entered first grade (I never went to kindergarten; back then parents had the choice of skipping it), I was reading books on my own.

Mom told me that she tried the same thing with my brother Scott and my sister Holly, but neither of them (as toddlers) had the same interest in it that I did.  Both are avid readers as adults, but they didn't start as young as I did.

The first was reading novels from the Reader's Digest Condensed Books that my parents were buying almost from their outset in 1950.  We had dozens of these books on our shelves, and each of them contained about five novels (and sometimes, non-fiction).  These were my introduction to adult literature.  Their shorter length and dumbed-down vocabulary were absolutely perfect for me at that time.  When I first started reading them, mom would check the novels first to make sure I wasn't reading something she thought I shouldn't.  Then she discovered that prohibiting a particular volume just made me want to read it more – so she gave up :)  There were quite a few occasions when she had some conversations with me that were very awkward for her, when I started asking about things I'd read in the novels.  She consistently encouraged me to read them, though.  I devoured those books; by the time I was about ten I'd read every one we owned, and longed for more.

The second clear memory was when I was eight years old, not long after my birthday, and mom coming home from a yard sale with a complete copy of the World Book Encyclopedia from the early '50s, in great condition.  She was very excited about it, as she hoped it was something I would be able to learn from.  I don't think she expected what my reaction was: I was determined to read the entire thing.  I did, too, though it took me several years to do it.  I spent a lot of time with a dictionary by my side while I did that, and I remember sometimes having to read whole sets of articles that cross-referenced each other.  That was a real challenge for the small me!  All through that period, my mom was encouraging me to keep at it.  Of course I couldn't assimilate all that knowledge to be found in those volumes, but the breadth of exposure to ideas and facts that reading gave me has benefited me for my entire life.  I remember that period as transformative for me, most especially for the introduction to science, math, technology, and history those volumes gave me.  They also introduced me to the very idea of learning from books (sans teacher), and that's something I've been doing all my life since then.

I never would have done that reading without my mom's help and prodding – and without that reading, I'm certain my life would have taken a very different course...


You were probably 4 or 5 when you could read a lot. I wanted to be like you and I tried reading but every book I tried was boring as hell except for science fiction. When I was 5 or 6 years old I read Jules Verne's 'Mysterious Island'. It was a spine tingling sensational experience for me. I felt like I was there with the characters exploring that island and meeting Captain Nemo. It was a real joy for me to read this book even though I was a very slow reader, and that's when I got hooked on reading which for me was mostly cartoons, comic books and science fiction. So when I wasn't drawing or working on the farm (90% of my spare time) - I would read. I remember bragging about how young I was when I read that book as I was proud as heck with myself for accomplishing this at this age as soon as I put the book down.  That was a fat book.

Posted by Unknown at (permalink) 11:27 AM No comments:

You know you're having a bad day...

You know you're having a bad day ... when you make a network cable that tests bad (one open conductor), so you replace both ends – and it still tests bad!  That's exactly what just happened to me.  I couldn't believe it when the cable tested bad after replacing both new ends I'd just installed.  I tracked it down: there was actually a flaw in the cable itself, a place where one conductor got kinked and broke.

First time that has ever happened to me, in over 50 years of building electronic gear.