Cattery...  Our basement cattery is now full of cats!  It looks much better that way.  There are five black cats in here, plus two multicolored ones.  Six of them are wandering about, but one (Kama) is in jail (one of the carriers) because he's picking on the others.  We may be putting him on Prozac (seriously – it works on cats, too).  Some photos: 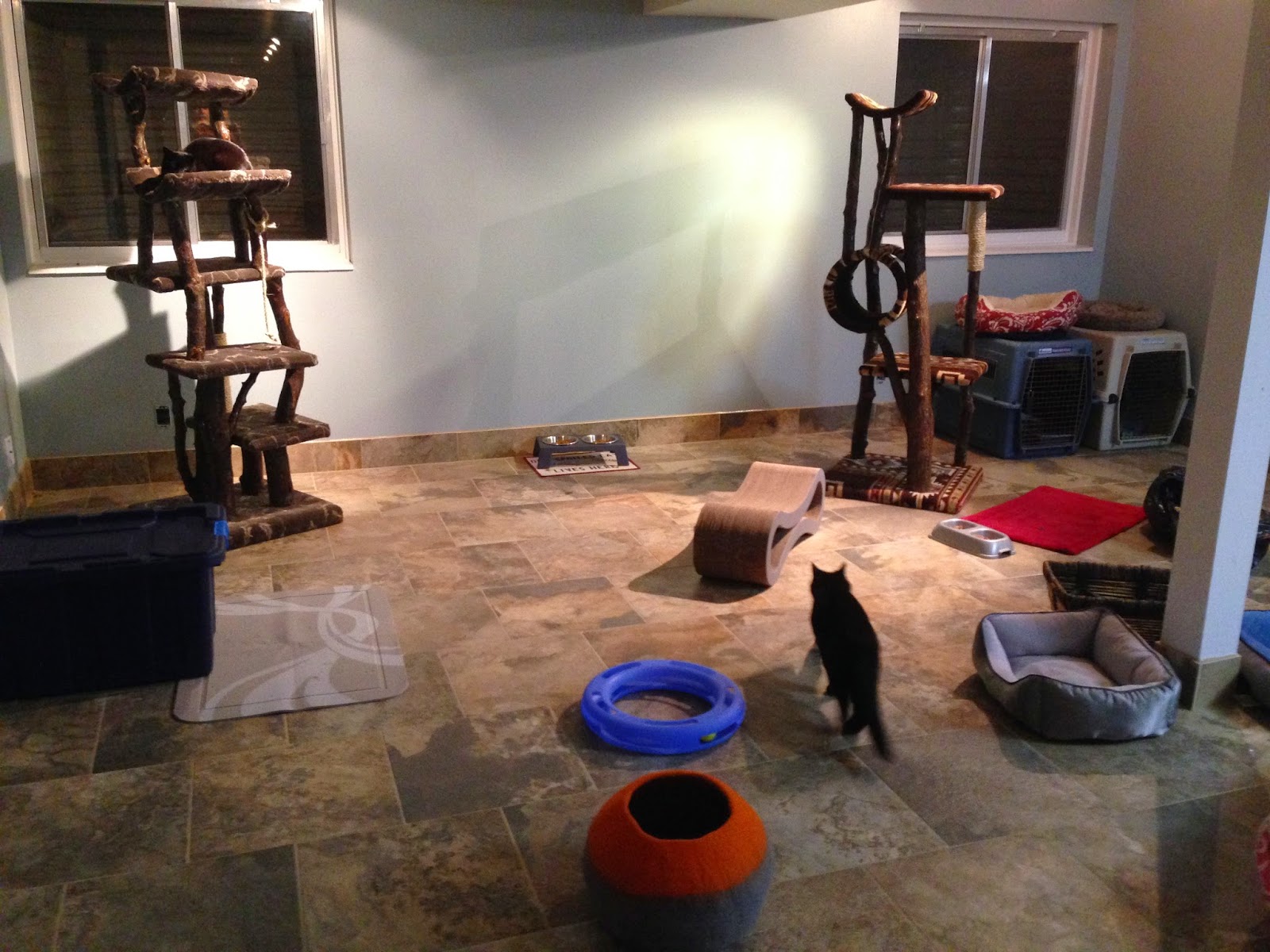 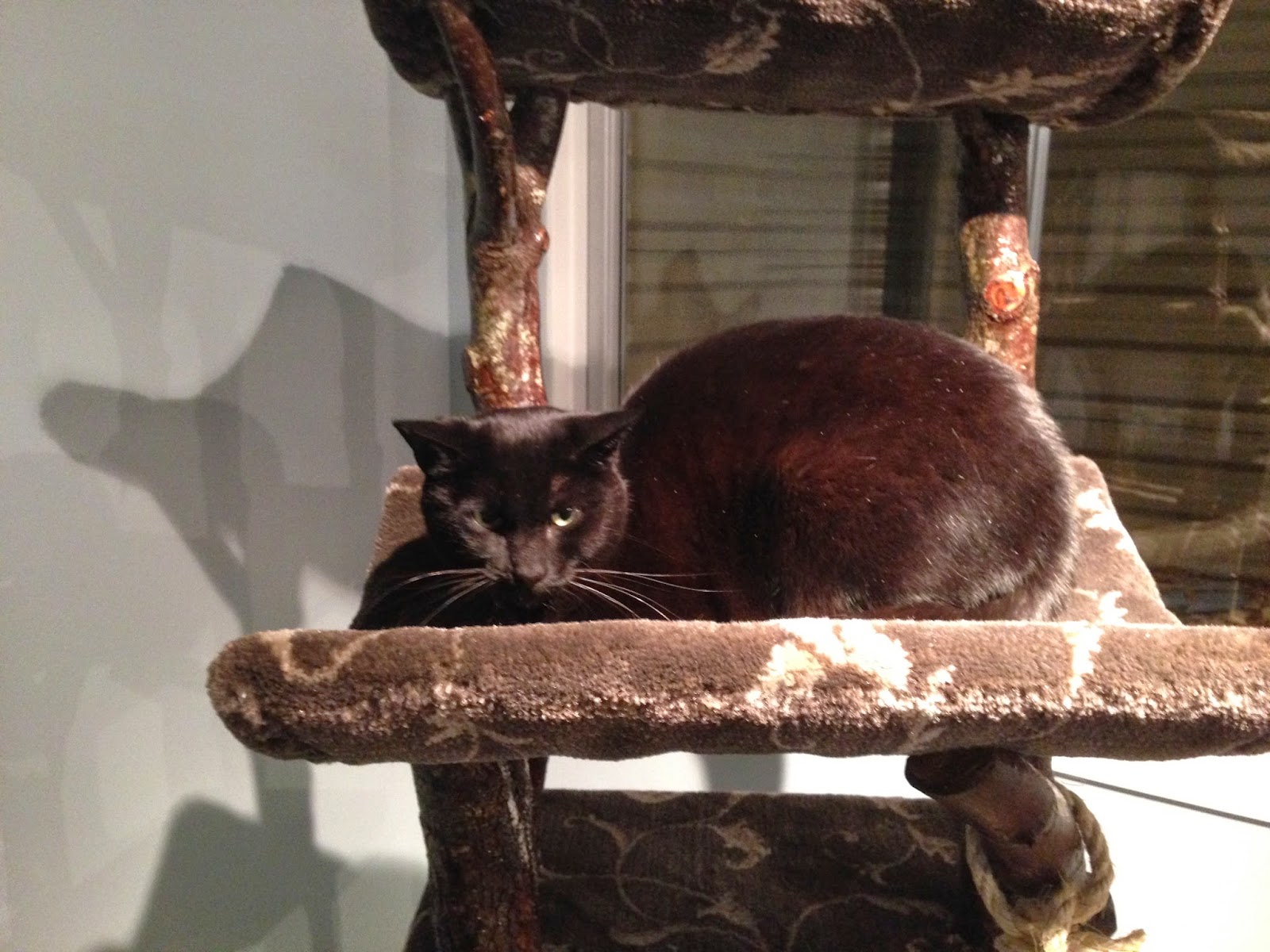 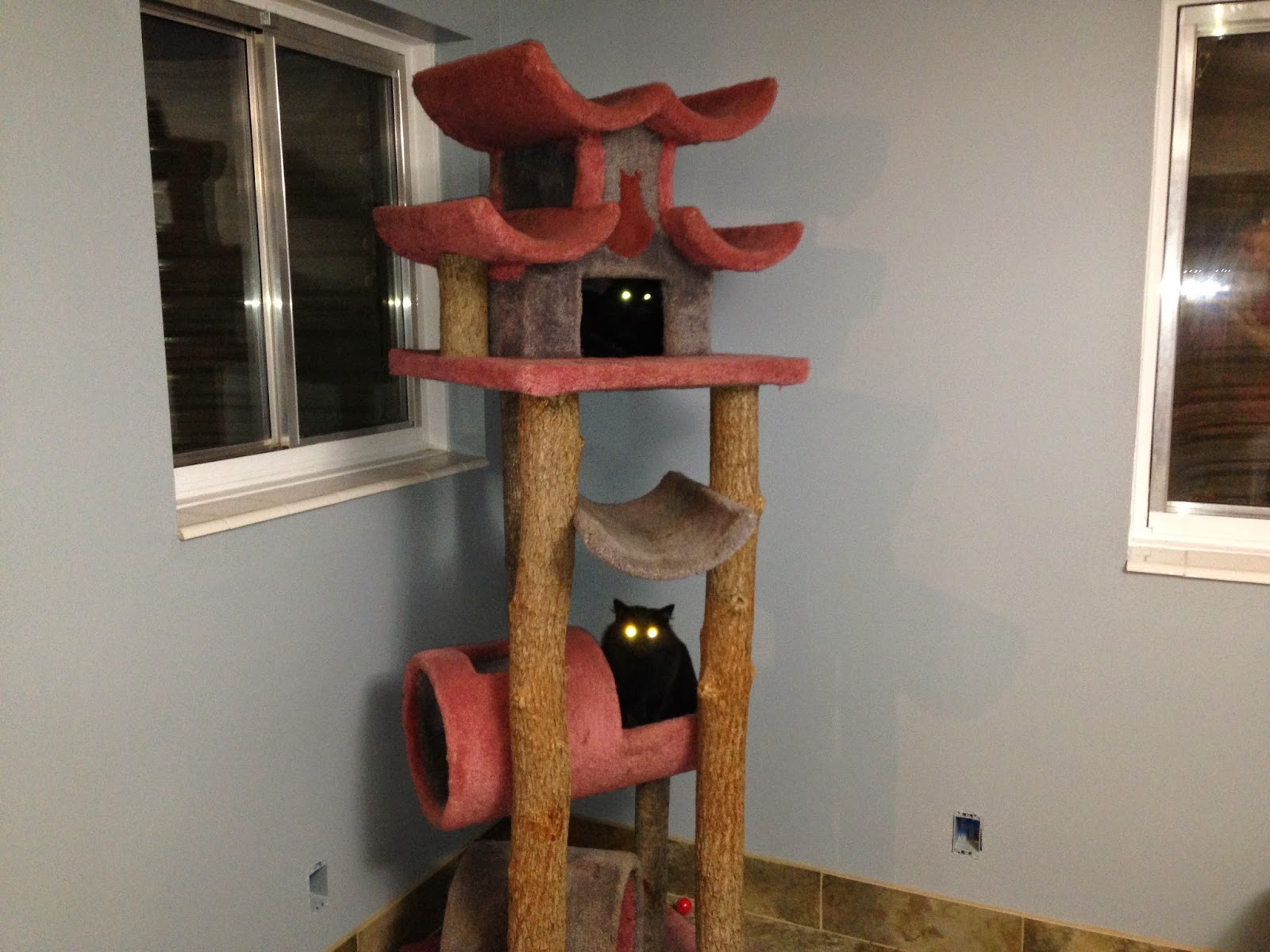 Posted by Unknown at (permalink) 6:25 AM No comments: 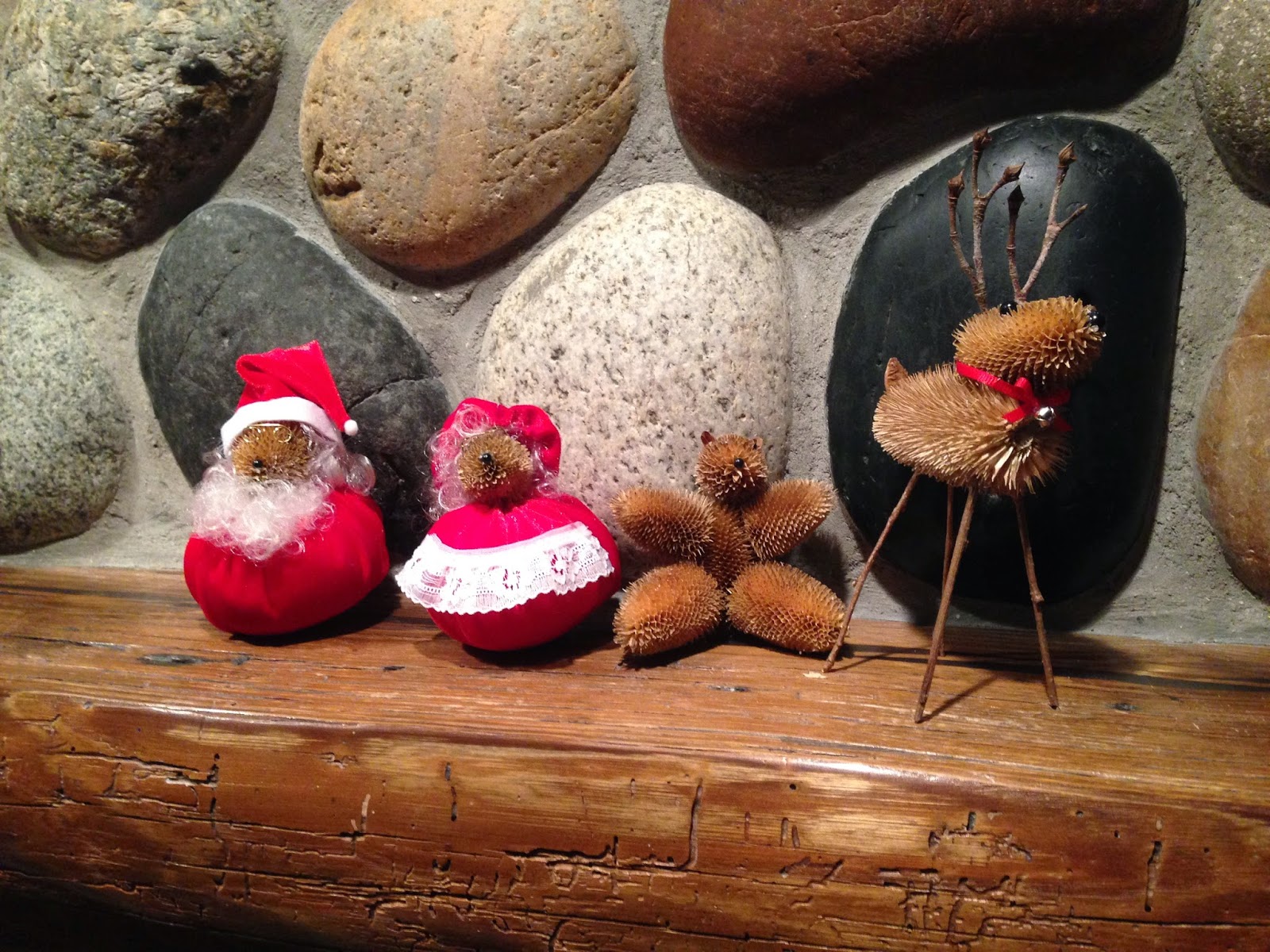 My mom, however, had some crafty ideas.  At right is the little teasel folk “family” she made for us, sitting on our mantle.  She also made another similar family for us to give to a certain somebody.

So far it's the only thing that looks like Christmas in our house.  All our Christmas decorations are buried somewhere in the piles of boxes strewn throughout our house...
Posted by Unknown at (permalink) 6:21 AM No comments:

Progress report...  Yesterday Debbie and I were quite tired (see previous report for the reasons why), so we were lazy and didn't do all that much.  I did manage to get my truck unpacked, along with a bit of Debbie's – but the heavy stuff in her truck is still in there.  I'll get it unloaded today.  I think :)

When I looked outside our house yesterday morning, I could see that the gas had not yet been connected to the barn.  That was bad news, for sure, as the heat was supposed to have been connected this past Monday.  I called my builder, and he told me there was a leak in the gas pipe.  He was coming over to fix it later in the day.  He and I worked on it in the late morning.  The leak – a very slow leak – turned out to be in one of the “stab” fittings between the polyethylene pipe and a riser.  Those fittings are not repairable, so he had to purchase a new one, saw off the old one, then install the new one.  That did the trick, though – the leak is cured.  The plumber, inspector, and gas company are supposed to be here today to hook it up.

While we were gone this week, more of the barn's interior was sheathed.  It's now about 2/3s done.  The four interior doors arrived today.  The barn is getting close to being finished.  Once the heat is all hooked up and plumbed (early next week, I hope), we can keep the inside above freezing and we'll be able to finish it off with ease, even if it's really cold out.

Today I have a 450 lb. “kit” arriving: two stainless steel cat isolation cages.  The shipping company told me that it's got a total of nine boxes to deliver today, with the heaviest ones weighing 125 lbs. each.  Seven of those boxes contain “hardware” – I'm envisioning several gross of bolts, nuts, and washers for me to assemble.  Sigh...
Posted by Unknown at (permalink) 6:11 AM No comments:

Progress report...  Ok, I forgot to post the detailed report of our adventures on Wednesday.  So sue me!  Here it is, a day late...

We got up at 2 am, and Debbie went out to the living room, alone, to capture the cats.  She went alone because four of our eight cats flee from me upon sight; if I had gone out we'd never find them.  She caught one kitty and put it in a carrier – and instantly all the other kitties went into full panic mode.  They hid in obscure places, all of them difficult to extract them from.  They ran.  They hissed.  They even struck out at Debbie.  Oh, my.  It took her an hour and a half to corral the eight of them.  We had figured on about fifteen minutes.  Not a good start.

Right about then it started to pour, with heavy rains of the kind seldom seen in Jamul.  It was 40°F and pouring ice cold rain.  I had to pack the last of the pet gear in the back of my pickup (all in plastic boxes), then put a tarp over it all and tie it down.  Naturally I had trouble getting it all to fit, and we kept finding last minute things to put in.  I stuffed, adjusted, and stuffed some more.  I pushed, shoved, and squeezed.  I kicked and jumped up-and-down on some things.  Finally I got it all in, and got the tarp all arranged.  Then I had to tie the tarp down.  The nylon braid rope soaked up the rain water like a sponge, and then became almost impossible to handle with my near-frozen fingers.  Finally I got it all lashed down, and we got ourselves on the road – but not until 6:30 am, instead of the 3 am we'd been hoping for.

We expected to run into bad rush hour traffic in San Diego, and we did – heading west on the 52, going up and over the big hill before the Santos Road exit.  But that didn't actually take all that long, just 20 minutes or so, and then we mostly broke free of the traffic.  The next time we hit any slowdowns wasn't until we were on the I-215, heading through Riverside.  That eastern edge of the Los Angeles area generally has pretty bad traffic at 8:30 to 9:00 am (when we were going through), but we didn't hit much at all.  We were zooming up the big hill towards Victorville before 10:00 am, and after that we never hit any traffic the rest of the trip.  Yay!

The dogs, as expected, were a complete non-problem.  The three field spaniels were in the rear seat, asleep, for the entire drive.  Within seconds of the wheels rotating, they were down and snoring.  Race (our border collie) was in the front passenger seat.  He did sleep a little bit, but most of the time he spent with his head on the center console, staring at me adoringly, just waiting for me to pay some attention.  When I gave him a pat or a head-scratch, he basks in the attention, then gently licked my hand.  For several hours my right hand was soaked :)

We expected the cats to make Debbie's trip a living hell.  We had eight cats in five carriers (three of them were doubled up with “buddies”).  Each carrier had puppy pads (basically giant disposable diapers) in the bottom and small litter boxes.  We didn't feed the cats for 12 hours prior to leaving, but they had access to water.  As we loaded the carriers into her truck, there was much yowling and complaining, most especially from Jahaur, who sounded like he was positive we were about to skin him alive.  We thought that sort of yowling would go on for the entire trip, as we've experienced on previous trips.  Also, other cats we've traveled with have always done some combination of peeing, pooping, and puking – usually all three at once.  As you might imagine, that leads to some ... unattractive ... odors in the car.  In the pouring rain, opening windows would be a bit problematic (soaking the cats was unlikely to improve their mood).  I felt great sympathy for Debbie, but both of us figured that if I were to drive the cats things would be even worse – my mere existence horrifies four of our cats, and my presence would be even worse.  As things turned out, though, none of these things happened.  The howling and yowling settled down after just 15 minutes or so.  Jahaur was very stressed (panting) for the first couple of hours, but was fine after that.  There was no peeing, pooping, or puking – none at all.  Debbie's trip wasn't quite as pleasant as mine with the dogs, but it wasn't actually unpleasant.  Yay!

We got clear of the rain as we approached the Nevada border, and had good weather the rest of the way up.  We stopped several times to walk the dogs, and on our first stop we had our lunch.  It was rather a special lunch for us.  The day before, Debbie had stopped in at the Bravo Cafe.  There Manoli and his family gave Debbie an emotional good-bye – we've known them now for over fifteen years, watched some of their kids grow up and work in the cafe.  We've eaten a great many fine meals there over the years.  Yesterday Debbie got a “sandwich kit” for chicken salad sandwiches.  Manoli's chicken salad sandwiches have to be seen to be believed.  He makes the salad fresh for each sandwich, chopping roast chicken, tomatoes, onions, and more.  The bread he uses is made in abnormally large loaves – so when he slices it, the resulting sandwich fills a normal sized dinner plate.  He serves them up with a couple dill pickle strips.  Unless you've starved yourself for, say, three days, then there's no way you can eat the whole thing.  I got through about three quarters of mine, Debbie about the same.  The dogs each got some chicken salad, and the crows and sparrows got the leftover bread.  I'm going to miss the Bravo Cafe, and especially Manoli and Rosio and the rest of the gang...

We stopped in St. George at the Freddy's there, and got a small chocolate malted shake.  Yum!  We walked the dogs a couple more times, stopped for gas in Cedar City and Farmington, but otherwise we just drove.  We rolled into our Paradise driveway just after 10 pm.  With the time zone change, that works out to fourteen and a half hours of travel – not a bad time at all!

Then we set up all the dog and cat stuff in the house.  There's a lot of stuff to set up :)  Litter boxes, dog beds, and lots of little details.  Then we hauled all the cats inside, still in their carriers, and getting mighty worried.  Cats really, really don't like new things.  When we finally got them all in the cattery (except for Jahaur, who was in our bedroom), we opened their carrier doors.  None of them budged – at that point their carriers looked like home compared with the scary new cattery.  We “encouraged” them to get out, and within a half hour or so they were finally exploring a bit.  We let Jahaur out in our bedroom, and he reacted about the same way.  By the time we went to bed at about 1 am, though, he was making himself at home.  The dogs, of course, couldn't care less that they were in a new house.  So long as we were there, they were happy.

It was a long, long day.  We finally got to sleep, but then we were awakened by the phone ringing at 6 am.  There aren't many people stirring in Paradise at that hour, so we were very surprised to be getting a call.  It turned out to be our neighbor Tim D., calling to find out if we were ok.  He was worried because when he looked south toward our house, he saw the flashing lights of emergency vehicles all over the place – several ambulances, police cars, and fire trucks.  We knew nothing of this; we'd slept through all the sirens and commotion.  Later, after daylight, I walked down to the scene of the accident, roughly 200 yards south of our driveway.  There were skid marks, ruts on the side of the road (on our property), and some small car parts, shattered glass, and tail light fragments.  We don't know anything at all about what happened or who was involved...
Posted by Unknown at (permalink) 5:00 AM No comments: