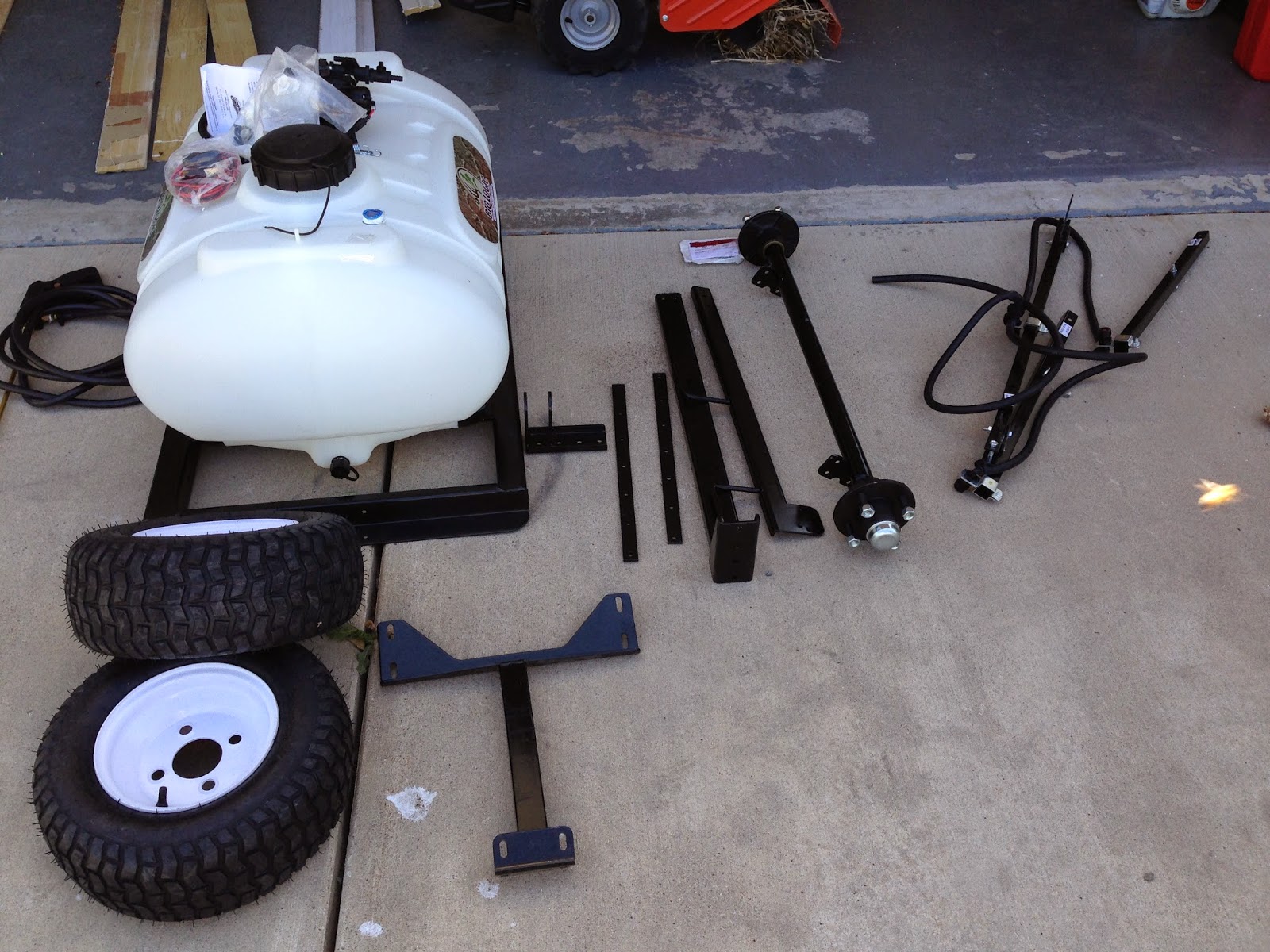 Sprayer...  Well, I just received the “tow-behind” lawn & garden sprayer I'd ordered – and it was basically a big box of parts (see photo at right).  I almost decided to refuse delivery, as the box was completely beat up, held together with about 20 rolls of tape, and all the (heavy steel) parts were just banging around loose inside.  But the UPS guy patiently waited while I opened the box, inventoried the contents, and decided that everything was there and unbroken – so I accepted it.  Right after he pulled out of the driveway, I discovered that there was something missing – the assembly directions! 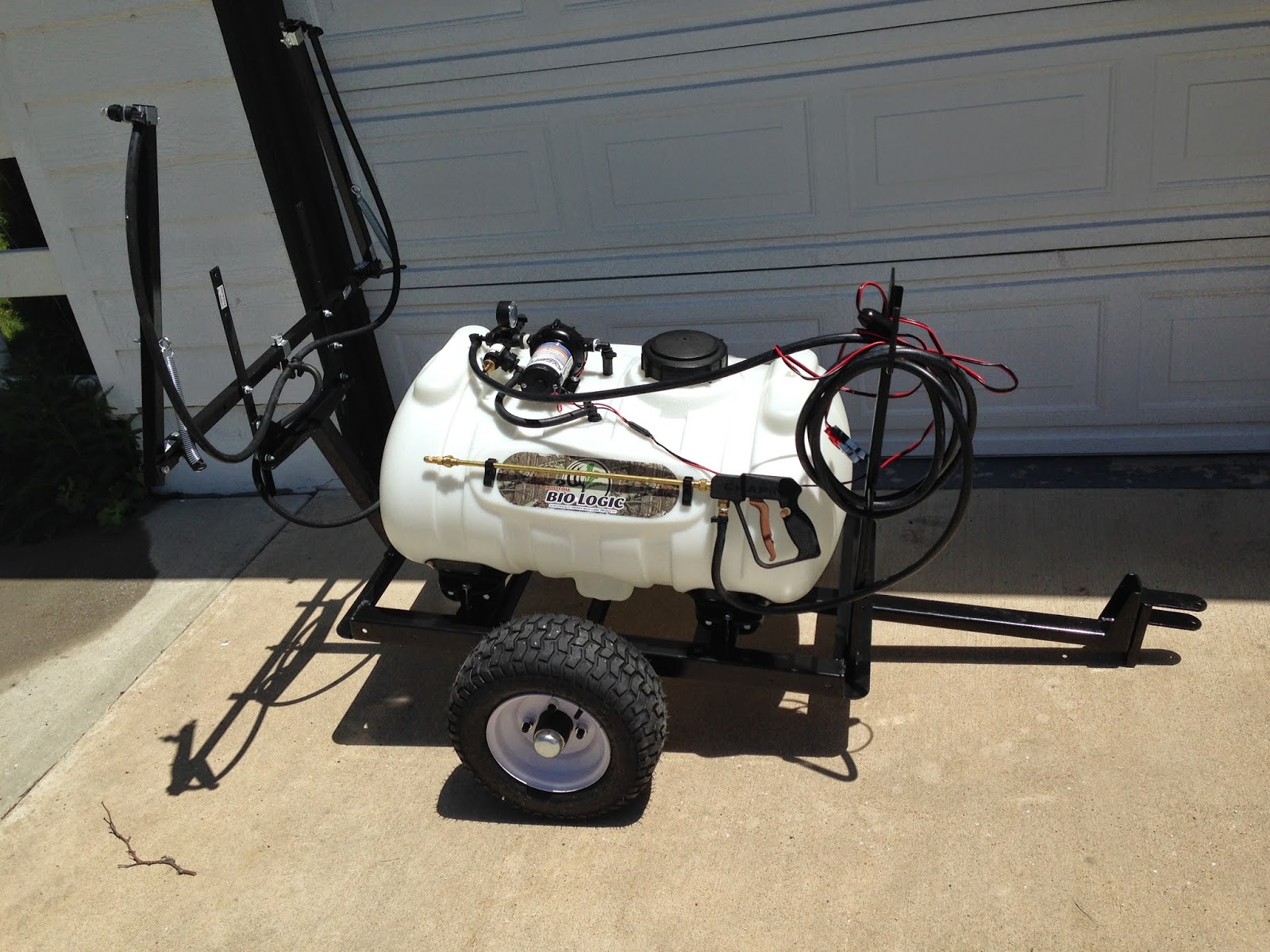 What followed was something Debbie would have gotten a kick out of: it took me several trial assemblies and disassemblies before I finally figured out how the thing was supposed to go together.  At least I think I figured it out!  :)  At left is the finished sprayer.  I haven't had a chance to try it yet, as my mower has a flat tire that I'll be fixing later this afternoon, if the air compressor I ordered actually shows up...
Posted by Unknown at (permalink) 1:50 PM No comments:

Spring repair...  The “development” for the spring that supplies our home in Paradise with drinking water was in desperate need of repair.  The old development (no “before” photos, sorry) was broken up by erosion under its apron, and it had a not-very-lovely concentration camp style chain link topped by barbed wire fence around it.  The workers started fixing it up on Friday, and they've already made a lot of progress.  All the broken up older structure has been removed, they dug deep around it and backfilled with 1/2" rock, and now they're getting ready to pour a new apron.  Devon (the older fellow) and Coulten are doing a bang-up job.  Some photos, taken just a few minutes ago: 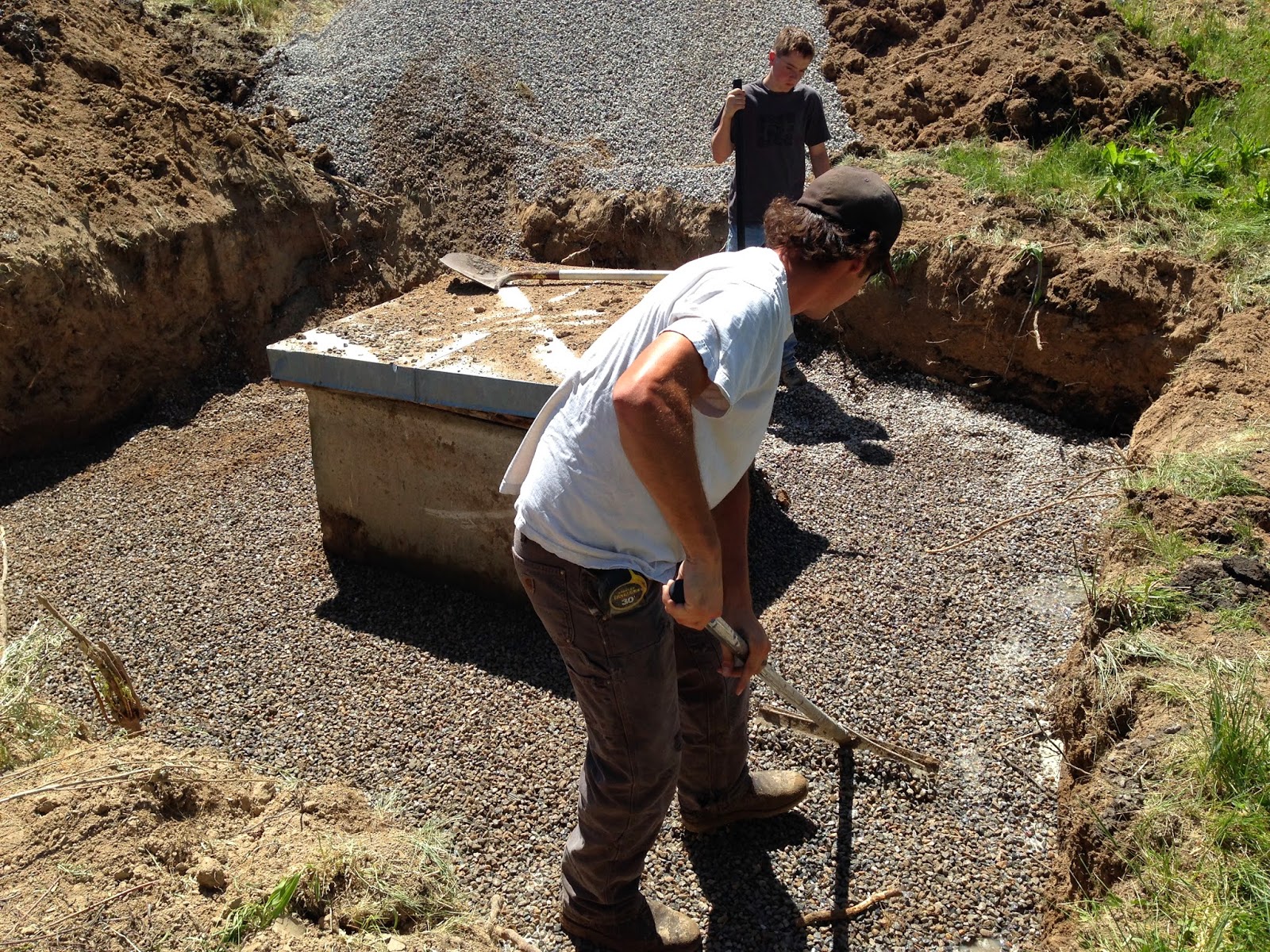 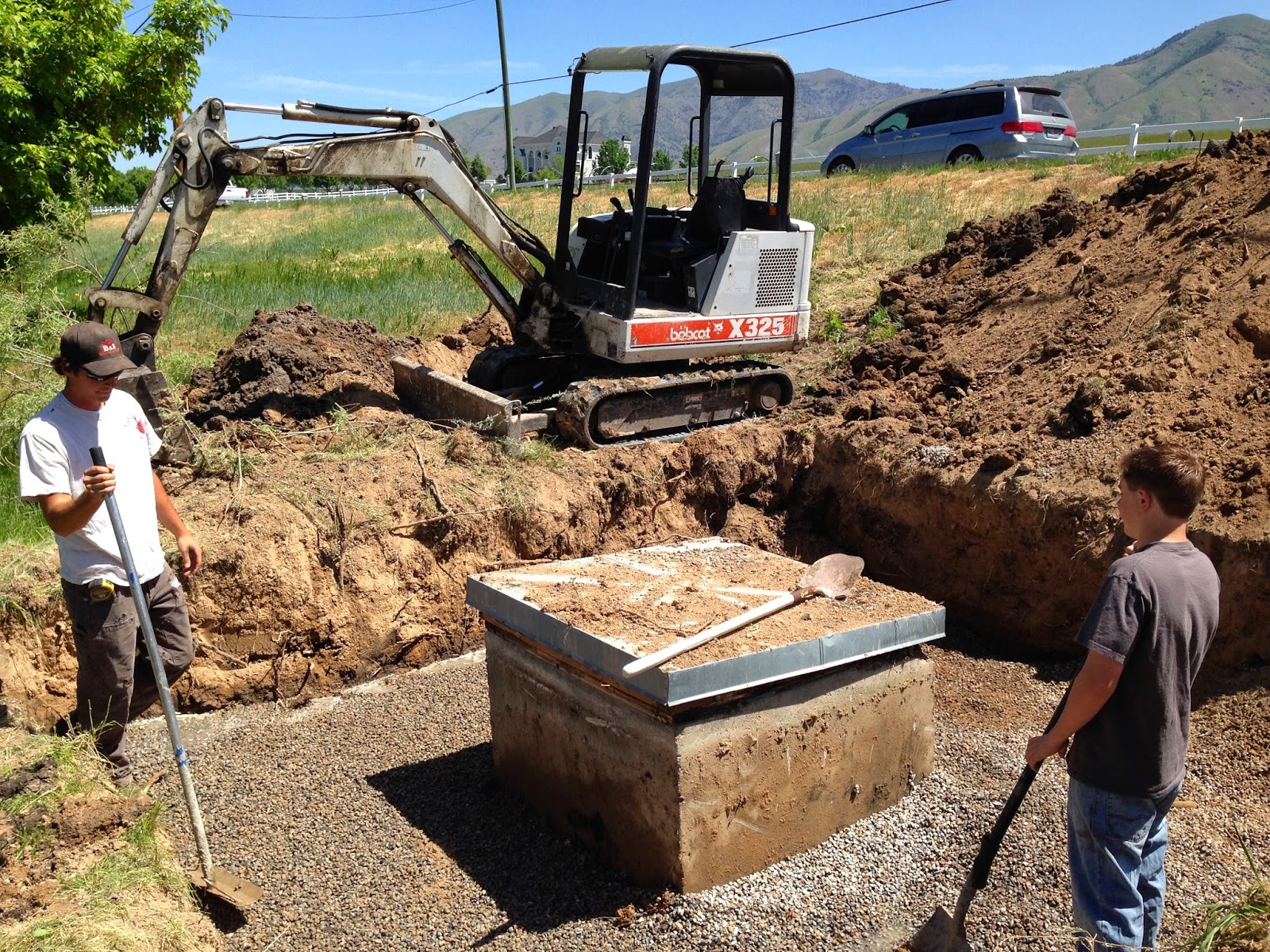 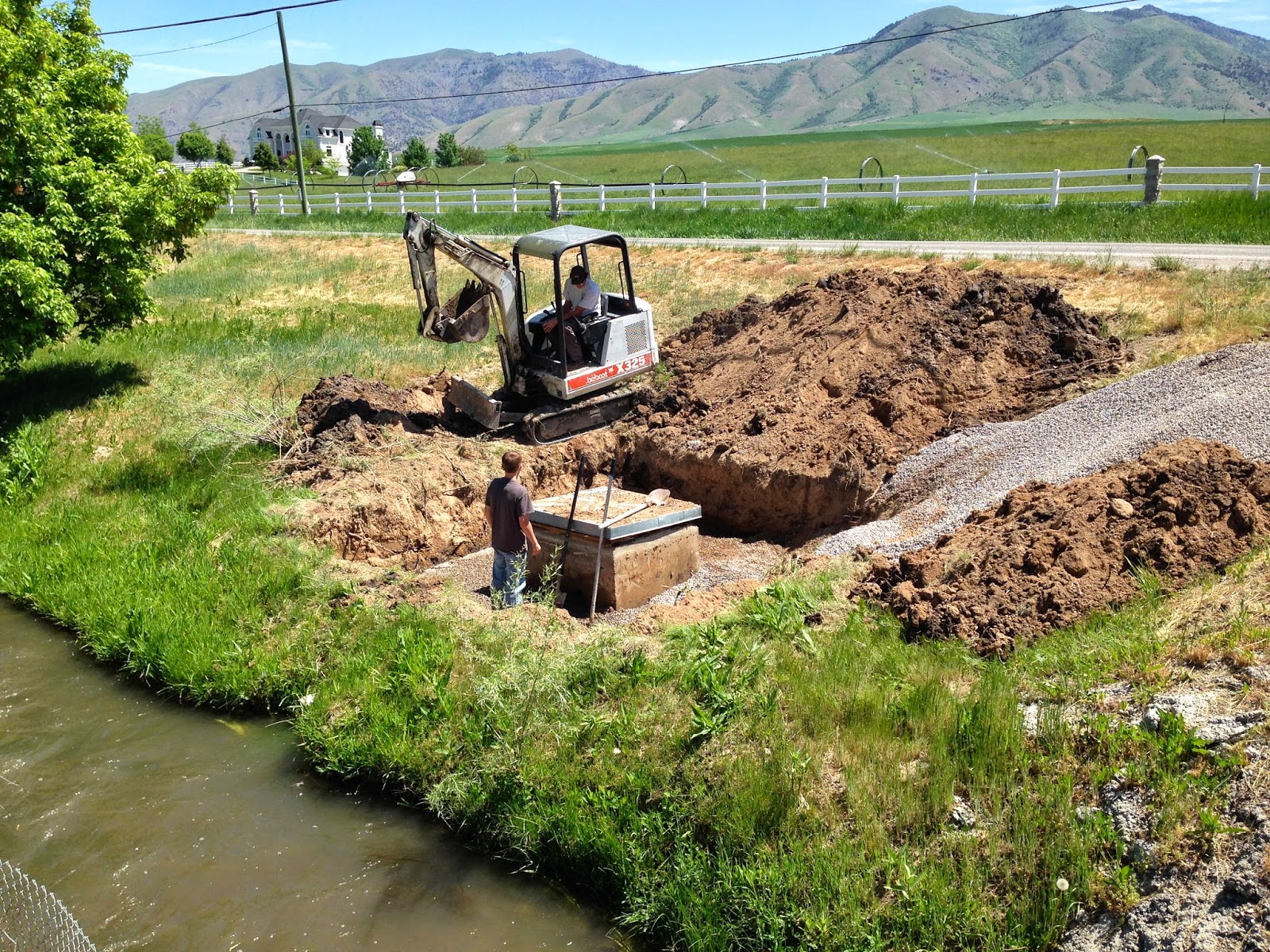 Posted by Unknown at (permalink) 11:12 AM No comments:

Positional distribution of letters in English usage...  It's amazing how many different ways there are to analyze data.  I've done rather a lot of analysis of English writing, mostly in the '90s when I got interested in identifying an author by their writing style.  I also did some, just for fun, when working on decryption (for some kinds of cyphers, knowing letter frequencies, letter pair frequencies, etc. can be very useful).  This is one kind of analysis I'd never thought of!

For any given letter, how often does it appear in various positions within words (at the beginning, somewhere in the middle, or at the end)?  The distribution for the letter “z” is shown at right.  This is one of the letters that surprised me – I wouldn't have guessed that it appeared more often in the middle of a word than anywhere else.

The first thought I had upon seeing these graphs was this: it's very useful information for a Scrabble player!
Posted by Unknown at (permalink) 5:16 AM No comments:

Several readers wrote ... to ask what I thought of the exchange of five Taliban prisoners at Gitmo for Sergeant Bowe Bergdahl.  This morning's Wall Street Journal editorial almost perfectly captures my thoughts.  Bottom line: it's wonderful that our soldier is coming home, and there's nothing intrinsically wrong with a prisoner exchange (something we've done many times before).  The real problem is Obama's wimpy foreign policy, which at this point must have convinced even the stupidest adversary that we're not serious about defending either ourselves or our allies.

I'll make two additional points:
My readers know that I am no supporter of Obama or his policies.  Even knaves and fools sometimes get something right, though ... and this is one time when I think Obama did.