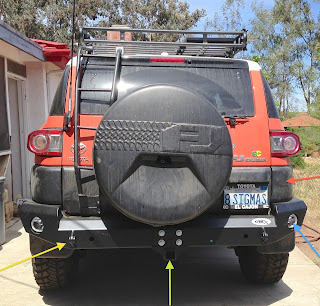 Here's the promised photo of the completed rear bumper.  Debbie found an awesome hitch receiver cover that hasn't arrived yet (a milled copy of the “Don't Tread On Me” flag) which will provide the finishing touch.

The orange arrow points out the rear quarter panel plastic that I worked so hard to preserve (much hand sawing was involved with this!).

The blue arrow points out the backup lights.  I've physically installed them, but have not yet wired them up (that's a job for tomorrow).  These are 55 watt halogen bulbs that are used as the headlights in many cars – should light up the world behind me quite nicely when I'm backing this thing up!

The green arrow points out the hitch receiver (2" Class IV).

The yellow arrow points out the D-ring hard points.  These are on both the front and rear of the vehicle, and provide a very convenient attachment point for winch lines (if someone else is pulling us out of trouble).  All of these can hold the entire vehicle weight.  With these plus the rock rails, we've now got great attachment points all the way around the vehicle.  In addition, both the bumpers and the rock rails make fine places for the hi-lift jack to get under.

I'm headed up to All-Pro (in Perris, California) on Monday to get their help with the transfer case/exhaust skid plate.  They don't know any reason why it won't fit other than some design change to the 2013 FJ model.  I'm the very first customer of theirs to attempt fitting all this stuff to a 2013, so I'm the one running into the fitment issues.  There have only been a couple issues so far, and in both cases the fine folks at All-Pro have committed to me that they would make it right.  For instance, in the current case of the transfer case/exhaust skid plate – they've told me that if they can't make the standard one fit, they'll make one for me that does fit.  Can't really ask for more than that!
Posted by Unknown at (permalink) 11:11 AM No comments:

I Shouldn't Be Surprised...

California's current political context, with Democratic super-majorities in both Houses and a leftist, progressive (Democratic, of course) governor, means that it's possible for California to advance outrageously crazy bills and get them signed by the governor.  For some reason, I keep getting surprised when they do so.

Here's another one in the works – it hasn't passed yet, but the oracles are predicting that it will.

The problem his new bill is addressing is one of those features of ObamaCare with supposedly unforeseen consequences – that were actually completely foreseen by many critics: the “employer mandate” that requires any employer of more than 50 full-time workers.  Many employers in the service sector (restaurants, movie theaters, hotels, etc.) will simply move as many employees as possible from full time to part time.  If you're running a business, this is an obvious tactic to avoid the (large) additional expenses of ObamaCare.  Of course they're going to move those workers to part time – and they should, in order to keep their prices low and competitive.  Any business that didn't would instantly become less efficient and less competitive than it should be.

So imagine you're a California legislator.  What do you do in the face of this?  Well, of course what you do is outlaw moving workers to part time!  Make it illegal for a business to run efficiently, or to compete effectively – yeah, that's the ticket!

The drums of doom beat ever closer.  Especially in California...
Posted by Unknown at (permalink) 8:38 AM 1 comment: