Panoramic view of Paradise...  I went to the same hill we walked to this morning and took a 180° panoramic photo.  The center of the photo is west from where I was standing – so the left edge is south and the right edge is north.  Our home is about a half mile in front of where I stood to take this photo, right where the dirt road disappears into the greenery...

Posted by Unknown at (permalink) 12:01 PM No comments:

Leftover bowl...  Not a bowl for leftovers, but rather a bowl made from leftovers :)

I found myself with a leftover piece round of walnut, 1 1/4 inches thick and 6 inches in diameter (this was from a cutout I made in the kitty bowl holder I'm making for Debbie).  It seemed a shame to throw such a pretty piece of wood away, so I chucked it up into the lathe and turned it into a bowl.  After that, a few minutes of sanding and a good soaking in Watco produced a decent little bowl!  I could imagine this filled with candy or other small food items, jewelry, or other small things.  The thickness was made from two boards glued together, and I wasn't at all sure how well that would turn on the lathe.  It worked just fine, and the results look nice too!
Posted by Unknown at (permalink) 11:54 AM No comments:

My pistol-packing mama ... just picked herself a Mother's Day bouquet.  Beautiful, isn't it?  Just like my mom :) 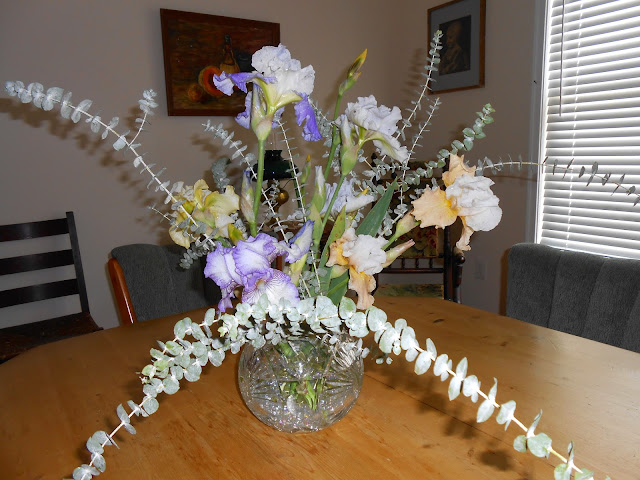 Morning in Paradise...  I just got back from a delightful walk of a mile or so with the three dogs.  There was a pause in the rain, and I took advantage of it to walk up a dirt road that inclines gently uphill to the east of our home.  I've been walking it twice daily this week.  I started out on these walks mainly to get Mo'i (our old fellow) some much-needed exercise, but they've been so interesting I now have another motivation.  It's beautiful here right now, with the spring bringing green velvet to the hills around us.  On the walk away from the house, I'm looking at the Wasatch Mountains to our east, and the fields of hay on the rising foothills.  On the way back, I'm looking at the Little Bear River valley spread out before me, and the foothills of the Wellsville Mountains a few miles away.  That walk back is just plain gorgeous right now.

This morning we had what a photographer would call “perfect diffuse lighting”.  The low clouds, hugging the mountains all around us, completely hid the sun – but there was still plenty of light, but no shadows at all, as the light was coming from every direction.  This sort of diffuse lighting makes the green vegetation “pop” in a way that bright direct sunlight cannot.  I stopped many times on the way back just to revel in the scene.

The dogs had another sort of experience altogether.  If you've ever walked after a rain in the countryside, you know that the rain brings earthworms to the surface.  Here we have some fairly large earthworms (they seem to average about 8 or 9 inches long, with some well over a foot), and in very large quantity.  Apparently our local soils are much to their liking.  Well, the gravel road we were walking on had hundreds of earthworms on it, all crawling along in their slow fashion.  I noticed them immediately, and walked carefully to avoid them – and that wasn't always easy to do.  The dogs, however, didn't notice them at first.

Then about halfway on the walk away from the house, Race (our border collie) caught sight of one that moved faster than usual.  He flashed over to it and started sniffing it, and the worm first contracted lengthwise, then started curling up.  That got Race's attention!  Next he took a nibble, and decided it was good.  The worm disappeared down Race's gullet.  From that point on in our walk, Race turned into a worm collie.  I tried at first to keep him from eating them, but it was hopeless – he's just too darned fast.  Miki (our younger field spaniel) saw all this activity and went over to smell an earthworm.  When it curled up on him, he jumped back and barked at it.  I'd give anything to have that on video :)  He wouldn't go near them again.  Mo'i took one sniff, looked at Race as if to ask “WTF is wrong with you, dog?” and kept plodding along.

There are a pair of horses pastured along the road we walk on, and they're both quite curious about the dogs and I.  One of them is braver than the other, and will put its head over the fence for a nuzzle, and is curious about the dogs.  The other hasn't come closer than a few feet, but is watching us carefully.  Mo'i has met horses before, and in his usual friendly way is quite comfortable around them.  Miki and Race, on the other hand, act as if they can't believe Mo'i and I are brave enough to approach the horses :)  Race wants to bark at them, and (I suspect) to herd them.  I have to constantly tell him to stand down while we're near the horses.  Miki, the wuss, just pulls back to the end of the leash as far away from the horses as he can possibly get.  Every once in a while he'll edge closer – but if the horses so much as blink their eyes, he's bouncing off the leash behind me :)

Lovely morning, it is.  In Paradise...
Posted by Unknown at (permalink) 7:18 AM No comments:

I'm not a Carly Fiorina fan...

I'm not a Carly Fiorina fan...  She and I have far too many issues that we disagree on, and I'm not at all convinced she's a competent leader.  But ... I love the poise and cleverness demonstrated here.  It's a skill that's vital for a viable candidate these days, and one that can only weakly be handled by staff.  If I had a candidate that I really liked, I'd wish for them to have these skills...
Posted by Unknown at (permalink) 5:43 AM No comments:

Lots of lovely, lovely rain last night...  Our storm total is now up to 0.87" – considerably more than predicted.  This will give our hay fields a big boost, and with any luck at all will help fill the reservoir, too...
Posted by Unknown at (permalink) 5:30 AM No comments:

For me, this is like reading about aliens...  I've always liked being alone, doing things alone.  I've never thought of that preference as antisocial or weird – it's just the way I am.  I have a few close friends (including my lovely bride!) whom I do like sharing experiences with, but in general my default is to do things on my own.  This was a source of friction in my career, as darned near everything I ever did as an employee was as part of a team.  The few exceptions stand out in my mind for the pleasure they brought me...
Posted by Unknown at (permalink) 5:29 AM No comments:

Poronkusema...  Finnish for the distance that a reindeer can travel comfortably without stopping.  More handy foreign words for which there is no English equivalent...
Posted by Unknown at (permalink) 4:55 AM No comments: