Tunny Machine Back in Action!

If you're a technology history junkie like me, you probably know about the Tunny machines.  They were an important part of the Bletchly Park efforts that decoded Nazi messages.

The British National Museum of Computing has recently finished building a complete, working replica of a Tunny machine.  In the course of doing so, they've now documented exactly how it was built (this documentation didn't exist before they started their work).

This is something I would really like to see.  Next time I'm over in England, I've got to make a point of seeing this museum (I've never been there)...
Posted by Unknown at (permalink) 4:55 AM No comments: 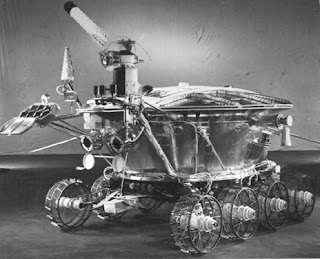 This Soviet achievement in 1969 was completely overshadowed by the American achievement of putting astronauts on the moon.  The Soviet moon rover was, however, quite a technical feat in its own right.

Clearly, though, the Soviets needed a dose of design talent.  Lunokhod's “washtub look” would have made Stalin quite happy.

While Lunokhod's electronics failed a long time ago, the device itself was recently located by imagery satellites in lunar orbit, and a scientist has now succeeded in bouncing light off the retro-reflectors mounted on Lunokhod's back.  With its location now precisely known, Lunokhod's retro-reflectors have now become an important part of a modern science effort.  Not bad for a 42 year old piece of space junk!
Posted by Unknown at (permalink) 4:49 AM 1 comment:

If you're a developer, this is very funny stuff: how to write unmaintainable code.  A sample:


Recycle Your Variables Wherever scope rules permit, reuse existing unrelated variable names. Similarly, use the same temporary variable for two unrelated purposes (purporting to save stack slots). For a fiendish variant, morph the variable, for example, assign a value to a variable at the top of a very long method, and then somewhere in the middle, change the meaning of the variable in a subtle way, such as converting it from a 0-based coordinate to a 1-based coordinate. Be certain not to document this change in meaning.

Posted by Unknown at (permalink) 4:42 AM No comments: