Is a New Ice Age on the Way?

The news of some scientists predicting the possibility of a new “little Ice Age” broke a few days ago.  I didn't post anything right away, as I wanted to read up on both the original story and reactions to it.  Here's my summary, after reading a lot of articles:
Debbie and I own property in Southern California and in Northern Idaho.  If we really did enter a new little Ice Age, I wonder what that would do to property values?  Idaho surely would become less attractive.  Southern California I'm not so sure about – it probably depends to a large extent about what reduced temperatures would do to rainfall...
Posted by Unknown at (permalink) 4:59 AM 1 comment:

Life Expectancy in the U.S...

The Institute for Health Metrics and Evaluation (IHME) has a fascinating interactive map that shows the changes in life expectancy over time.  At right I took a screenshot of the most recent data (green is good, red is bad).  I'm fascinated by how much regional difference there is even in a country as homogenous as the U.S.

If you visit their map page, play with the sliders at the bottom to select the period of time you're interested in...
Posted by Unknown at (permalink) 4:49 AM No comments: 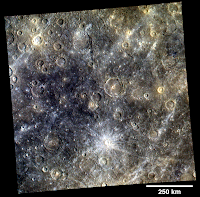 MESSENGER has now spent more than one Mercury year (88 Earth days) in orbit, doing solid science.  Recently it made an adjustment to its orbit, bringing its closest approach to just 200 km high.  Some recent imagery is at right (click to enlarge), in false color, via APOD.  By all reports, MESSENGER is doing exactly what its science team had hoped it would do, and all of its systems are (in NASA-speak) “nominal”.

Long-time readers would be disappointed if I didn't include here my usual rant about the effectiveness (and glory!) of unmanned space exploration, as compared to the utter waste and uselessness of the current and proposed manned space program...
Posted by Unknown at (permalink) 4:43 AM No comments:

Libyan Rebels and Their Weapons...

The Libyan rebels aren't (at least to my knowledge) being supplied by anyone with a regular supply of weaponry and ammunition.  They're up against a relatively well-equipped regular Libyan Army and Air Force.  What do you do in such a situation?  You improvise, and improvise they have – like the homemade armored car at right...
Posted by Unknown at (permalink) 4:37 AM 1 comment:

A very nice time-lapse video showing (in particular) how much the moon “wobbles” due to our changing perspective of it:

One of the best collections of facts about introverts I've seen, all in clear layman's terms.  This resonates very strongly with me, each and every point...
Posted by Unknown at (permalink) 4:27 AM No comments: