How government is destroying small business...

How government is destroying small business...  Warren Meyer (of CoyoteBlog, and a small business owner himself) has an outstanding discussion.  Every politician should be forced to read this, and tested on his or her understanding – and the results made public...
Posted by Unknown at (permalink) 12:27 PM No comments:

The trip home...  I flew from Richmond, Virginia to Salt Lake City (connecting through Houston) on Wednesday.  The flight was almost uneventful.  The exception was that on the last leg, about a half hour out of Houston, I ordered a soda to drink.  The flight attendant handed me the soda, I set it on my tray table, and the guy in front of me chose that moment to violently lean his seat back.  The soda went flying, and upended all over my lap.  Soaked, I was, and in a most uncomfortable way.  Then the jerk decided to get all angry about it, saying it was my fault for being so stupid as to put my soda on the tray table.  The flight attendant just rolled her eyes, and I let it go – my experience with the stupid, which is far broader than I wish it was, suggests that pushing back against stupid that burns that hard is completely useless.

Upon arriving in Salt Lake City, I called Debbie (who was waiting in the cell phone lot) to come pick me up.  Mere seconds later, she rolled up – with Miki and Race in the back seat.  After a hug and a kiss and some happy dogs, we drove back home to a lovely shower and an even lovelier big, comfortable bed.  It's always so good to get home, even after a wonderful trip like the one I just took, with a week to see my immediate family and their spouses.

I took the photos below as we approached Salt Lake City, crossing the Wasatch mountains.  As always, click to embiggen... 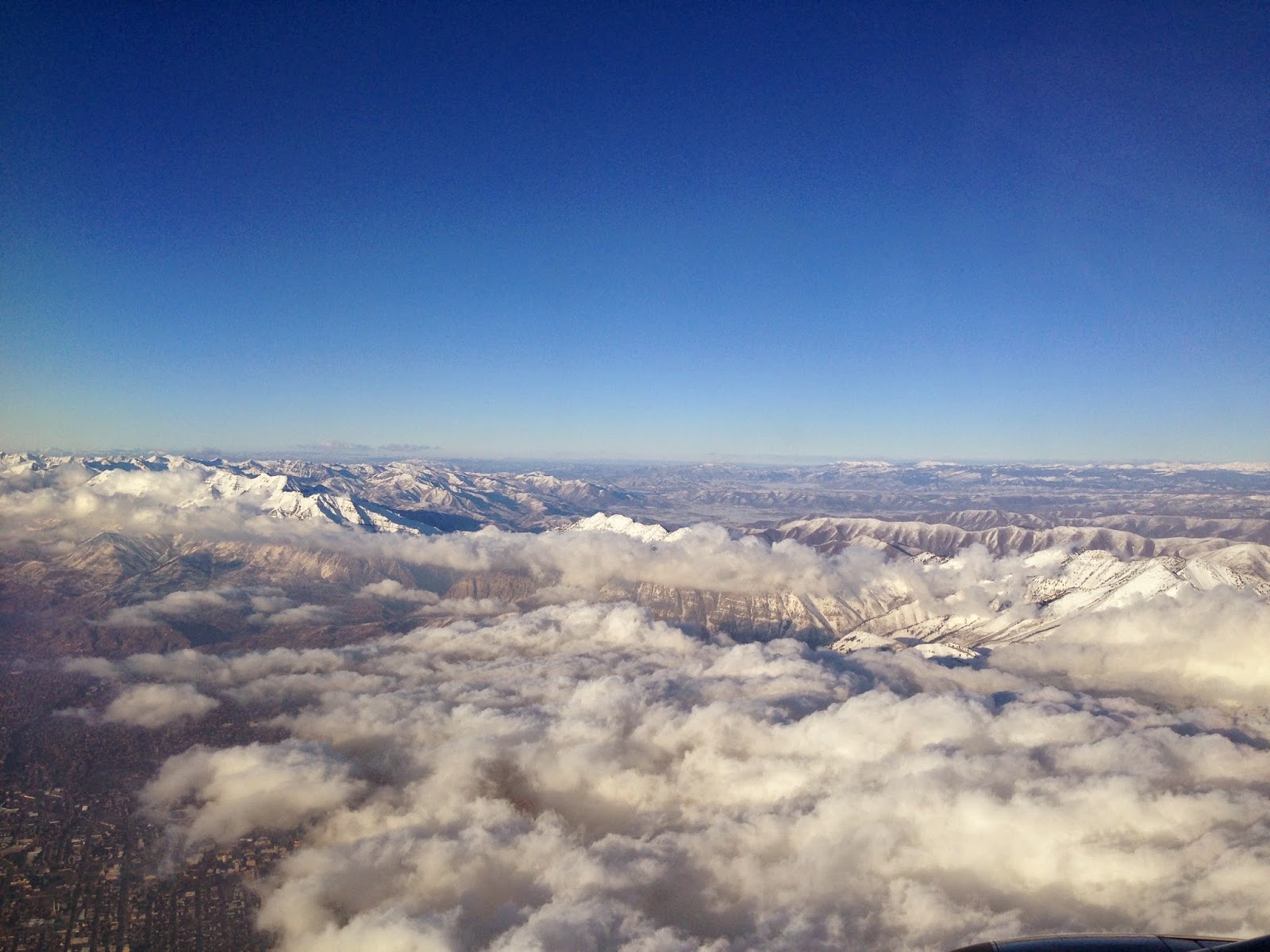 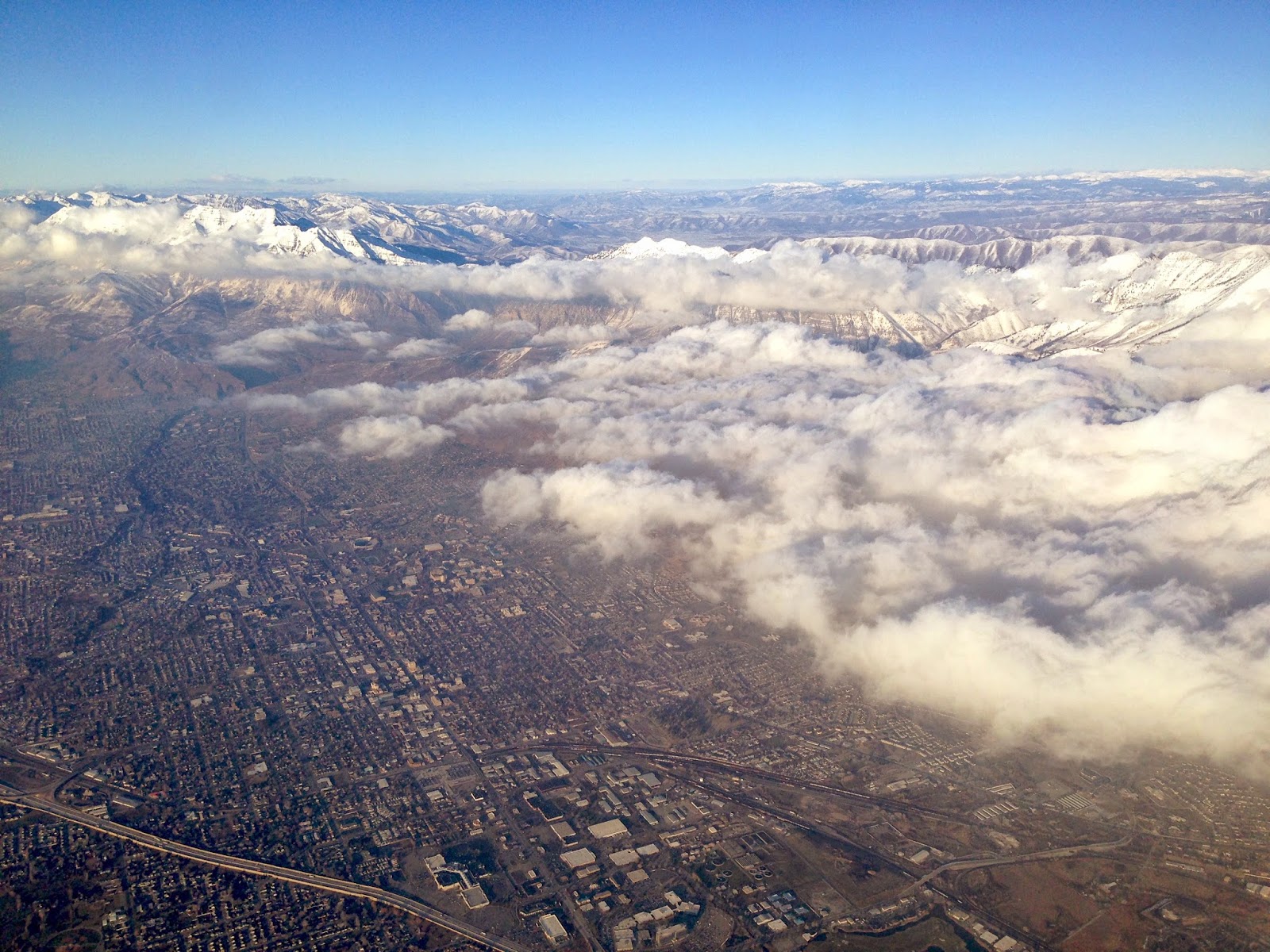 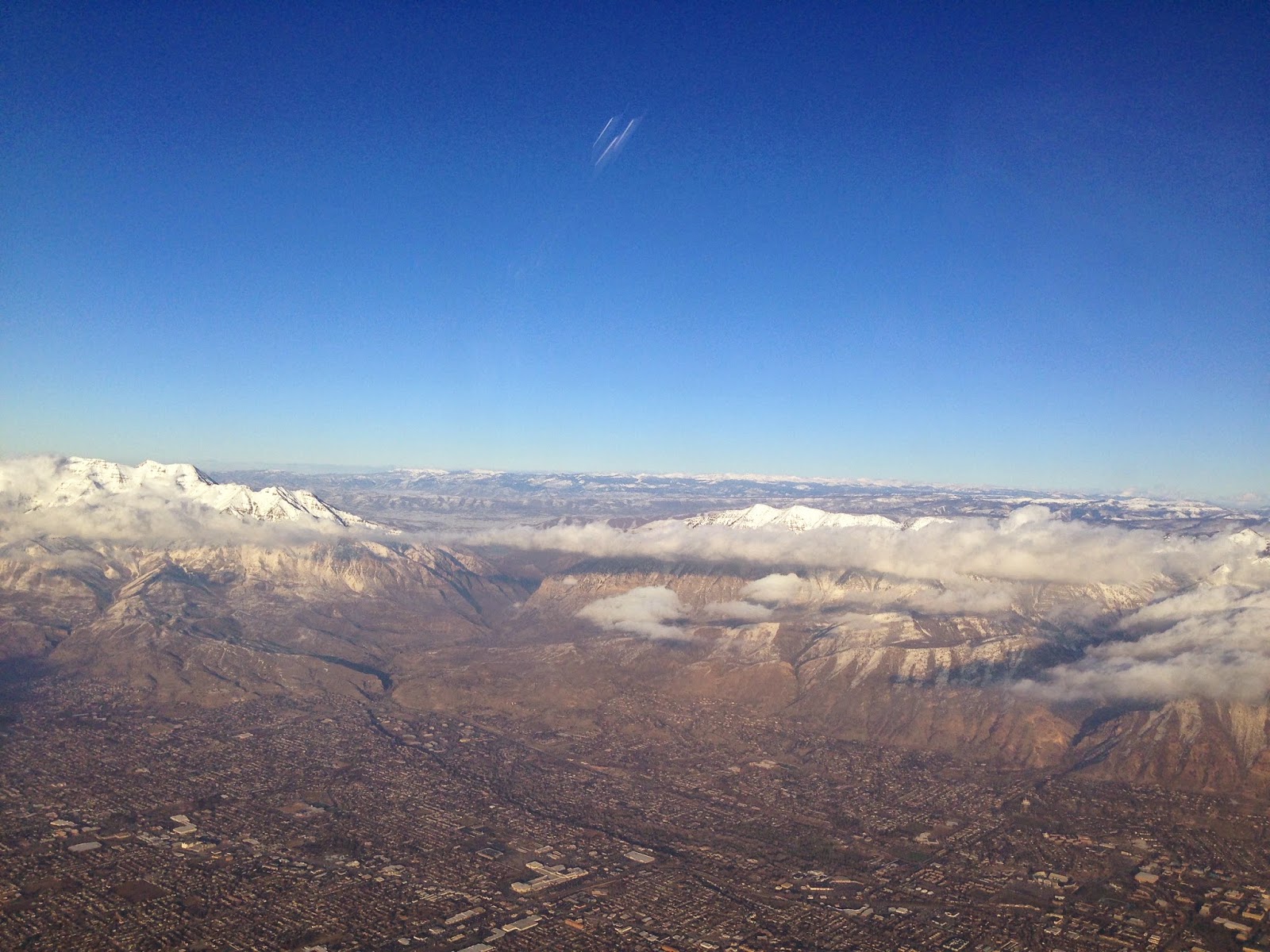 The Daily Shot...  If you're one of the three people who regularly read my blog, then you already know that I'm a fan of the Ricochet web site – despite the fact that its unabashedly conservative perspective is in considerable conflict with my own beliefs.  It's chock full of interesting and entertaining writers, and (even better) a lively set of commenters who are remarkably civil.  The site charges a small annual fee for anyone who wants to comment (or have full access), which means that they know who the commenters are.  That small little bit of information is enough to let them control the flamers and trolls – and provide a lovely little island of civility of an otherwise verbally violent Internet.  I cherish that!

The same web site publishes a free daily email called “The Daily Shot.”  It's a little cheeky, full of information, and a good deal of fun to read.  I've been reading it for a while now, and I still look forward to its arrival in my inbox every morning.  Here's their own description:


The Ricochet Daily Shot is a quick, smart, fun way to catch up on today's big events -- and get a preview of what's coming up tomorrow. It's meant to be a fast snapshot of the news from a decidedly Ricochet perspective, packed with enough information to tide you over until you have a chance to sit down with your favorite non-left wing news outlet, assuming you've found such a thing.

The Daily Shot gives you just the right amount of news, wit, and information to make it through the day, and to dazzle and dumbfound the liberals in your wake.

You can subscribe to it here.  Recommended...
Posted by Unknown at (permalink) 5:14 AM No comments:

The Rosetta web site ... just dumped a bunch of beautiful images of Comet 67P, including the one at right.  Go take a look!
Posted by Unknown at (permalink) 5:03 AM No comments:

An upside-down iceberg...  The iceberg shown at right recently flipped over, revealing the ice without debris or sublimation...
Posted by Unknown at (permalink) 5:01 AM No comments:

4,018 days (11 years!) into its 90-day mission ... the Opportunity rover on Mars celebrates with a hilltop panorama.  What an amazing success that little robot (along with its now-dead sibling, Spirit) has been, so far lasting more than 44 times its design lifetime!
Posted by Unknown at (permalink) 4:59 AM No comments:

Learning sequence inversion...  I just read an article about one fellow's experience in learning about how computers work with ones and zeroes.  This guy first learned how to program in some high-level language, and then took it upon himself to learn assembly and machine language.  For him, the experience was revelatory – he clearly hadn't really understood how computers worked before that (and actually, he probably still doesn't understand how the hardware works).

It struck me, as I read, that this is precisely inverted from my own learning experience.  The first thing I learned was how the computer hardware worked. Then I learned how the ones and zeroes stored in RAM controlled that hardware – machine language.  Then I learned how assembly language made it easier for people to read and create machine language programs (by using an assembler).  Much, much later I learned about higher level languages (BASIC, FORTRAN, CMS-2, PL/1, and COBOL, specifically).

I learned machine language with the aid of a “repertoire card” (or “rep card” for short) – a one-page summary of all the machine language instructions the computer was capable of.  The rep card that I owned was a single letter-sized piece of light cardboard, laminated, with printing on the front and back.  It listed all the machine-language instructions, with the binary encoding, execution time (in clock cycles), and affected registers and flags.  I'd love to have a copy of that thing, for old times sake, but I haven't been able to find one.  The Computer History Museum appears to have one.  This web page has a piece of a similar one, shown at right.  That single sheet of cardboard was the only programming documentation I had for several years as I started to program.

This “bottoms-up” approach to learning how to program makes great sense to me, most likely because that's how I learned it :)  For me, high level languages are still the fuzziest part of my knowledge, and I'm still learning more about them all the time.  This isn't entirely because of the bottoms-up approach, of course – that area is changing rapidly, and even the top-down learners have to devote considerable effort to that if they want to keep up.  But many (most, actually) programmers who learned top-down never learn assembly language, or machine language – a fact that I still have trouble wrapping my brain around...
Posted by Unknown at (permalink) 4:55 AM No comments:

Computers keep getting smaller...  The first truly general-purpose computer that I owned was one I built in about 1976, almost forty years ago.  It was a 4 MHz Z80 with a whopping 64kb of RAM and a dual 8" voice-coil floppy disk.  Woo hoo!  That thing weighed about 100 lbs (mainly because of the linear power supply's giant transformer), and was the size of an under-counter mini refrigerator.  It had a 64 x 16 character CRT and a clicky keyboard.  Over the years since then, my main working computer has gradually shrunk, until now I have a Mac Powerbook Pro, with an absurdly fast CPU, gobs of RAM, and a giant SSD – all in a package the size of a skinny notebook.  As I type this, I'm using an add-on clicky keyboard (das keyboard) and a wireless mouse.

Where do computers go from here?  What do they look like when they get smaller?

Above right you see one group's vision: the computer shrinks to fit into the mouse.  Video is transmitted wirelessly to a monitor.  Everything else is in the mouse.  Now I'm not at all sure these folks have a winner of an idea, but it certainly is illustrative of the possibilities as compute hardware keeps shrinking.  I often marvel at the compute power I hold in my hand when using my iPhone; this really isn't much different than that.  It will be interesting to see the computer form ideas popping forth over the next few years...
Posted by Unknown at (permalink) 4:31 AM No comments: