Progress in Paradise...  Did you ever have one of those projects that you thought was going to be a trivial thing turn into the project from hell?  That happened to me today.  The project?  Installing drip irrigation for the five pots of color that we have on our second floor balcony.  What inspired me to do this was discovering a spigot immediately below the balcony.  No particular part of this project was hard – the only real problem was that I kept forgetting one part or another for the system.  Since this was the first drip irrigation I've installed at our home in Paradise, I didn't have the box of all the miscellaneous parts and tools you need for this job.  There's the filter, the faucet adapter, the pressure reducer, the back-flow preventer, the timer, the 1/2" tubing, the 1/4" tubing, the barbed flow emitters, the bug stoppers, the stakes, the emitter installation tool, and 25 or so other things.  I made a lot of trips to Ridley's.  Had to fill up on gas.  I'm thinking about new tires.  And I definitely am now overdue for maintenance on my truck.  My wallet is overstuffed with Ridley's receipts, most of them for under $5.  Sheesh.

Well, now I have that box of miscellaneous drip irrigation parts and tools!

And the drip irrigation is working fine. 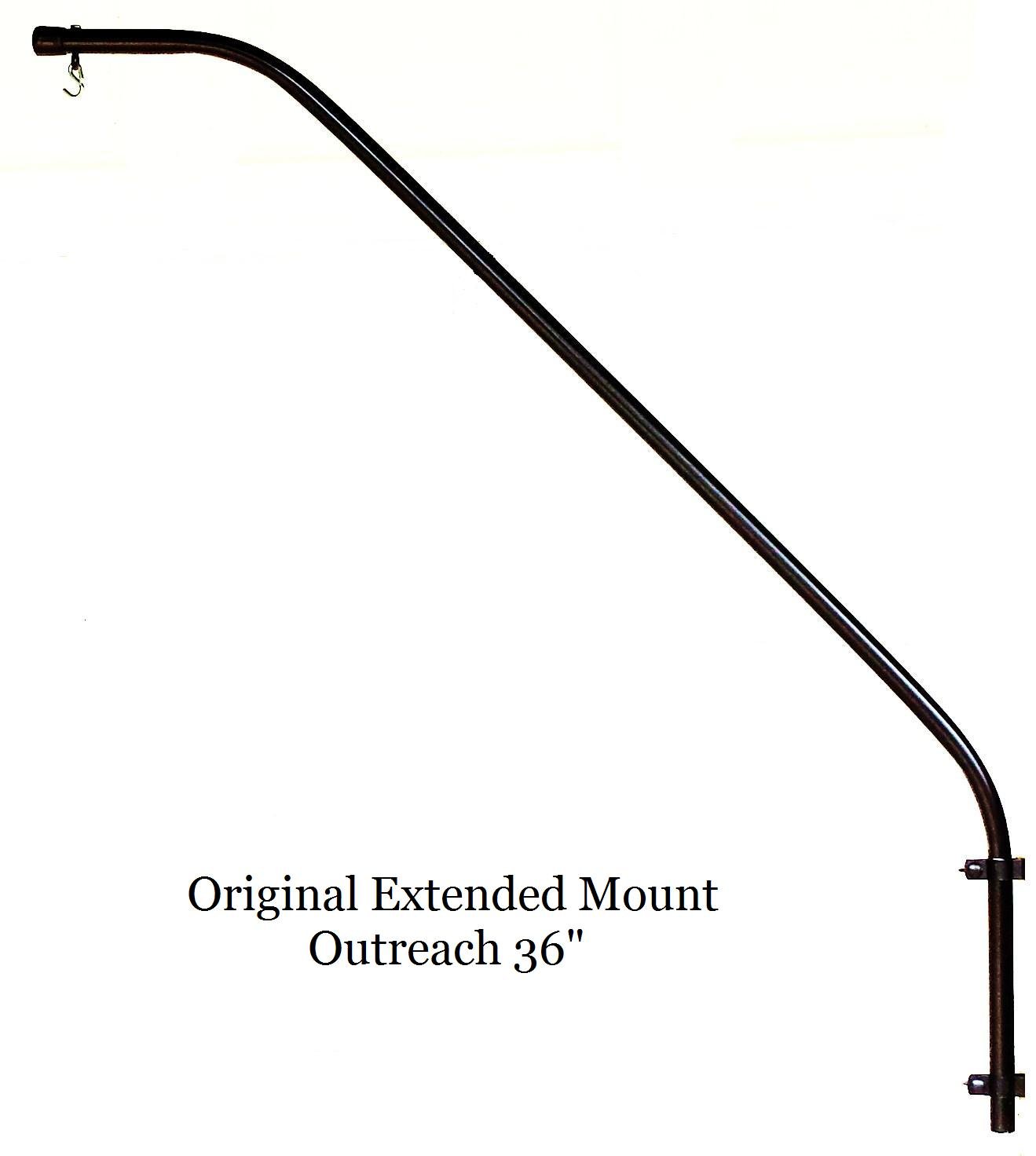 I also finished installing three swinging bird feeder arms on our balcony.  I started the installation a couple days ago, with that effort ending with a couple coats of black paint.  Now that the paint was dry, I could install the actual arm and hang some feeders out: two hummingbird feeders and one oriole feeder.  We've seen quite a few of both around here, including a nesting pair of Bullock's Orioles near the southeast corner of our property, in a black willow along the irrigation canal.  I like these swinging arms, though I wish they were made of a bit heavier gauge steel.  Still, they're strong, mounted easily to the balcony rail columns, and the swinging action is perfect for getting the feeders out over the yard (instead of the nice, clean balcony floor).  The hardware that comes with them assumes you're mounting them to wooden beams, but all I had to do to make them work was to buy some good sheet metal screws and an “L” bracket to hold up the bottom.  This was both inexpensive and easy.  The black paint was a choice of mine, to make the swinging arms match (and blend in with) the balcony railing.  That worked great!

The dogs and I just got back from a roughly one mile walk, which we made very slowly because it's hot outside.  Our thermometer reads 90°, and I believe it.  The weather site says it's 23% relative humidity right now – not bad.  Except that I know that's wrong, because we have irrigation running upwind of us – it's probably more like 80% at our house.  When we had walked about a quarter mile away, the humidity dropped sharply; the difference was easily perceptible.  The dogs had one exciting moment along the walk today.  They all stayed on leash, but at one point they all three (even the ancient and venerable Mo'i!) zeroed in on a dead robin about 4 feet off the road.  Suddenly I had three dogs pulling me with about 500 pounds of force.  It was simply not possible for me to hold them back – until it occurred to me to grab onto my neighbor's fence post.  For a good minute or so, those damned dogs did their level best to separate my left arm (holding their leashes) from my body.  If they could have mustered just a few more pounds of force, they'd have succeeded.  When I hold my two arms straight out in front of me now, my left arm is now about a half inch longer than the right.  If it's still that way in the morning, I'm going to be a little worried about it!
Posted by Unknown at (permalink) 5:57 PM No comments:

His very own Harrier...

His very own Harrier...
Posted by Unknown at (permalink) 9:15 AM No comments:

Language distribution...  Here's a simple graphic showing how many people speak each of the world's major languages.  There were definitely some big surprises here for me!  High resolution version here...

Progress in Paradise...  Debbie's still getting a little better each day.  Her appetite (which has been suppressed by the pain meds) is starting to kick back in.  We had pizza yesterday afternoon, which is by far the most substantial food she's had in two weeks.  Swelling and bruising is slowly getting better, but not fast enough for her :)

Yesterday morning a gaggle of neighbors (Tim D., Maria S., and a bunch of little S.'s) came out, and we all pulled mustard from our field.  Tim is running alfalfa and barley on our field, and one section – about a half acre – is more mustard than crop.  There's no way to get rid of that other than pulling it, all 10 bazillion plants.  We worked on that for a couple of hours yesterday, and about three hours this morning, and now its about 75% gone.  We've made giant piles of the pulled mustard, which we'll be hauling up to an old quarry a half mile away, to dry and be burned.  Monday morning we'll finish up the last of it.  Pulling mustard is pretty low on my list of fun things to do, but ... doing it in a group like this, in soil softened by irrigation, with lots of joshing and good conversation ... that makes it a lot more interesting.  I walked back in this morning with a stiff back, a serious thirst, and a big smile.  I'd do it again in a heartbeat.

Yesterday morning, right after we finished pulling mustard, Ryan O. (our heating and air conditioning guy) showed up to reconnect our air conditioning compressor.  He had disconnected it last fall for us, so that I could dig a trench under it for water, network, and gas connections to the shed.  When he lit it off, there was the most lovely burst of cool, crisp air on our second floor.  It's been sweltering up there with our outdoor temperatures in the high 80s and low 90s.  Now it's just sitting there at 72°, and feeling ever so nice when I come in from outside.  Yay Ryan!

Not long after Ryan left, my new brush mower showed up.  This is a 20 HP beast that will chop through 6' tall brush and 2" diameter saplings.  I hook it to my ATV, which gives me a combo that I can get into just about anywhere.  The thing was a kit, naturally.  It took me about 3 hours to uncrate it, assemble it, fill it with oil and gas, and light it off.  The engine is electric start, and the thing lit off the very first time I cranked it.

There's a lot about a quarter mile north of our place that just sold early this year.  The new owners haven't built on it yet, so it's just two and a half acres of weeds.  Those weeds were taller than me – 6 or 7 feet tall in places – and some of them had 1" “trunks”.  I called the new owners and got permission to mow it down, and that's what I used to test out my new mower.  It worked like a champ!  I only managed to stall the mower once, in a particularly tall thicket of something that looks a bit like tumbleweeds.  The rest of it all went down effortlessly.  It was hot, dusty work, but otherwise not physically demanding.  Ninety minutes and the field was down.  Yay!

I'm not sure what I'm going to do today.  For now, I'm just going to sit and enjoy my apple juice and chair :)
Posted by Unknown at (permalink) 9:11 AM No comments: