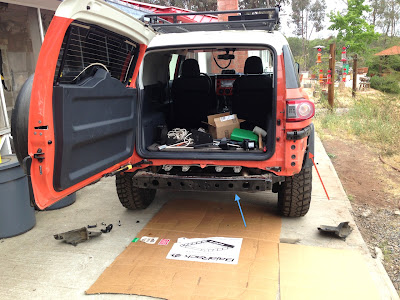 I'm currently working on the rear bumper and some additional lighting (more on that in a later post).  At right is what the back of the FJ looked like after I finished disassembling the factory rear bumper.  The blue arrow points out the steel core that's hidden deep inside the plastic cover (purely cosmetic) of the factory bumper.  That steel is quite sturdy, unlike the plastic cover.  The red arrow shows the rear quarter panel with the pretty plastic removed.

The challenge for All-Pro (the maker of my new bumper) was that the pretty plastic for the rear quarter panels needed to remain intact - but that plastic is made out of a single piece that incorporates both rear quarter panels and the plastic cover of the bumper itself.  In the photo below you can see this piece as it looks when removed from the vehicle, at a point when I'm about halfway through the modifications - modifications that involve drilling and sawing the plastic! 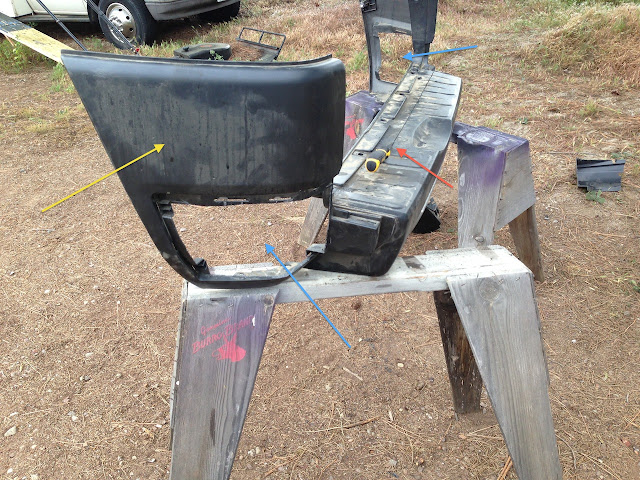 The red arrow points out the hand saw I used to make most of the modifications (the use of this kind of saw was recommended by All-Pro).  The saw has a yellow-and-black handle, and the blade is pointed away from the camera.  If you look closely you can see the kerf of the cut I've already made across over half the width of the bumper plastic.  The blue arrows point out areas that are now open, but used to be solid plastic – these I removed by drilling a hole to allow the saw to start, then sawing all around the edges.  Finally, the yellow arrow points out the left rear quarter panel's pretty plastic – salvaging this is the entire point of the modification exercise.

Hacking away at the plastic of my brandy-new FJ was a little wierd :)

At this point the new bumper is mounted, though a few little details remain.  I am waiting for some lights to arrive so I can install them in the provided holes for the bumper.  We've also ordered a nice hitch receiver cover that I'll install, as it will be a while before we actually use that hitch receiver for anything.  I've also got a few details left, like re-mounting the mud flaps.  When that's all finished, I'll post a photo of it.

Debbie took a close look at the new bumper yesterday and pronounced it “studly”.  I think she's convinced that even i cannot hurt our new FJ now...

The armor on the bottom is about half finished.  The front suspension skid is completely installed, as is the transmission skid.  The transfer case/exhaust skid has a fitment problem which All-Pro is investigating for me.  I've installed one of the four lower link skids; I got stopped by nuts torqued on so hard I simply could not remove them with tools in hand.  However, I've now got a 24" breaker bar, and that will hopefully do the trick!
Posted by Unknown at (permalink) 6:43 AM No comments: