The perfect woman... Via reader Jim M., who swears this is a true story:


A man was dining alone in a fancy restaurant and there was a gorgeous redhead sitting at the next table. He had been checking her out since he sat down, but lacked the nerve to talk with her. Suddenly she sneezed, and her glass eye came flying out of its socket towards the man. He reflexively reached out, grabbed it out of the air, and handed it back.

'Oh my, I am so sorry,' the woman said, as she popped her eye back in place. 'Let me buy your dinner to make it up to you.'

They enjoyed a wonderful dinner together, and afterwards they went to the theater followed by drinks... They talked, they laughed, she shared her deepest dreams and he shared his. She listened to him with interest. After paying for everything, she asked him if he would like to come to her place for a nightcap and stay for breakfast. They had a wonderful, wonderful time..'

The next morning, she cooked a gourmet meal with all the trimmings. The guy was amazed. Everything had been so incredible! 'You know,' he said, 'you are the perfect woman. Are you this nice to every guy you meet?'


Posted by Unknown at (permalink) 7:06 AM No comments: 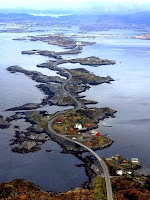 Amazing ocean landscapes...  The one at right is from Norway; many more on this site.  I'd love to visit Norway someday...
Posted by Unknown at (permalink) 6:39 AM No comments:

Coronal heating mystery solved?  I've been reading for years about this science mystery – temperatures in the corona (the plasma around the sun) are over a million degrees, and nobody knew where the energy came from to heat it.  Now there's an explanation, involving the sun's polar magnetic fields...

This is classic science at work: hypotheses confirmed or disproved by actual observations.  Unlike, for instance, what passes for “climate science” (largely funded by we, the taxpayers, of course).  In that field the norm has deteriorated to cherry-picking (mostly old) observations, adjusting them in arbitrary and capricious ways, then plugging them into models that spin cotton-candy fantasies seemingly designed to attract more grant money.  These two kinds of science are not the same thing at all...
Posted by Unknown at (permalink) 6:36 AM No comments:

Goats on cliffs...  What is it with goats and cliffs, anyway?  Goats seem to have a strange attraction for places that threaten to kill them.  This web site has lots of photos...
Posted by Unknown at (permalink) 6:26 AM No comments:

Uh oh...  It's been a while since I last posted a snapshot of the Google Unemployment Index.  The past couple of weeks have seen a spike up, just when (in previous years) we normally see a spike down, mainly because of seasonal hiring.  Similarly, the first of each year we normally see a spike up because of the seasonal workers being out of a job.