A Suggestion for the Obama Campaign...

The Obama campaign recently selected their official 2012 slogan: “Forward”.  We respectfully suggest this graphic to go along with their lovely new slogan: 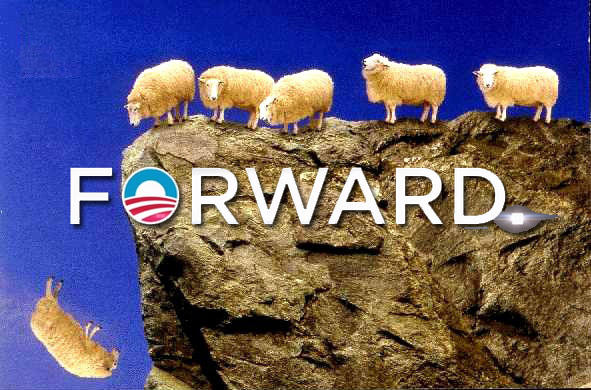 Posted by Unknown at (permalink) 6:34 AM No comments:

GIMP (Gnu Image Manipulation Program, the free open source image editing software) 2.8 is the long-awaited next major upgrade.  It (finally!) includes “single window” mode, which many people (including me) prefer over the current user interface.  It also includes many improvements to the underlying image manipulation algorithms, including some support for higher color depths (24/32 bits).

Unfortunately for me, the Mac OS ports aren't yet released, so I haven't been able to actually try it...
Posted by Unknown at (permalink) 6:21 AM No comments:

Cats and Dolphins, Playing Together...

Via my mom: a cat and some dolphins, playing together (not embeddable, sorry)...
Posted by Unknown at (permalink) 6:07 AM No comments:

Fifty-year old manure spreader. Not sure of brand. Said to have been produced in Kenya. Used for a few years in Indonesia before being smuggled into the US via Hawaii. Of questionable origin. Does not appear to have ever been worked very hard. Apparently it was pampered by various owners over the years. It doesn't work very often, but when it does it can really spread the manure and sling it for amazing distances. I am hoping to retire this manure spreader this November.

And the evidence comes via the plucky Mars rover “Opportunity”, currently exploring the Endeavour Crater.  It's now eight years into it's 90 day mission...
Posted by Unknown at (permalink) 5:59 AM No comments:

The Life of Julia...

I just read an apt metaphor for the repeated mistakes of the Obama campaign, but I'm not sure who to attribute it to – it's been picked up by numerous sites with conflicting attribution.  The metaphor: the ACME exploding cigar.  Obama's campaign team keeps buying (and lighting) another of those cigars every few days.  Most recently we had their exposure of the Romney “dog on the roof” incident morphing into “Obama ate dogs” (boom!), and their pointing out that Romney's grandfather lived in a community known to include polygamists morphing into the disclosure that just about every male in Obama's lineage except Obama himself (so far as we know) actually was a polygamist (boom!).  As noted below, Obama's recent speeches taking personal credit for the Obama raid are looking like perhaps another ACME cigar.

And here's yet another.  Still up on Obama's campaign site is The Life of Julia.  It's an almost unbelievably blatant piece of propaganda supporting the entitlement mentality state.  The more I look at it, the angrier I get – and it's not just me.  This deserves to be another ACME cigar, and I see some buzz building on it, so maybe it will.

Another thing occurs to me as I look at The Life of Julia: it's a great illustration of the gulf between those with the entitlement mindset and those without it.  I'd be willing to bet you that a great many people read this and say to themselves “Yes, that's right!  That's how it should be!  I'm voting for that Obama guy, 'cause he gets it!”  Other people (like me!) read it and say “What the hell is wrong with these people?  Are they missing some essential gray matter or what?”  People in the first group, with that entitlement mindset, dominate Greece today – and are majorities in other European countries.  They don't yet dominate here in America.  Whether they're the majority here or not will be measured to some extent this coming November...
Posted by Unknown at (permalink) 5:53 AM No comments:

Obama Pissed Off the Wrong Guys...

Many Navy SEALs and other Special Forces “operators” are quite unhappy about the way that Obama is publicly taking credit (“spiking the football”) for the raid that killed Osama bin Laden.  They're discomfited by the unseemly braggidocio, and they feel endangered by some of the public disclosures that have been made.  Now there's an ad (below) being aired expressing this anger, and some SEALs and “operators” are signing up to take their reaction to the public.

This is one group of people I wouldn't think the Obama campaign managers would want to have agitating against them.  But they've gone and pissed them off royally, and it's shaping up like Kerry's “SWIFT boating” all over again...

Posted by Unknown at (permalink) 5:34 AM No comments: