All four of these are modern copies of older originals that I do not have.  They're all undated.  The subjects in each of them are my mom and her brother (my uncle) Donnie.  I don't recognize the locations, but most likely they're around my mom's childhood home in Lincroft (going by her apparent age in the photos).  All four say “Elinor + Donnie” on the back, in my mom's handwriting.  Guessing at my mom's age in the photos, I'd say she's between 2 and 6 years old, putting these photos at '37 to '41.  Donnie's getup in the last two is interesting – check out those socks and odd poufy shorts!

Posted by Unknown at (permalink) 6:40 AM No comments: 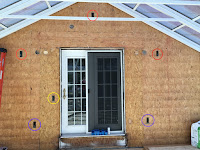 Paradise ponders...  I finished up the electrical work out in our sun room.  Well, it's not actually done ... but it's done enough so that the wallboard can be installed, and what remains after that will be very easy.  In the photo at right you can see cutouts for our new lights (in red circles), the light switch (in the yellow circle), and the outlets (in blue circles).  These cutouts will be covered by wallboard, which I'll then cut out to fit the “old work” electrical boxes that you see lined up on the door sill.  The wallboard holes will be smaller than the holes I've cut in the OSB sheathing – this will allow the “ears” on the electrical boxes to grip the back of the wallboard.  Behind the sheathing that's now all back on the wall is all the new wiring that I've done.  I had to route a total of seven pieces of cable (some 2 conductor, some 3 conductor) to get everything I needed in place.  I also ripped out four old pieces of cable that were used for the old lights (there were just two of them) and the single duplex outlet that was here.  The door you see in the photo is one of the four doors we're replacing in this remodel.  The new door will be centered in the space, with a sidelight on each side of it.  This was a dusty, dirty job, mainly because when I pulled sheathing off I exposed old insulation that contained a lot of dust – and in the relatively small enclosed space of the sun room, the concentration built up quickly.  I'm very glad to be done with that work!

We had visitors yesterday, a pleasant surprise indeed.  Two of the visitors were old friends of Debbie's, from her San Diego area agility competition.  Those two brought a couple of people we hadn't known before, not agility people but most definitely dog people.  They were all up in Salt Lake City for a conference, and drove up yesterday to spend the afternoon with us.  It was a delight to see these people we knew from San Diego, and it gave Debbie a chance to catch up and “talk dog” all afternoon.  We all went to Angie's for a fine late lunch, and everyone left with happy palates and full tummies.  The chicken noodle soup and chocolate pie were particular favorites.  Best part of all: we're going to meet up with them next Saturday afternoon at the Red Iguana in SLC, where a feast is planned.

Just before we went to Angie's yesterday, I took Cabo and Mako for our daily walk.  The fall color on the mountains just east of us is now quite prominent.  If you embiggen the two photos below you can see the orange that's now spreading across the higher altitudes visible there.  From the color I suspect that the plant is scrub oak, a common hillside shrub here.  The visible “peaks” are about 7,000' high, a bit over 2,000' higher than our home. 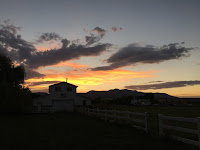 In the evening yesterday we had a lovely sunset.  This photo was from our back yard, looking west toward our barn, silhouetted...
Posted by Unknown at (permalink) 6:25 AM No comments: