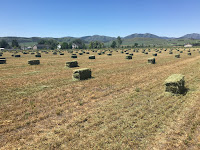 Paradise ponders...  The field in the photo at right is our south alfalfa field, just after it was baled (on the first cutting of the year).  Those bales are more than twice as close together as the best cutting last year (the last one).  Scott N., the fellow who leases the field from us, is indeed a happy fellow.  All of the fields he leases are producing at a high level this year, but he tells me that our field has the highest yield per acre of all of them.  He's not sure why, but he's absolutely positive that he likes it :)

For about a week now, we've had the two puppies in separate crates.  They often bark at each other across the 3 feet or so that separates them.  It occurred to me (just) today that perhaps if they couldn't see each other, they would fuss at each other less.  So today I tried draping a blanket across the end of one crate (Cabo's) – and it seems to work!  Debbie reports much less barking today.

I've spent a few hours today dealing with bills, trying to straighten out the air travel mess from last month (when I canceled some flights, added some, and rescheduled others, and changed all sorts of things – all by phone, so no paper records).  I think I finally got through it all.  Sheesh...
Posted by Unknown at (permalink) 2:01 PM No comments:

This is ... quite the court transcript.  I've never seen anything like this before :)
Posted by Unknown at (permalink) 10:01 AM No comments:

The card player...  My mom loved to play cards – almost any game was fine with her.  For a time in the late '50s and early '60s, she was a fairly serious contract bridge player, playing several evenings a week.  She was consistently one of the top ten players in New Jersey during this period.  As we kids got older, she had less evening time for that sort of thing, and her card playing became more social and recreational, and less serious.

I asked her once how she got started playing cards, and why she loved them so much.  Part of the answer I could easily guess: her dad and his friends (both in Maine and in New Jersey) were avid card players – usually penny-ante poker, accompanied by lots of beer, cigarettes, joshing, and laughter.  Even when she was quite young, they often let her join the game (and participate in the beer, cigarettes, cussing, and joshing :)  Purely recreational and social.

The other part of the answer, though, was a surprise to me.  She joined a bridge club in high school, found that she had a real talent for the game.  There were two things that were easy for her, but that most people found quite difficult.  First, she had no problem remembering all the cards played in a game.  Not just which cards, but who they were played by and in what order.  Up until a year or so before she died, so far as I can tell her card memory was perfect.  Secondly, the complex bidding system used in contract bridge made sense to her almost instantly (that's something I've never been able to wrap my head around, despite trying several times).  Two months after she joined the bridge club (this was in 10th grade), she was the number one player at her school – and she stayed number one until she graduated.

That experience with the bridge club was her gateway to serious card playing.  By “serious”, I mean that she studied each game she learned to understand the strategy and tactics.  This study wasn't from a book, but rather from her own experience and practice – but it was very deliberate.  If you talked with her about poker, for example, she could go on for hours about the subtle differences in the odds for different variations in poker.  She never did understand the mathematics of probability, but she did understand it intuitively, just through her own experience.  I once found an odds table for a particular variation of poker, and went through it with her.  She couldn't tell me what the specific probabilities were, but she could rank them.  For any given hand, she could quite accurately tell you how many to discard and draw, based on her intuitive understanding of the probabilities.  She had this same sort of knowledge for every card game she had mastered – and that was a lot of card games!

Whenever the family got together with her, no matter where or when, she always wanted to play cards with us.  I can't think of anything that she enjoyed more.  As an adult, once I left the Navy (where card-playing is the standard time-passing mechanism) I rarely played cards – except when visiting with mom, or when she was visiting me.  In my head, playing cards is closely correlated to being with mom.  When I recall something about her (especially her laughter), very often it's associated with playing cards. 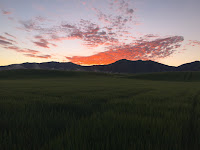 Morning in Paradise...  The field adjoining our front lawns was baled and trucked out yesterday.  The yield was unusually high, putting a big smile on Scott N.'s face (he's the fellow who leases our field to grow hay).  That cleared me to turn on the sprinklers for my lawn, which I did this morning.  As I cleared one nozzle, I noted the beautiful sunrise over the Wasatch Mountains to our east, and managed to get a photo of it looking over the fields across the highway east of our home.  That grass hay field is owned by the LDS church, who leases it out to Mike Clawson, a local dairy farmer.

This morning I'll be transporting the kittens we're fostering, along with their mom, to a veterinary clinic about 25 miles north of us.  This clinic works with the Four Paws rescue organization to neuter stray or feral cats at low cost.  In a week or so, we'll be handing these kittens – now over 3 pounds each – over to Four Paws for adoption.  The little calico girl will be staying behind with us...
Posted by Unknown at (permalink) 5:33 AM No comments: