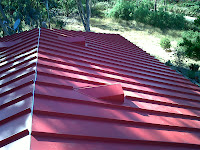 I made it up on the roof today and took a couple snaps: 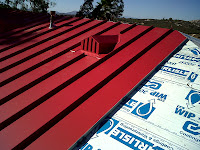 The ridge caps are the very last part to go on.  They can only do those after all the panels are up.

If it rains now, we're gonna have lots of little leaks.  Fortunately the chances of rain are approximately zero...
Posted by Unknown at (permalink) 5:15 PM 1 comment:

Along the way home from checking out the fire yesterday, I got thirsty – so I stopped in a Starbucks in El Cajon to grab a cup of iced tea (they have some very good plain old iced tea, and not too expensive).  I got in line behind about four people, and right in front of me two guys in suits were having a discussion about their computers.  Both looked quite prosperous and successful, and appeared to be in their late 30s or early 40s.  I've no idea what their names are, so I'll call them Joe and Larry.  Here's my reconstruction of their conversation when it started to get interesting...


Joe: I love my Macbook!  All the noise I got with my old Thinkpad is gone!

Larry: You mean your old one had noisy fans or something?

Joe: No, the sound was noisy.  The Apple guys said it was because the audio cables were black?

Larry: Black cables? Why would that make a difference to the sound?

Joe: The Apple guys said their white cables reflected noise, while the black cables absorbed it.  All I know is that now when I play my iPod, the sound is great!  They must have been right.  White cables rule!

Larry: I'd never have thought the color would make any difference...

(at this point, I couldn't resist jumping in)

Me: You're right - cable color doesn't make any difference to their performance.  It could be the Apple cables have better shielding internally, or it could just be that the Macbook's speakers are better.

Joe: (very defensive, and immediately angry)  How do you know?  What are you, a digital engineer or something (in a sneering tone)?

Me: (sarcastically) No, but I'm a 17th level centrifugan.

Me: (after a pause in which I despair for mankind's future) What do you guys do?

Joe: I'm a lawyer - corporate law; I work for [a local biotech firm].

Me: One large iced tea, please.  (and I make my escape)

You just never know what you're going to run into in El Cajon.  My iced tea was very good.  I spent the remaining half hour drive home contemplating white cables, silly corporate lawyers, and credulous combustion engineers.  And wondering if I should start the cult of centrifugans...might be some money to be made there.  Leastways, out toward El Cajon...
Posted by Unknown at (permalink) 7:48 AM 1 comment:

Depressing Video of the Day...

Here's a movie showing the unemployment rate (as reported by the government) by county, over the period starting just before the current recession up to today.  I recommend having a good dose of alcohol nearby before viewing...

Scott Adams in the WSJ...

With a very informative (and funny, of course!) piece on green houses.  Here's a teaser:


If your local building code doesn't already require a radiant barrier—a type of insulator for the roof—then look into it. I'm told that should be on the top of your list, at least for warm climates. This would be a good time to point out that nothing you learn about green building materials will be supported by relevant data that is in the proper context for your particular home. But the rest of your life is probably a mess too, so you'll get used to it fast.

But go read the whole thing.
Posted by Unknown at (permalink) 6:49 AM No comments:

No, I'd never heard of a concatenative language before, either.  But I've used one (Forth) without knowing it.  I used Forth many moons ago, and though I haven't touched it for at least 25 years, I remember it as being fun, unexpectedly powerful (considering the alternative was assembly language), amazingly portable (there were Forth interpreters on every microcomputer I was working with back then, something like a dozen different instruction sets).

I just ran into a little blurb on Factor, a much more modern concatenative language.  I haven't used it, just read about it a bit.  It's stack-oriented, much like Forth is (yes, Forth is still around!).  But it's got all sorts of interesting features that Forth doesn't...
Posted by Unknown at (permalink) 6:46 AM No comments:

Oh, This is SO Confusing!

Google's unemployment index has done it again.  Confusalated me, that is.  What the hell does the recent jump and fall mean?  I have no idea.  The most recent unemployment numbers from the government roughly correspond with the peak of two weeks ago, but those government numbers are completely bogus, having been rather arbitrarily adjusted.  Something I would really like to see is a simple chart showing (number of people working in the U.S.) / (number of adults in the U.S.) over time – but I have been unable to locate this data.  Instead, the government apparently thinks we're all mushrooms (they keep us in the dark and feed us bullshit)...
Posted by Unknown at (permalink) 6:41 AM 1 comment: 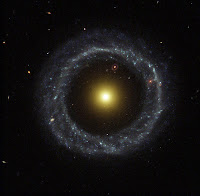 No photos today, but Friday and yesterday Chris and the boys were here and working hard.  The result: about a third of our roof is now covered with bright red metal!  Five of the twelve dormer vents are installed, and over half the “penetrations” (exhaust vents, antennae, etc.) are done.  They're making great progress!

Saturday afternoon, driving home from the fire scouting trip I blogged about below, I noted that our bright red roof is very visible from a mile or so away as you drive toward our house.  It looks quite nice, constrasting with the green trees around it.  When I fly out of San Diego (as I am in mid-September, on a trip to England), it should be very easy to pick out our house – there are no other red roofs for miles around...
Posted by Unknown at (permalink) 6:29 AM No comments:

We had a bit of a scare yesterday.  First Debbie spotted a plume to our northwest that looked like smoke (sometimes it's hard to distinguish between clouds and smoke; the color can be quite similar).  Shortly after that our Internet connection went down (it works by a radio link to Alpine, 18 miles to our north).  I called our Internet provider, and he wasn't sure what the cause was, but his three valley networks centered on Alpine were all down.  He'd heard that the fire was in the Harbison Canyon or Crest area – and that was very worrying to us, as those communities are actually quite close to us, in precisely the direction that smoke was coming from.  The news outlets (as usual) were useless, so I jumped into my truck to go take a look.

As I drove up Skyline Truck Trail, just before topping the hill that leads down to the town of Jamul, I got a view of Cajon Mountain in the distance. It was clearly burning, with smoke trails originating at various points on its south face (the side toward me).  This was a bit of a relief to me, as Cajon Mountain is much further away from us than Crest and Harbison Canyon.  Also comforting were the first news reports, which started coming in right around the same time.  They placed the fire in the area of El Monte Road, just south of Cajon Mountain.

I drove on through Harbison Canyon (no sign of fire there!) and up to Interstate 8.  Then I drove west on 8, grabbing the two photos with my cell phone and scoping out where the fire was.  I could see aircraft on the fire, and engine companies on the ground (news reports said over 20 companies were on the job), so it looked like the fire response was terrific.  This is so, so good for us to see after the debacle we lived through in 2007.  The map at right (also online) is my rough eyeball estimate of the fire's location.  I could be off by the proverbial country mile, so don't take it as anything other than an estimate, please.

By this morning's early light we can see no smoke coming from Cajon Mountain.  There are no updates to the news reports from yesterday, which variously claim that between 2,000 and 3,000 acres burned.  Some people (including two climbers) were rescued by helicopter, but so far as I can tell nobody was hurt and no structures were damaged.

One thing that's a little disconcerting for us chaparralies: Cajon Mountain completely burned over in 2007.  Here we are, just under three years later, and there's already enough fuel there to sustain another wildfire.  Sheesh!
Posted by Unknown at (permalink) 6:19 AM No comments: