One of the “features” of Obamacare is an absolutely enormous transfer of wealth from the young (through their mandate to purchase health insurance) to the old (the dominant consumer of health care, and therefore dominant cause of health care expenses).  In other words, Obamacare purports to solve the problem of healthcare expenses for the elderly by making the younger folks pay for it.

Many opponents of Obamacare imagine that in the long run this theft of young people's money will drive young people away from the Democratic party.  Since this is one of the Democrats' key constituencies, this possibility is seen with some glee by the Republicans (the likely beneficiary of youth disenchantment with Democrats).  This would then give the Republicans the legislative and executive authority to repeal Obamacare.

Personally, I think it's more likely that if the Republicans ever gain the political power to repeal Obamacare, they won't (all their campaign promises notwithstanding).  Instead, I suspect they'll modify Obamacare in ways that retain the popular part, make some nominal (but electorate appeasing) adjustments to the wealth transfer aspects, and keep every bit of the opportunity for regulation and exception carve-outs – so they can keep the lobbyists coming, cash in hand.

But something I hadn't considered before is that there is a completely different solution to the wealth transfer problem.  Think about this from a younger person's perspective.  They're getting taxed, heavily, to pay for older people's health care.  Why not just get rid of the older people?  No old people, no healthcare expenses to pay for.  Problem solved!  And apparently, there's solid support for this idea:


I think I'll do a little preliminary research on other countries Debbie and I could live in...
Posted by Unknown at (permalink) 9:46 AM No comments:

Every time – every time – I read a New York Times editorial on a subject I'm informed about, I end up getting angry about their ability to shovel pure bullshit down the maws of their less-informed readers.  They often don't even make a token effort to be truthful or objective – they just change the “facts” to suit the progressive narrative, and run with it as if it were true.

Most of their readers, presumably, swallow the lie whole without ever knowing they've been lied to.

Kent Scheidigger does what I wish I'd done: takes one of these propagandatorials apart, meticulously.  Kudos, Kent.

Jeff Bezos (who is openly libertarian) just bought the (quite liberal/progressive) Washington Post for $250M.  At the rate the NYT business is declining, he could buy them for the same price pretty soon.

That could be interesting...
Posted by Unknown at (permalink) 9:35 AM No comments:

Everything You Need to Know About Obamacare...

...on a single entertaining web page.  A sample:

When Obama promised everyone making under $250,000 a year that he wouldn’t raise our taxes, I was like:

But then he introduced Obamacare and it had 18 tax hikes…

Posted by Unknown at (permalink) 9:21 AM No comments:

Crossbar says it can put a terabyte of nonvolatile Resistive Random Access Memory (RRAM) on a single small chip.  Access times are 20 times faster than flash.  The structure of the chip is three dimensional, meaning that the storage capacity is proportional to the volume of the chip, not the area (as is true for conventional DRAM or flash memory).  This offers the potential of fully electronic nonvolatile RAM with capacities equaling or exceeding those of rotating magnetic memory.

Hard disks and tape are gonna die.  The only question is when...
Posted by Unknown at (permalink) 9:18 AM No comments:

A book review in the Wall Street Journal (my favorite newspaper), written by Bruce Schneier (my favorite security commentator), about a book by Radley Balko (my favorite libertarian writer).  Sweet!
Posted by Unknown at (permalink) 9:13 AM No comments:

Via my mom.  I saw this one coming about halfway through...

Posted by Unknown at (permalink) 9:09 AM No comments: 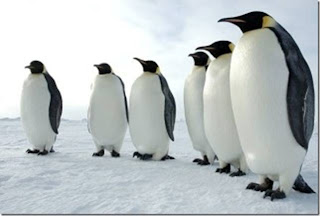 Did you ever wonder why there are no dead penguins on the ice in Antarctica?  Where do they go?

It is a known fact that the penguin is a very ritualistic bird which lives an extremely ordered and complex life. The penguin is very committed to its family and will mate for life, as well as maintain a form of compassionate contact with its offspring throughout its life.

If a penguin is found dead on the ice surface, other members of the family and social circle have been known to dig holes in the nearby snow, using their vestigial wings and beaks, until the hole is deep enough for the dead bird to be rolled into, and buried.

The male penguins then gather in a circle around the fresh grave and sing:

You really didn't believe I know anything about penguins, did you?  In the Dilatush family, the correct response to something like this is: “Sigh!”
Posted by Unknown at (permalink) 7:49 AM No comments: