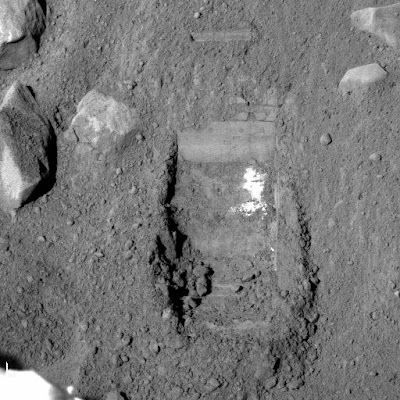 The Phoenix lander on Mars has begun its primary science mission. One element of that mission includes digging a trench into the Martian soil, looking for water ice or other evidence of past water. Just an inch or so down, it has uncovered a bright white layer – most likely either water ice or salts deposited by evaporating water (clearly visible in the photo at right). Further investigations will determine which it is. In either case, it's what the scientists sent Phoenix to Mars to find, so they are elated with this early success.

You go, little lander!
Posted by Unknown at (permalink) 5:02 AM No comments:

Here are a couple of clips from Senator Obama's victory speech:

... I face this challenge with profound humility and knowledge of my own limitations...

If Americans can elect a President this full of himself and this empty of substance ... then we deserve every consequence.

Isn't the proclamation of your own “profound humility” profoundly unhumble (not to mention unbecoming)?

And surely his hubris in making such a forthright declaration that he will heal the planet and stop the oceans from rising reaches a new high-water mark for any politician's hubris ... an accomplishment of sorts that is really quite remarkable.