Yesterday I worked from home (something I do on most Wednesdays).  Early in the afternoon, I felt like a cup of tea.  I put the pot on to boil, and while I waited, I played with the dogs.  Race (our youngest, a border collie) was being unusually affectionate.  Normally he's a non-stop player – wants me to throw a toy, wrassle with him, or some other kind of active play.  But yesterday he acted more like one of our field spaniels, wanting some attention.

So I sat down on the floor and gave him a hug.  He gazed at me with adoring eyes, tongue dangling as usual, and leaning into me.  While I was enjoying this moment of communion with my dog, I noted a feeling of dampness on my leg, near my ankle.  Then I heard something like the distant tinkling of water being poured.  So I looked down at my leg, and...my dog was pissing on me.

Not just a drip or two, either.  Nope.  A full-on, let-it-all-out, completely engaged piss.  Directly onto my leg.  Still with the adoring look in his eyes as he gazed happily into my face.

None of our dogs have ever done anything like this to me before.  Debbie's theory is that for whatever reason, he had to go really, really badly.  I'm not so sure myself...

A Google search on “my dog pissed on me” yielded over 15 million hits.  Clearly I'm not the first one this has happened to!
Posted by Unknown at (permalink) 4:30 AM No comments:

Posted by Unknown at (permalink) 4:22 AM No comments:

A Gift for Your Liberal Friends... You can buy them here.
Posted by Unknown at (permalink) 3:17 AM No comments: 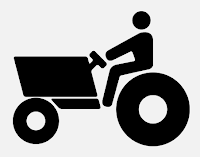 I tried searching for five things that I thought would be unlikely (like a tractor) – and in all five cases, there were multiple icons in the database.

These come from The Noun Project.  Here's their mission statement:


The Noun Project collects, organizes and adds to the highly recognizable symbols that form the world's visual language, so we may share them in a fun and meaningful way.

The contributors to this project sure put a lot of work into it!

All the icons are free, by the way.
Posted by Unknown at (permalink) 3:06 AM No comments: