The combination of aging eyes...

The combination of aging eyes ... and modern electronics is not necessarily a good thing, as I'm discovering.  I'm working on a project for our mud room, to turn the lights on and off with a touch of a cabinet handle.  Thankfully most of the parts are available in (now) old-fashioned DIP packages.  Some of the parts, however, are only available in packages intended for surface-mounting.  The part at right is one such; it's the capacitive proximity sensor at the heart of this little project.  It's available only in a SOT-6 package, which is tiny!  I've glued it to a piece of vector board (the green stuff with holes in it).  Those holes are a mere tenth-inch apart, which gives you some idea just how small this part is.  The wires that you see there, with black and red insulation, are 30 gauge wires – not much bigger than a fine hair.  Somehow I've managed to solder them onto their pins, after much trial-and-error.  I could only do this because I have a tip for my soldering iron that ends in a sharp point that you could hurt yourself with.  Also, I'm using a 5x magnifying glass and a nice, bright light.

I'm stopping for the day, as my eyes hurt and I can't hold my hands steady enough to do this any more.  Four more of those wires and I'm done with this one.  But I have another of these surface mount parts to do, too – yikes!  I'm beginning to see why so many guides I've read advise people not to do this.  I'm not sure it would really be any easier even if I had a circuit board, though.  This is the first time I've ever attempted to use a part this small; hopefully it will get easier with some practice.

Winter wonderland here today...  We must have had some thick fog here last night, because when we woke this morning we discovered that all the trees outside had acquired a thick layer of hoarfrost.  We took a drive around the area within a few miles of our home.  The first part of this trip is recorded on the video at right, which starts out as we were on the road alongside our property and shows you a couple miles of our local roads this morning.  More photos of other areas below: 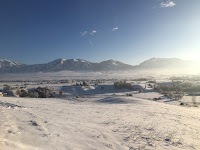 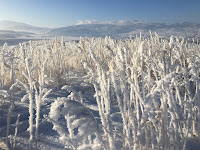 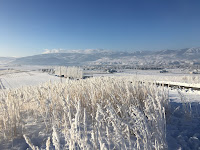 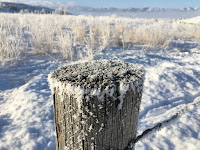 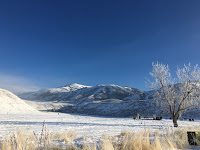 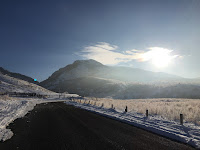 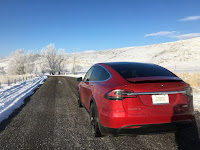 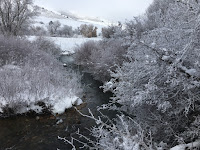 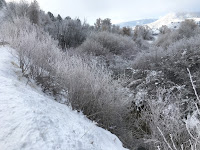 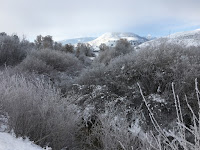 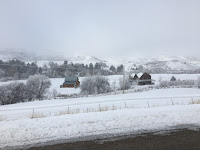 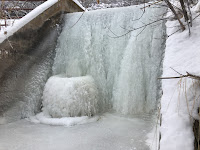 The last photo above shows a roughly 8 foot high waterfall where an irrigation canal loses some altitude.  The water was still flowing vigorously under that ice; I could hear it from 10 feet away.

I also took a few photos around our place: 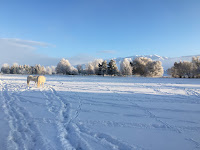 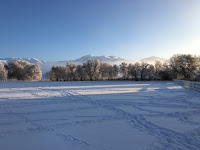 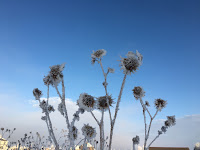 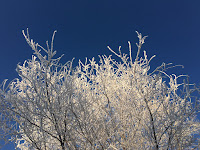 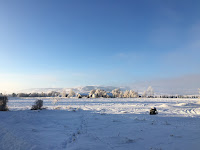 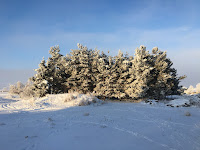 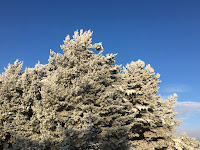 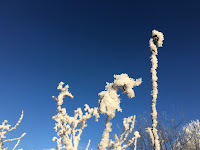 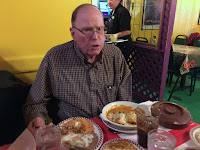 Paradise ponders, Model X edition...  Well, it actually happened – our Model X was ready at the promised time on Friday, and we took delivery.  That means we drove down to Salt Lake City (with our friend and neighbor Tim D., at right), had lunch at the Red Iguana (this was Tim's first visit there!), and then went down just south of Salt Lake City to get the car.  We spent an hour or so going through familiarization, very useful as there's so much about this car that's different than any other car we've ever driven.

Then we jumped in and scooted the 90 miles or so home, arriving with about 70% of the battery left.  That was a most interesting drive for me, trying to absorb all the new controls while simultaneously observing this new machine we bought.  The controls are similar enough to a “normal” car that it doesn't actually seem alien – but different enough, in ways both large and small, to be quite confusing.  An example of a small difference: the cruise control stalk is on the left of the steering wheel, instead of on the right like all our other vehicles (all Toyotas).  Also, the actions of the four motions are different.  On the other hand, one big difference: when you take your foot off the accelerator pedal, the car feels like you're applying the brakes – because the motors are reconfigured to be generators, and the car is loosing speed by using the kinetic energy to charge the batteries (regenerative braking).  To coast like you would in a normal car, you have to gently press the accelerator.  That one is going to take me a while to internalize. :)

On Friday night we took a short drive in the Tesla, mainly to see what it was like to drive it at night.  It's got some fancy headlights, and I was curious how the automatic dimming of the giant touch screen and instrument screen would work.  All that stuff worked great, but about a half mile into our little drive, we pulled up next to someone who had a little Toyota, two-wheel drive, and had slid the two right wheels off the pavement.  The car had two young couples in it, all locals (from Hyrum), but somehow they haven't figured out how to drive in snowy weather. :)  They were rather profoundly stuck.  We offered to run back home, get our pickup, then come back and haul them out.  They gratefully agreed, and we did – had them out and back on pavement in a jiffy.  The hardest part of the entire operation was untying the rope I'd used to haul them out.  It felt really good to help someone out on a nasty cold evening like that.

Saturday we drove up to Hardware Ranch for our first real test of the Model X as a touring car.  It was very cold outside – between 7°F and 12°F – but inside it remained a perfect 72°F.  One of the first things we noticed about the Model X was the almost instantaneous effect of the heater (we don't know about the air conditioner yet!).  There are also heated seats, a heated steering wheel, and a few other secondary things – but that instant heater is magic.  It reminds me of a VW Microbus my family had when I was a kid; that thing had a gas-fired heater that worked within a few seconds.  The big overhead window that Tesla likes to brag about is ... not bragged about sufficiently.  The visibility in the car is just stunning .. the only thing in the way of your visibility are the thin pillars between the windshield and the side windows.  Even the bluffs far over our heads were easily seen, just by looking up very naturally.  In our pickup or the FJ Cruiser Debbie and I are constantly running into situations where one of us can see something interesting (usually wildlife) slightly above the vehicle on one side, and the other of us can't see it at all because the darned roof is in the way.  Not happening on the Model X.

When you press on the accelerator in the Model X, you're in for a surprise – the power it has is (far) beyond anything else I've ever experienced.  It's fun, in the same way a roller coaster or similar fair ride can be – subjecting you to acceleration you're simply not used to.  All I've tried so far is pushing the accelerator maybe two-thirds of the way down – and I haven't yet had the intestinal fortitude to try “ludicrous mode”, which substantially adds to the acceleration the Model X is capable of.

Here's a couple photos of our Model X near the dam in Blacksmith Fork Canyon: 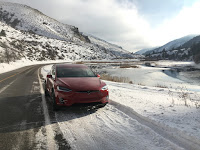 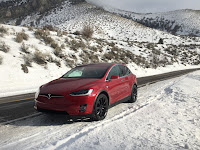 As we pulled into Hardware Ranch, we had a magical few moments as we drove through a cloud of sparkly ice crystals.  We were in bright sunlight, and somehow that cloud of microscopic ice crystals got blown right in front of us.  With our all-round visibility in the Model X, it was as if we were in a bubble with these magical sparkling lights all around us.  We had just enough time to say “Wow!” and it was all over.  It didn't seem real, more like a Hollywood special effects scene.  But it surely was beautiful!

Last night we drove the Model X to Maddox Ranch House for dinner, a Christmas gift from a good friend.  Here's what I had: a New York strip steak and a lovely cheddar vegetable soup.  Debbie had a ginormous ribeye that she could only eat about two-thirds of. :) 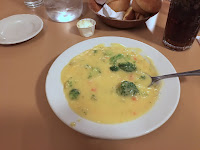 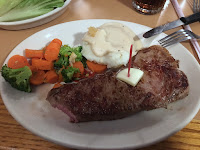 That was a roughly 60 mile round trip, including a climb and drop through the Wellsville Mountains.  We used slightly more than the estimated 25% of the battery charge to make that trip, which I suspect is because of the climbing we had to do.  It made me a bit nervous to leave the Model X in the parking lot. :)

Posted by Unknown at (permalink) 10:51 AM No comments: