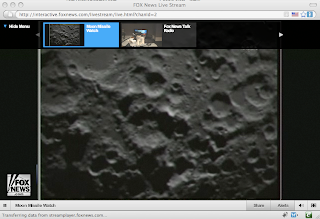 I'm watching the impact of the LCROSS satellite on the moon, live on streaming NASA video on the web.  Very cool...
Posted by Unknown at (permalink) 4:28 AM No comments:

Posted by Unknown at (permalink) 4:24 AM No comments:

Really, he did.  I read it on several news sites this morning.  I don't think it's a parody, and it's not an April Fool's Day joke – it is, after all, October.

I guess I have a mistaken notion about the Nobel prizes.  I've always thought that they were awarded for actually accomplishing something.  Evidently I was wrong.  Even the Nobel Committee's announcement confirms this:


The Norwegian Nobel Committee has decided that the Nobel Peace Prize for 2009 is to be awarded to President Barack Obama for his extraordinary efforts to strengthen international diplomacy and cooperation between peoples.


So it's the effort that matters, not the accomplishment.  This reminds me of the modern approach to education in many school systems, wherein students are assessed not so much on how well the know the material, but rather on the effort they made.  It doesn't matter if you get the right answer to a math problem; what matters is whether you tried.

Apparently that's also the case with the Nobel Peace Prize.  Only efforts matter.  And maybe not even them – I've heard a lot of talk about Obama's efforts, but I'm unaware of any actual efforts he's made.  Maybe there are some secret efforts that the Nobel Committee has been briefed on that us mere citizens have not.  Or maybe the Nobel Committee has an odd and unexpected sense of humor.  Or maybe they're just all crazy.

The latter seems the most likely.

So now Obama joins a long list of other winners of the Nobel Peace Prize.  Many of these winners are indeed worthy and admirable people of great accomplishment: Mikhail Gorbachev, Elie Wiessel, and Nelson Mandela among them.  But there is also an embarrassing list of losers who have won this prize: Jimmy Carter, Al Gore, Mohamed ElBaradei, Kofi Annan, and Yassar Arafat.  In that context, Obama's selection fits right in.


What a crazy, upside-down world we live in!