The logical conclusion...  Bill Whittle.  Listen to the man...
Posted by Unknown at (permalink) 12:02 PM No comments:

Paradise ponders...  Our neighbors Alan and Nikki L. invited us to the local Mormon church's “fall festival” last night.  Actually the event was a function of just one of the four wards that use the northern Paradise church (there's a southern church as well).  That meant the attendees were all people who live quite near us, and that we know many of them.

So what exactly is a fall festival?  Well, mainly its for the kids – and there were a lot of kids there!  There was food (soup, bread sticks, and desserts), games (all oriented toward kids of various ages), a talk by another neighbor (Wayne N., speaking at the left of the stage in the first photo) on the history of Paradise, and a log-sawing contest (last two photos).

Wayne's talk was interesting – several generations of his ancestors lived in Paradise, and he has lived here his entire life.  He's full of stories about people who have lived here, and who still live here – all the way back to when the townspeople fought the local Indians.  Prior to this talk I had no idea he knew so much about the local history, but perhaps I should have – because every time we see Wayne, we hear another story or two.  Some of the stories involve our property, which makes them particularly interesting.

The log-sawing contest involved teams of two people being timed as they cut a nice, dry, 8" log with an old-fashioned lumberjack's cross-cut saw.  Alan L. and I worked hard together to set the bottom bar for the rest of the teams :)

We had a nice time at this event, which normally would not be our kind of “thing” – kids and a room full of people would usually make us flee.  But this time it was a room full of friends and neighbors, with kids so well-behaved you'd think you were watching “Leave It To Beaver”.  Lots of people came over to say “hi!”, and were especially solicitous of Debbie (still on crutches). 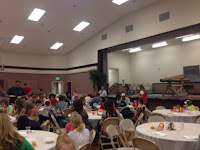 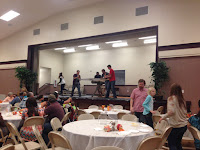 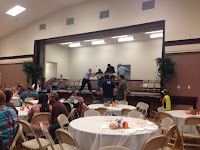 This morning I took my usual walk with Race and Miki (who's completely recovered from whatever made him limp).  Other than the beautiful scenery, a perfectly clear sky, crisp temperatures perfect for walking, and raptors in every direction, we didn't see anything in particular.  Oh, there was the covey of 20 or so quail that we flushed – that had the dogs quivering at the end of the leash for a while :)  Some photos: 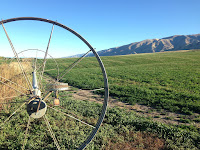 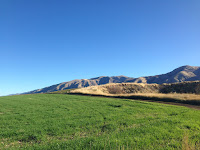 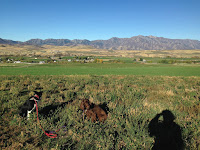 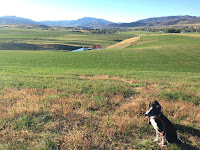 This afternoon Jim and Suzy F. are returning from their week at Yellowstone. They'll spend the night with us, then fly back to San Diego tomorrow morning.  Jim reports that they had a wonderful time at Yellowstone, and enjoyed perfect weather the entire time.  We're going to take them out to Maddox Ranch House tonight for a send-off dinner, and we hope to see them again up here.

The Golden Spike folks were here yesterday afternoon.  They got both generators and both propane tanks placed on their pads.  Each of these weighs between 1,000 and 2,500 pounds, so that was quite a bit of careful work.  They'll be back on Tuesday to do the wiring, then on Wednesday morning the gas expert will be here to plumb the tanks to the generators, and on Wednesday afternoon the “startup guy” will be here to run through each generator's provisioning and startup process.  The latter triggers the beginning of the generator's warranty period, so it's an important step.  Starting Wednesday afternoon, we'll be immunized from power outages.  Hooray!
Posted by Unknown at (permalink) 9:41 AM No comments: