It's getting much closer to ending!  The air compressor, 2KW inverter, and refrigerator plug are all wired up and tested.  I load-tested the inverter to 1700W without any problem at all.  For the air compressor test, I aired down one tire to 16 pounds, and aired it back up to 33 pounds.  Woo hoo!

But it gets even better.  Over the weekend I stripped all the masking tape from the panels that need both orange and grey deck coating.  I had a minor masking tape disaster - the glue from the masking tape stuck in big gobs to the wood.  I didn't want to chance trying a solvent, so I did it mechanically: I sanded with 220 grit to get rid of the glue.  I went through about 10 sheets of sandpaper real fast, as the masking tape glue quickly gummed up each new sheet.  But I got it all off!

Then I re-masked – with new rolls of masking tape! – to do the rubberized deck coating, a light grey in color.  The masking was easy enough.  Next came a two-part resin-based primer.  Once I mixed this, I had 90 minutes to work – and they weren't kidding!  About 100 minutes after I started (and finished, thankfully) painting, the remaining paint in the can turned hard as a rock.  The primer was kind of weird.  It had the viscosity of water, very thin stuff.  It went on as a beautiful bright white – but within 5 minutes of application, it turned water clear.  Weird stuff!  Once that was on, I roughly sanded it (per directions) with 60 grit sandpaper, then cleaned it off.

Finally I was ready for the rubberized deck coating.  This stuff I got from Cabela's, and it's a water-based paint that dries rubbery, and contains “crumbs” of rubber to add to the effect.  It's water-proof, oil-proof, dirt-proof – perfect for the surface of a platform that will hold two rowdy dogs.  This stuff was really odd to paint.  First, it was quite thick, like blue cheese salad dressing.  Second, the rubber crumbs kept sinking in the can, so I had to mix it every few minutes.  The first coat went on very thick, maybe a tenth inch (that's a lot for paint!).  It dried kind of like mud dries sometimes, with cracks between solid sections that averaged maybe 1/2" in diameter.  But I'd read about this online and wasn't worried; the second coat would fill in those cracks.  And indeed it did, as you can see in the photos below.  As I write this, I've just finished putting on the second coat, and the coating is looking very nice indeed.

So the platform's interior is done.  Well, the complicated stuff, anyway.  And the paint will be dry tomorrow morning.  That means it's time to assemble the final pieces of the platform.  It sure took a long time to get to this point...


Under the Affordable Care Act, premium subsidies—tax credits in ObamaCare designed to defray the cost of purchasing health insurance—will go to some seven million tax filers and flow to households earning as much as $94,000 a year. The credits are both advanceable and refundable, meaning the IRS will pay them first and verify the claims for them later, what some call "pay and chase."

Refundable tax credits are essentially a form of spending through the tax code, something the IRS has struggled to administer for years with other programs. That's why it's not far-fetched to say that these premium credits will go to a lot of people inappropriately, and that we can expect to see a lot of erroneous and fraudulent payments.

Look at the Earned Income Tax Credit. Whether you like this refundable credit or not, the Treasury Department's inspector general for tax administration reported in April that improper payments account for 21% to 25% of total EITC payments in 2012. Take the percentage of improper EITC payments and apply it to the approximate $1 trillion we'll spend on ObamaCare premium credits in the decade beginning 2014. The math shows that we could see between $210 billion and $250 billion distributed to those who shouldn't get it—because the IRS has no system in place to verify reported household income.

Put all the potential fraud and improper payments with these credits on top of the already soaring budget for the premium subsidies and we're headed for a disaster.

This speaks to something that puzzles me deeply about advocates of big government (i.e., Progressives and Liberals).  Anyone who experiences the joys of “service” at the DMV, or at the U.S. Post Office surely must at least have doubts about the efficiency and efficacy of government-run enterprises.  Anyone who has ever been in the U.S. military can regale you with endless tales of waste and mismanagement.  I was once part of a large working party on a Navy ship that had the job of taking a brand-new, never-used spare computer and throwing it over the side of the ship in a deep part of the Pacific.  Why would we do such a stupid thing?  Because the budgetary rules determined next year's funding level by this year's spending.  One way to spend a bunch of money: throw an expensive (roughly $300k) computer over the side!  That's your government bureaucracy at work.

I think the solution is more radical than what Senator Hatch proposes, though: the entire income tax system should be rethought from scratch, with an emphasis on simplicity and transparency.  Little Estonia is an inspiring example with its flat tax...
Posted by Unknown at (permalink) 7:23 AM No comments:

Tired of Voting for Rats?

This question strikes right to the heart of a perennial dilemma for me: in most elective offices, there isn't any candidate whom I want to vote for.  They're all rats!

In Mexico, the problem of rat candidacy is arguably even worse than in the U.S., and the people there are consequently perhaps even more frustrated than we are.  Sergio Chamorro, of Mexico City, had an inspired solution: he's running Morris, his cat, as the anti-rat candidate.  And his solution has in turn inspired others in Mexico to put up their own pets and farm animals as candidates.

Think about it.  Which sounds better to you?  A Congress populated by the likes of Pelosi, Reid, Graham, McCain, and Feinstein – or by Fido and Fluffy?  I know which makes me feel safer!
Posted by Unknown at (permalink) 7:14 AM No comments:

Time to Reexamine Our Government's Structure...


The Declaration of Independence vested all sovereign power in the people alone, while the Constitution established a government to manage that power in a republican fashion. While the people still swear fealty to the founding ideals, they have not put much thought recently into the problems the Founders tackled. As society has become more complex, the government has, too; Americans have not reexamined the structure of government, in an age in which it accounts for more than 20 percent of the national economy, to ensure it still reflects the republican spirit. In fact, there has not been a serious public discussion about the organization of the bureaucracy since the 1880s, even as it has doubled in size many times over. And so today, it is a vast enterprise of millions of workers, with precious little oversight from the people’s elected representatives.

Read the whole thing...
Posted by Unknown at (permalink) 7:05 AM No comments: 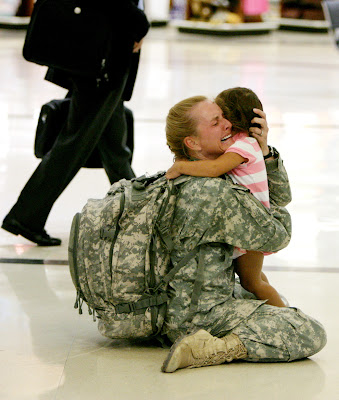 A collection of 40 of the most powerful photographic images ever taken (according to who, I'm not sure :).  Many of these are famous, like the one at right; most of them I'd agree are very powerful indeed...
Posted by Unknown at (permalink) 7:01 AM No comments: