Would eliminating the current state government completely and starting over with a clean slate appeal to you? Until I read this web site, I didn't know such a thing was even possible (at least, not without an actual revolution). The general idea is to call a “Constitutional Convention”, and rewrite the state's constitution from scratch.

Currently California's Constitution requires two thirds of the legistature to vote in favor of placing the question of a Constitutional Convention on the ballot, where it must win a majority of the voters to gain approval. The first part of this is unlikely in the extreme – it's hard to imagine two of the current legislators voting for this, much less two thirds.

This would be like a revolution without the guns and tanks. I want to think about this some more, but on a first pass I'm inclined to agree with Peter Robinson:

Will California default, forcing states and municipalities throughout the nation to pay higher interest rates to bondholders? Will it persuade Washington to bail it out, rewarding the Golden State's political class while punishing the citizens of prudent, solvent states such as Indiana or Texas? Or will California cut its budget so sharply that basic state agencies--the California Highway Patrol, for instance, or the Department of Corrections--will be impaired?

None of the answers are pretty.

Yet this financial crisis has produced one beautiful idea.

Jim Wunderman, president of the Bay Area Council, a business group, has begun calling for a constitutional convention. The current constitution, Wunderman argues, is so long, convoluted and encrusted with amendments that Californians ought to toss it out and start again from scratch.

To keep the political class from taking over the convention, Wunderman wants to choose delegates from the state jury pool. Does that sound like placing trust in chance? If so, you've got the idea. Ordinary Californians, redesigning the entire state government.

William F. Buckley Jr. once said, "I would rather be governed by the first 400 names in the Boston telephone book than by the faculty of Harvard University." Me? I'd rather be governed by a few hundred jurors from Los Angeles, San Francisco, San Jose, Irvine, San Diego, Bakersfield, Fresno, Modesto and Stockton than by all the lobbyists and union officials in Sacramento.

It is, as I said, a beautiful idea.

A clean slate. A system of government designed by ordinary citizens, not the political in-crowd. A beautiful idea, indeed...

Muslim Extremists Routed by ... Other Muslims! 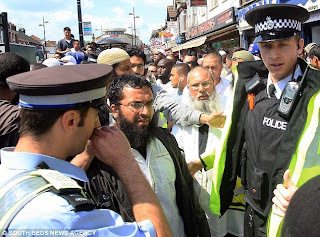 This is one of the most hopeful developments I've seen in a long time. Similar things are happening in Pakistan, as well. From the Daily Mail:

The Muslim community turned on extremists in their midst yesterday, telling them they were 'sick and tired' of their behaviour.

The latest violence erupted as arguments raged between fellow Muslims shortly after Friday morning prayers in the Bury Park area of the town. Passing traffic ground to a halt as the large group of moderates confronted about a dozen extremists.

As the radical Muslims began to set up their stall, they were surrounded by a crowd shouting 'we don't want you here' and 'move on, move on'.

Angry words were exchanged and scuffles broke out between members of both groups, with the extremists shouting 'Shame on you' and 'Get back to your synagogue'.

The moderates chanted 'Out, Out, Out', and after an uneasy stand-off, police officers were able to persuade the extremist group to leave the area.

Posted by Unknown at (permalink) 4:17 PM No comments:

You may remember the 60+ acre Willow Fire of May 23 (my post here). Well, a report came out today on the cause of the fire. I've read several news stories about this report (including the UT story here), and they're all a bit ambiguous. About the only thing they seem to be clear on is that the fire was started while a group of U.S. Department of Justice (Bureau of Prisons) employees were firing on the target range.

Hmmm... One wonders what they're firing out there – RPGs?

Posted by Unknown at (permalink) 3:40 PM No comments: