We're at 2 inches (5 cm) of rain for the storm.  The image below shows the NEXRAD radar image at 6:31 am this morning.  This time I've turned on storm tracks (that's the “Z1” with an arrow) and precipitation monitor.  The blue areas show frozen stuff (snow, in other words) in the mountainous areas.  When the weatherman says “scattered showers”, this is what it looks like on the radar... 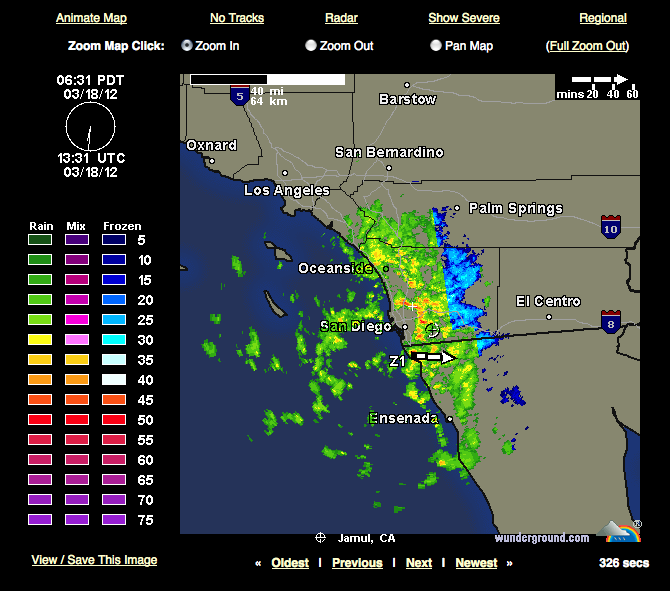 The image below is from my rain gauge, showing all the rain in the past few days (the time is GMT).  The most intense rain was near the end of the day on the 17th, which was in the early afternoon yesterday (PDT) – we got a half inch in a half hour, a veritable downpour in these parts... 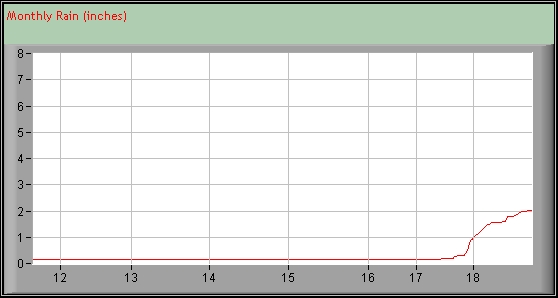 NASA released this video pieced together from footage shot on two shuttle missions.  The cameras are mounted at several points on the solid-fuel boosters, which broke away from the shuttle itself shortly into each flight, roughly 30 miles high.  The footage shows not only the “boost phase” (where the solid-fuel boosters are actually firing), but also the boosters' re-entry through the atmosphere and splashdown in the ocean.  There are two boosters on each launch, and often one can be seen in the other's camera as they tumble toward the earth together.

This particular video has been enhanced in two ways.  First, flight data (such as altitude and speed) has been superimposed on the video.  I found this data fascinating.  For example, you can see that the boosters arc up after detachment (carried by their inertia), then arc down, gain speed, and finally are slowed down as they re-enter the atmosphere.  Second, audio has been added in the studio.  I don't know where they got the audio from, but I thought it added a lot to the experience of watching the video.


The Jamul Indian Village has been working for many years to develop a gaming facility on our federal tribal trust land. This effort has not been without controversy. We are now creating a new vision for our gaming project, taking into account the concerns of our neighbors and the County of San Diego. Our newly designed project will create jobs for our neighbors, allow the tribe to become self-sufficient, and enable us to share gaming revenue with local governments and charities. We believe this can be achieved while respecting the environment and our neighbors’ concerns.

Some of the most important changes in our project’s design speak to its most pointed criticism. The total size of our gaming project has been cut by more than half from our proposal in 2006 – and this includes eliminating a proposed hotel. Building height of the gaming facility will now be reduced to 45 feet above grade as seen from Highway 94. This allows us to strategically use the contours of our land to provide parking below street level and outside the line of sight. These critical changes reduce the overall footprint of our project and, as a result, the oak and willow-studded stream traversing our reservation will be maintained in its natural condition.

The visual impact of our facility will be largely mitigated by its careful design. The earth-tone colors and natural materials of the exterior reduce the project’s visual impact by matching it to the background of the surrounding area. We will adhere to the county’s dark sky and sign ordinances. We will use native plants and the natural terrain to further limit views from roadways. This will not be a glitzy Las Vegas-style gaming facility with lights and signs. The project will be subject to a vigorous environmental process meeting state and federal standards.

This project will enable our tribe to be a greater asset to our community by generating revenue-sharing dollars for public safety, education, traffic mitigation and critical government services. The Jamul tribe has lived here for a very long time and has been recognized by federal officials since the 19th century. We only occupy a fraction of our ancestral lands and we have a responsibility to our members to seek the most effective economic development of this land for our future financial viability and cultural legacy.

We examined other economic development opportunities in the past. However, Indian gaming has proved to be the most successful means for federally recognized tribes to achieve self-sufficiency. Although Jamul Indian Village is eligible to receive federal money, our gaming project has not been funded with federal funds.

For federally recognized tribes such as ours, the proven path to achieve economic self-sufficiency has been Indian gaming. The Jamul Indian Village has had a gaming compact with the state since 1999. Our compact allows gaming of limited size and scope and only with a comprehensive regulatory system requiring state, federal and tribal participation. Our compact has been formally approved by the U.S. Department of Interior. Now we are working to create a gaming facility that will adapt naturally into our environment and community.

We will soon release our initial proposed plan. At that time we will also seek additional community feedback before finalizing these plans. We hope that our neighbors in the Jamul and Dulzura areas will recognize that we are genuine in our effort to accommodate our neighbors’ input. We have, in fact, made significant changes in our development plan in response to many of the objections that have been raised in the past. Our new vision for the Jamul gaming project embodies a smaller, high-quality facility that is respectful of our neighbors, our environment and the culture of the Jamul Indian Village. We are hopeful that our neighbors can come closer to supporting our new vision.