On diamond drill bits...  Well, technically they're hole saws, but I'm using them as if they're drill bits.  One of the characteristics of these diamond bits is that they wear out pretty quickly on hard substances (like the porcelain tiles in our bathroom).  I've been getting 8 - 10 holes from each drill bit, and they're about $15 each – so it's costing me over 50 cents in tooling for each hole.  That's not something a homeowner generally has to worry about with drill bits :)

I got to wondering exactly how these bits were made, and what they look like close up, so I stuck a used one under the microscope.  This one still has some life in it.  In the left hand photo (about 15x) you can see the composite of metal and diamond chips that make up the working surface.  The white “frosting” is dried porcelain tile powder from the last time I used it.  When drilling, I keep the bit wet, so the ground off porcelain forms a kind of slurry or mud that sticks to the drill bit, then dries very hard.  The diamond chips are transparent, and pale yellow or green in color.  I have no idea what kind of metal they're embedded in.  The right hand photo is centered at the same spot, but I zoomed it to 60x; in it you have a clearer view of just those chips.

I couldn't see any of this with just my eyeball.  With my fingernail I can readily feel that the surface is rough, but to my eye it just looks like a matte-finished metal surface.  It's very different when magnified! 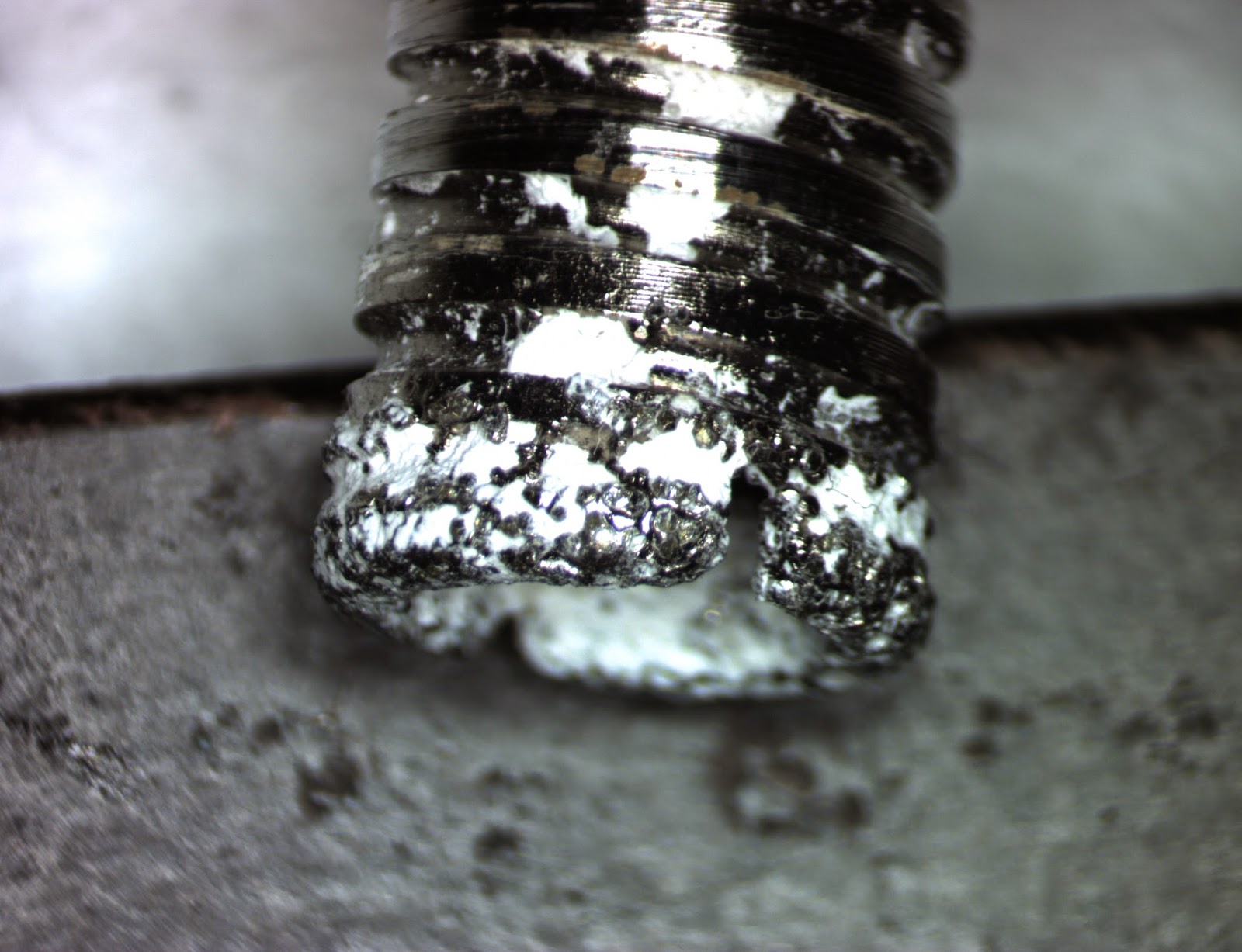 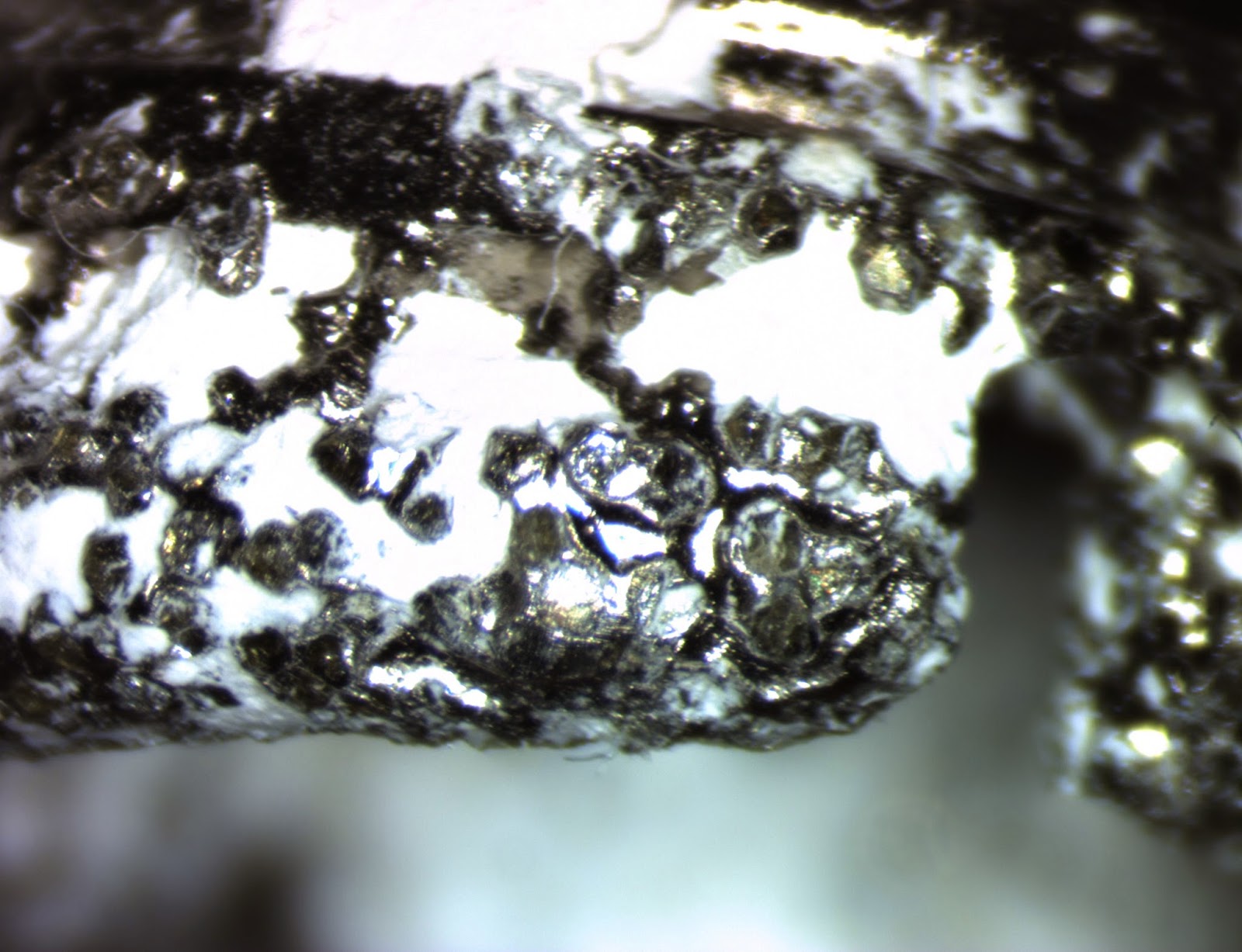 Posted by Unknown at (permalink) 4:48 PM No comments:

Progress report...  The barn builders haven't been here this week, darn it.  They're off on another job down in Ogden.  I'm not sure when they're coming back, but hopefully tomorrow.  Sheathing the interior and putting siding on the exterior are the next steps.  Also installing the electrical service and the heating boiler, along with toilet, sinks, etc.

The roofers skipped a couple days because the head demolisher was sick.  They were back today and demolished another quarter or so of our home's old roof; they're just over half done with that now.

I've been busy as heck, installing ceiling fans, fixing electrical problems, and (most recently) installing blinds.  Prior to this morning, the only privacy in our bedroom was provided by the thick foliage on the trees and shrubs outside.  In the past week, basically all the leaves of deciduous trees fell off.  Not wanting to frighten all the local young women, I thought it would be a good idea to get those blinds up.  As of this afternoon, we've got blinds on all the bedroom windows, plus the bathroom window.  The latter was a real pain to put up, as I had to drill four holes through the porcelain tiles lining the window casing, and I had to drill them up, as the blinds mounted on the top.  My arms hurt :)  But I got it done...

The last ceiling fan I just finished yesterday morning.  It was far more challenging than I had expected, mainly because someone (presumably the previous owner) had seriously botched the installation of the one I was replacing.  The old ceiling fan was mounted to a blue plastic junction box, which in turn was held in place by two nails into a joist – not even close to being strong enough to hold up the fan.  The previous owner “solved” this problem by putting six large sheet metal screws into the sheet rock on the ceiling.  Ack!  That fan was right over their bed, too – totally unacceptable.  So I had to get rid of all the old bad installation, patch the screw holes, repaint that part of the ceiling, install a new metal junction box (working in a 5" diameter hole!), and only then could I install the new fan.  I was very glad to finish that one, I don't mind saying!

One nice thing about the old ceiling fans: all four of them have new homes.  One of our neighbors lives in an older house, and they're always looking for ways to upgrade.  They took the three nicest fans to replace two not-so-nice ones they have now, plus add one to their workshop.  The fourth old fan has a much more interesting future ahead of it: one of this blog's readers (“eg”) inquired about getting just the motor from it – to make it into a potter's wheel!  That particular fan had a kind of cheesy looking fake brass exterior, and I was just going to toss it.  How great that someone can use the one part that looks good on it!
Posted by Unknown at (permalink) 4:34 PM No comments:

Why dogs kick when you scratch their belly...

Why dogs kick when you scratch their belly...  The things I never new before!
Posted by Unknown at (permalink) 7:12 AM No comments:

A great intro to calculus...

A great intro to calculus ... by someone who taught himself through online materials.  It's a perspective I appreciate :)
Posted by Unknown at (permalink) 7:10 AM No comments:

24 things they should have taught me in school...

24 things they should have taught me in school...  The GIF at right shows how camouflage paint is applied to a helmet.  All 24 here...
Posted by Unknown at (permalink) 7:08 AM No comments: