From my cousin Mike:

A priest, a Pentecostal preacher and a Rabbi all served as chaplains to the students of the University of Alabama in Tuscaloosa . They would get together two or three times a week for coffee and to talk shop. One day, someone made the comment that preaching to people isn't really all that hard. A real challenge would be to preach to a bear. One thing led to another and they decided to do an experiment. They would all go up to the Smokies, find a bear, preach to it, and attempt to convert it.

Seven days later, they're all together to discuss the experience.

Father Flannery, who has his arm in a sling, is on crutches, and has various bandages on his body and limbs, went first. 'Well,' he said, 'I went into the woods to find me a bear. And when I found him I began to read to him from the Catechism. Well, that bear wanted nothing to do with me and began to slap me around. So, I quickly grabbed my holy water, sprinkled him and, Holy Mary Mother of God, he became as gentle as a lamb. The bishop is coming out next week to give him first communion and confirmation.'

Reverend Billy Bob spoke next. He was in a wheelchair, with an arm and both legs in casts, and an IV drip. In his best fire and brimstone oratory he claimed, 'WELL brothers, you KNOW that WE don't sprinkle! I went out and I FOUND me a bear. And then I began to read to my bear from God's HOLY WORD! But that bear wanted nothing to do with me. So I took HOLD of him and we began to wrestle. We wrestled down one hill, UP another and DOWN another until we came to a creek. So right quick-like, I DUNKED him and BAPTIZED his hairy soul. And just like you said, he became as gentle as a lamb. We spent the rest of the day praising Jesus.'

They both looked down at the rabbi, who was lying in a hospital bed. He was in a body cast and traction with IV's and monitors running in and out of him. He was in bad shape. The rabbi looks up and says, 'Looking back on it, circumcision may not have been the best way to start.' 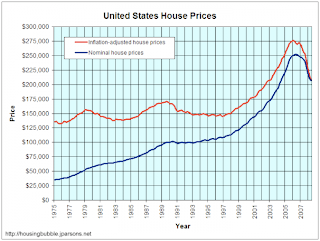 I've been looking for this data for months, and finally found a good source: the Bubble Meter blog, whose author also created and publishes this graph on his web site.

The red line (inflation-adjusted home prices) is the one to pay attention to. That line clearly shows the onset of the housing bubble around 2001. This happens to be exactly when the financial industry (urged by Congress) figured out how to package dog turds (the high-risk home loans to unqualified buyers) as gold-plated AA-rated securities. These securities were then purchased by normally-sane investors, who were for some reason willing to believe the computer models rather than their own sense of smell.

Anyway, there are a couple of things I take away from this chart. First one: here in San Diego County, we wish those were the averag home prices! Ours are roughly double what this chart shows. Second, the long-term inflation-adjusted home price seems to waver right around $150,000 with a slight increasing trend. If you imagine the housing bubble never happened, and you extrapolate that trend, then home prices right now “should” be around $175,000, plus or minus $25,000 or so. This suggests there's still some more price decline to go.

Oh, and one more thing: if you bought your home more than about 10 years ago, your home's value still has gained more than the historical average. Even if you purchased as recently as 5 years ago, most likely you're still breaking even. The sky hasn't fallen just yet...
Posted by Unknown at (permalink) 7:04 AM No comments: 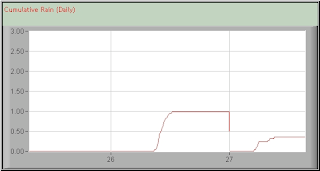 The rainfall yesterday was one inch, and we got four tenths of an inch today. It's not raining now, but it's still stormy looking outside. The forecast calls for slight chance of rain through 1 PM today, then clear for at least five days.

I took a little “inspection tour” of our yard this morning – the wet soil goes down at least six inches even in the hard-packed areas, and over a foot where it's softer.

No more fires, it's delightfully cool, and the dust will be greatly reduced for a while.

I love this time of year!
Posted by Unknown at (permalink) 6:55 AM No comments: