From the one and only Michael Barone:


I cannot imagine that Congressmen Nye, Perriello, Connally and Boucher have not already accessed the websites which have shown the position of their constituents in a contest which, while like all governorship contests has its own specific features, was also in its contrast on issue positions reasonably congruent with those prevailing on national issues. And I can certainly respond with sympathy if any or all of these incumbents responded to these numbers with a two-word comment of which I will relay only the first word which is, “Oh.”

I haven't felt this good about the political state-of-play for a couple years...
Posted by Unknown at (permalink) 4:22 PM No comments: 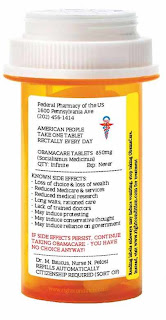 Via my lovely wife.  Click to enlarge, and read the fine print...
Posted by Unknown at (permalink) 4:01 AM No comments:

The Republicans took the New Jersey governor's race.  That's kind of like a Southern Baptist minister running for pope, and winning.  The fix was in on this race, and the Republican (Christie) won anyway.

I'm going to guess that the usual New Jersey Democratic shenanigans were worth 5 to 10 points in the election.  Christie won over Corzine by 49% to 45% according to the official results – so I'd guess that if that election could somehow have been held fairly, the results would have been something between 52/43 and 54/40.  Those are big margins considering the context.  Corzine was an incumbent Democrat, well-supported by the DNC (not to mention personally by Obama and Biden), very wealthy and free with his own money in the campaign.  As of late October, the Corzine campaign had spent a whopping $28m.  On top of all that, Corzine had the full-throated support of New Jersey's legendary “machine” – from thugs to dirty tricks, all was available to him.  Christie, on the other hand, was a relative unknown.  He'd been a U.S. Attorney, a Freeholder (a local NJ political position), and a private lawyer.  He got modest backing from the RNC, no big-name personal visits, and as of late October his campaign had spent just over a quarter of what Corzine spent: about $8m.

You can bet on this: every incumbent Democrat is looking at these results and is reconsidering their commitment to the Obama/Reid/Pelosi wing.  I'm not saying that every one of them is going to change their behavior – but I am saying that a lot of them will.  These results – not just in New Jersey, but in all the off-year elections yesterday – are just too clear to ignore.  Only the most ideologically driven politico will bull ahead without thinking this through.

By the way, the news wasn't all rosy from New Jersey.  I went through all the results, and except for the governor's race, it is all business-as-usual.  The Virginia races were quite different: the Republicans took virtually every contested seat there.  Every incumbent New Jerseyian who ran won their race, and no seat changed party affiliation.  So Christie is walking into a lion's den of rapacious machine politicians – most of whom have every reason to feel completely secure.

But still I have a smile on my face.  The voters, bless their pointed little heads, sent a message last night that I believe will have immediate impact.  Watch what happens with the healthcare bill this week.  Pelosi promised a vote on Thursday (tomorrow!).  My bet is that it gets delayed, probably until next year.  Reid is already signaling that the Senate bill will be delayed to January at the earliest.  After last night, Pelosi and Reid are going to have much more trouble getting votes for that beast from their own party, much less the Republicans...
Posted by Unknown at (permalink) 3:59 AM No comments: