Quotes from the Great Communicator... 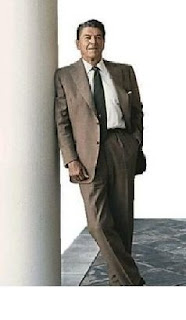 My cousin Mike D. reminds me of these Reagan gems:


Here's my strategy on the Cold War:We win, they lose.

The most terrifying words in the English language are: I'm from the government and I'm here to help.

The trouble with our liberal friends is not that they're ignorant; it's just that they know so much that isn't so.

Of the four wars in my lifetime, none came about because the  U.S. was too strong.

I have wondered at times about what the Ten Commandments would have looked like if Moses had run them through the U.S. Congress.

The taxpayer: That's someone who works for the federal government but doesn't have to take the civil service examination.

Government is like a baby: An alimentary canal with a big appetite at one end and no sense of responsibility at the other.

The nearest thing to eternal life we will ever see on this earth is a government program.

It has been said that politics is the second oldest profession. I have learned that it bears a striking resemblance to the first.

Government's view of the economy could be summed up in a few short phrases: If it moves, tax it. If it keeps moving, regulate it. And if it stops moving, subsidize it.

Politics is not a bad profession. If you succeed, there are many rewards; if you disgrace yourself, you can always write a book.

No arsenal, or no weapon in the arsenals of the world, is as formidable as the will and moral courage of free men and women.

Where's that kind of leadership today, when we need it so badly?

The closest I've seen is Sarah Palin and Fred Thompson, and, sad to say, they're not that close...
Posted by Unknown at (permalink) 4:23 AM No comments:

The chart to the right (click to enlarge) is today's Google Unemployment Index, since 1/1/08.  It just reached an all-time high, which corresponds roughly with the recently announced high in the government's unemployment index (10.2%).

This is a tally of queries for subjects related to unemployment.  More importantly, it is unfiltered and unvarnished, unlike the government's figures.

No good news for job seekers yet...
Posted by Unknown at (permalink) 4:13 AM No comments: