Paradise ponders, electric walnut edition...  Yesterday was a day of getting things done, for me.  That was very satisfying, I'll tell you.

First thing in the morning, I went to work on the threshold between the mud room and our entranceway, which I've mentioned before.  I figured it would likely take me all day to get this right.  I had envisioned building it as three separate pieces of walnut: one on the bottom, matching the tile line in the mud room, a second on the bottom matching the tile line in the entranceway, and one on top that was shaped so that you didn't stumble on it, but which was tall enough to engage the weatherstripping “sweep” on the bottom of the door.  The first photo below shows the hole I was filling along with the three pieces of wood I cut; mud room on the left, entranceway on the right.  The second photo shows all three pieces of wood assembled in place, but not yet glued.  The third photo is the same, but with the top piece removed.  Next to last photo shows all the pieces in place and glued, and the last photo the same but with two coats of Watco natural penetrating oil finish.  Amazingly enough, it all worked on the first try.  It looks great, and seals the door very nicely.  We care about a seal here because we know the mud room will always be cooler in the winter: it's a small volume with all but one side exposed to the elements.  The only hitch I ran into during this work was that some of the mastic from both tile installations had to be chiseled out (hence the hammer and cold chisel visible in some of the photos).  I was all done by 10:30 am! 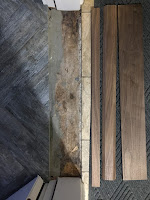 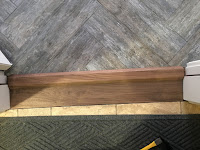 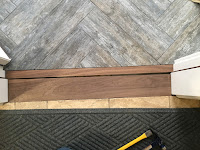 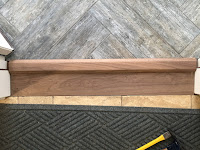 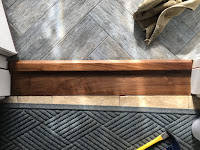 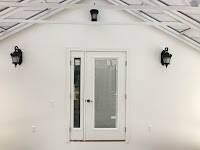 The weather outside was frightful, so I went to work on some interior electrical work that had remained unfinished.  First up: the sun room (photo of finished work at right).  I installed the three lights on the one solid wall.  That went without a hitch, except for the minor problem of figuring out how to get a ladder in there.  The only other thing left to do was the covers for the switches and outlets, and now they're all in.  Last night we tried the lights after dark, and they work great: lots of nice, even light throughout the sun room. 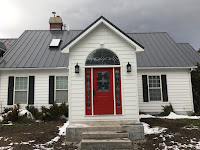 I still had most of my afternoon left after I finished this.  The temperature outside had risen to a balmy 38°F, and the forecast had this being the warmest day for at least ten days (and maybe all winter, for all I know), so I bit the proverbial bullet and decided to put up the lights on the mudroom exterior (photo of finished work at left).  My fingers are full of dry-weather cracks, made worse by both my Raynaud's disease and my pernicious anemia, so working out in dry, cold weather was ... unpleasant.  I got them both up, though, along with the motion sensor (just visible at the top of the arch).  I had a small challenge with the last step, mounting the motion sensor: the cover of the electrical box was missing its bolts, and nothing in my collection of bolts would fit.  I made a quick run to our local hardware store and bought 4 pairs of bolts: one pair for each of the weird sizes that it might possibly be.  It turned out to be 10-32 bolts that were needed, the last one that I tried.  Of course!  I couldn't test these lights, as I still have some interior wiring to do.  I expect to be working on that today. 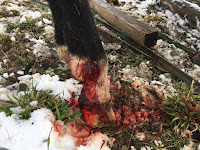 By the time I'd finished with all this, it was about 3 pm and starting to get dark.  Earlier in the day, on one of my million or so trips to the barn for parts and tools, I noticed a 24 year old mare (Sally) belonging to one of our neighbors (Nick and Maria S.) standing in the corner of another neighbor's field right near my barn.  I went over to say hello, and noticed that its right rear ankle was bloodied.  I texted the owners, along with Tim (the field's owner) to let them know, including the photo at right.  All of them were in church, though, and weren't looking at their phone.  Just as I sat down for a rest, Debbie looked over to see her being harassed and bitten by Tim's two geldings (who are much larger than Sally).  They actually knocked Sally off her feet.  So up and out I went, to see if I could lead Tim's horses away and into another paddock.  Just as I got out there, everybody got out of church and called us.  Within a few minutes, we had Nick, Maria, four of their kids, Tim, his wife Jeannie, and I out there with the horses.  Tim has been around horses all his life, and immediately knew what was going on: Sally was coming into heat.  I hadn't noticed any of the signs, but later I did see them (raised tail and winking vulva).  His geldings, despite missing some parts one might think would be essential, were very excited; the larger one had probably kicked Sally, and hence the cut.  The wound got examined thoroughly and appeared to be a shallow cut above the hocks, so not serious so long as its allowed to heal.  A thorough washing was prescribed, along with possible veterinary treatment if the cut turned out to be deeper than it appeared, and Sally was led off to be in her own paddock.  I had two roles in this little animal drama: sounding the alarm (which I'm glad I was able to do!) and holding the lead while Tim and Nick examined the ankle.  This morning we saw Sally in her own little paddock, looking a little lonely but physically ok.
Posted by Unknown at (permalink) 9:02 AM No comments: