Paradise ponders...  Well, yesterday certainly didn't turn out as I expected!  Just a few minutes after I started working on the paperwork I've been trying to get done for days now, Jim J. (my contractor) showed up with the local sales rep for the door company he favors (Therma-Tru).  This construction project requires four new doors for our house, two entry and two interior (we thought).  It turns out that for three of the four doors, we need unusual configurations that will require custom construction.

I never thought too much about doors before this project, but I sure have learned a lot recently!  The only “normal” door we're putting in is the new entry door into the mud room we're building.  That's going to be a door straight out of the catalog, with sidelights and a “transom” (an arched glass panel above the door).  The sales rep looked very relieved when we got to this door, as we weren't asking for anything odd :)

The new door between the mud room and our existing entryway you might think would be a normal door.  It's interior, and there will be tiled floor on both sides of it.  All we'd need is a pre-hung door and a T-strip as a transition between the two kinds of tile, right?  Of course not!  Why?  Because we picked a door with glass in it – and that door is only available in an entry door model.  Pre-hung entry doors have jambs along the bottom – not what you want in an interior door at all!  After considerable discussion of the options, the sales rep figured out a way to do what we want.  We'll end up with a pre-hung entry door – but the jamb will be left off altogether (which is fine!), there will be no kerf for weather-stripping, and the bottom of the door will have a sweep.  Great!  But that took considerable discussion to arrange.

Between our kitchen and the new deck we wanted a double French door that opens out onto the deck, and vented side-lights that opened in.  This is an entry door, but there will be a roof over the deck so the door isn't really exposed to the elements at all.  The deck will be exactly the same height as our kitchen floor, so we really didn't want a jamb there – we want a transition between tile and deck that's (ideally) level with them both.  Furthermore, the standard build for such a door has the doors opening in the same direction as the side-lights – whereas we want them opening in opposite directions.  Once again, that took a bunch of discussion between the sales rep, Jim, and myself to get it all right.  But we did!  We're going to end up with exactly what we want there.

The last door we need is to go between our bedroom and the new sun room.  This is, technically, and interior door (the sun room's interior is completely weatherproof).  However, once again we wanted features that's only available on entry doors: internal blinds inside the double-pane windows, and vented side-lights.  The sun room's floor will be slightly below the level of the bedroom floor, so an entry door jamb is just fine there.  We made the sales rep happy when we told him that we wanted both the vents and the door to open in.  But ... we didn't have exact dimensions for the rough door opening – but it appeared to be non-standard and small.  Jim ripped off some of the siding next to the door so he could see and measure it – and he discovered that the rough opening is 60" wide.  That's about 4" less than what you'd expect for a standard door size – and it means we're likely going to end up with a 32" door (instead of the 36" we'd prefer), and 10" side-lights.  It's even possible that we'll have to go with a 30" door.  The sales rep is checking with the factory to see what they can fit in that hole.

When the Therma-Tru sales rep left, the concrete crew was getting ready for the two loads of concrete to arrive.  In a few minutes the trucks showed up, and things got really busy! The long chutes on the concrete trucks could reach everywhere they needed to place concrete for the mud room and the sun room foundations, so those two went very quickly.  The deck foundation and air conditioner compressor pad in the back yard were another story, though.  There's no way for a concrete truck to get back there, and the small amount of concrete needed (around a cubic yard) made a concrete pump impractical.  Jim's initial thought was to wheelbarrow the concrete back, loading up the wheelbarrow from the concrete truck on our driveway.  Then he had a better idea: use the big loader they used for all the digging.  It's bucket holds about a half yard of concrete, so they'd only need a couple of loads.  That worked great, with a couple of young, strong lads shoveling the concrete out of the bucket.

In the last three photos below you can see the result, after they stripped the forms off this morning.  We has foundations!  The concrete needs to cure for a few days, then the crew will be backfilling, leveling, etc.  Our yard should look a bit less like a war zone once that's done :) 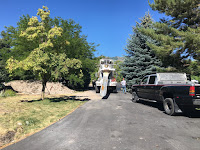 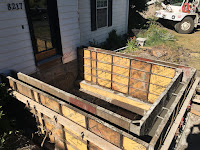 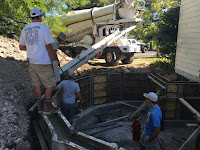 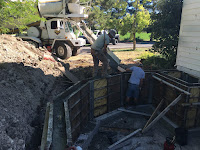 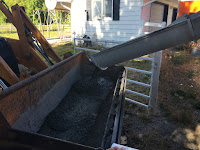 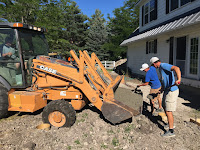 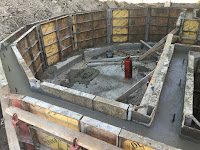 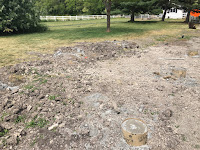 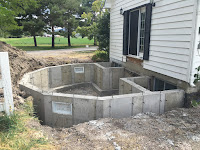 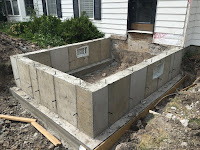 Posted by Unknown at (permalink) 3:40 PM No comments: