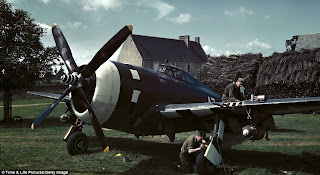 From the London Daily Mail.  Interesting how these are emerging after all these years...
Posted by Unknown at (permalink) 1:32 PM No comments:

Andrew Breitbart, railing at the “Occupy CPAC” protesters this past weekend:


Seems to me that we could use a few more angry political observers...
Posted by Unknown at (permalink) 1:28 PM No comments:

First time I've heard this line, from a song by Felix Leclerc:


“The best way to kill a man is to pay him for doing nothing.”


I found it in this video:

Posted by Unknown at (permalink) 1:08 PM No comments:

Collect GPS data from 10,000 taxi rides in New York City, over the course of 24 hours.  Then turn them into a movie, and here's what you get:

There was a time, not so very long ago, when this announcement would have greatly upset me.  Starting in my teens and up to 10 or so years ago, I made extensive use of libraries – school libraries, municipal libraries, specialized libraries, military libraries, and university libraries.  This funding cut primarily affects the municipal (and associated regional) libraries.

Before the advent of the Internet, municipal libraries were the only access many people had to much fiction and nearly all reference material.  This was certainly true for me.  Today, that is no longer true – a vast amount of fiction (most especially through open source outfits like Project Gutenberg), and the reference material (especially technical and scientific) is superior and more timely than what any library could provide.  It's still true today (though I suspect for not much longer) that some libraries can still provide more depth in reference material – but this depth is found mainly in university and specialized libraries.

The last time I visited a municipal library was about 8 years ago.  I was, frankly, appalled by what I found.  The publicly available collections were dominated by pop music CDs, recent movie DVDs, and popular paperback books (including quite a number of bodice-rippers, soft pornography, and other such trash).  And animals.  You want to play with a bunny rabbit?  Check it out of our library.  The reference collection was smaller than my collection at home.  The hardback fiction collection was heavily slanted toward books written in the past ten years.  It was very sad...

I went to the library seeking detailed information on earthquake faults in San Diego County; a librarian advised me to go to the UCSD library (which I did), as it would take months for them to borrow the books I was after – if it could be done at all.

So I'm not worried by this funding cut.  In fact, I think it is probably a good thing.  Considering how our municipal libraries are wasting the funding they do get, I think I'd be happiest if they didn't get any at all.

I can hardly believe I'm saying that, being the bookworm that I am, but there it is...
Posted by Unknown at (permalink) 6:38 AM No comments:

Iron Giant Comes Back to Life... 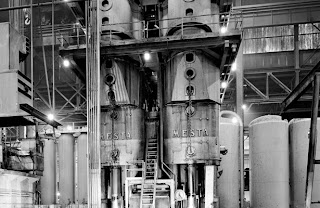 The Atlantic has a great article on Alcoa's 50,000 ton forging press, recently refurbished.

I was fascinated to read that in the '50s, the U.S. ordered the construction of massive forges (the Heavy Press Program), basically out of fear that the Soviet Union had an industrial advantage over us.  U.S. taxpayers funded 10 of these monsters, of which this 50,000 ton press was one.  I'd never heard about this program before!
Posted by Unknown at (permalink) 6:18 AM No comments:

Politics can be Ugly...

Under pressure from the Obama administration, St. Paul withdrew from a case they believed they could win at the U.S. Supreme Court.  Today's Wall Street Journal has an article about it.  The case is most likely too complex to be useful in the campaign, but it's quite telling to anyone paying attention.  The WSJ's conclusion:


St. Paul released a statement Friday saying it "likely would have won" at the Supreme Court but that "such a result could completely eliminate 'disparate impact' civil rights enforcement, including under the Fair Housing Act and the Equal Credit Opportunity Act. This would undercut important and necessary civil rights cases throughout the nation. The risk of such an unfortunate outcome is the primary reason the city has asked the Supreme Court to dismiss the petition."

To sum up: St. Paul has spent taxpayer money for almost a decade fighting a case to force slumlords to provide the poor—including minorities—with better housing. But just as it was on the cusp of what it claims would have been a victory at the Supreme Court, the city withdrew its appeal under pressure from the Obama Administration and liberals who feared they might lose a weapon of dubious legality that they want to use to tell banks how and to whom to lend.

It's enough to recall the old joke that liberals love the poor in theory—it's the actual poor they have a problem with.

Since returning from my travels last week, I've been fighting off some evil rhinovirus.  I've got all the usual symptoms of a really bad cold, including (most especially) being thoroughly congested.

Being as ancient as I am, this is far from the first time I've had such a cold.  In the past I've used decongestants with great success.  But this time they weren't doing a thing.  My lovely bride suggested that I do a little research yesterday into decongestants, and then she'd pop down to the drug store and get me some of whatever works best.

My starting point was the medication I had been taking.  It's active ingredient was phenylephrine, which I quickly discovered was rather notoriously ineffective compared to the traditional decongestant pseudoephidrine.  So why would they have switched to a less-effective ingredient?  Because many states have passed laws banning or restricting the sale of over-the-counter pseudoephridrine – because the drug lords discovered an easy way to make methamphetamines by using pseudoephidrine.  These criminals go buy huge quantities of cold medicine and convert it to methamphetamines.

Yet another way the drug wars are impacting my life!  This problem only exists because methamphetamines are illegal...

In California, sales of pseudoephidrine are controlled – an individual can buy small quantities only.  That means that you can't just go pull it off the shelf like any other cold medication – you have to ask the pharmacist for it.  My lovely bride did just that, and also picked me up a couple boxes of those wonderful tissues with lotions embedded, so your nose doesn't get rubbed raw.

Last night I took the first round of pseudoephidrine.  Result: in less than a half hour, I could breath easily through my nose for the first time in several days.  Ah, what a relief!  And those tissues...sheer heaven on my nose...

There was one downside for me, though: my personal reaction to pseudoephidrine is that it keeps me wide awake.  I got not a wink of sleep last night.  But I feel much, much better this morning – not least because I can once again breathe freely...
Posted by Unknown at (permalink) 6:05 AM No comments:

Rick Perry has a column in today's Wall Street Journal.  An excerpt:


It seems unimaginable, yet President Obama refused Trans-Canada's request to run its pipeline across the border from Canada to the Texas Gulf Coast. This extensive pipeline holds the potential of moving up to 830,000 barrels of crude oil per day—including oil produced in North Dakota and Montana—to refineries here in Texas. Translated into job numbers, that's up to 20,000 direct jobs and estimates of up to hundreds of thousands of indirect jobs created by this $7 billion project.

Keystone would have provided a shot in the arm for our nation's uncertain economy, and it could have provided economic opportunity for tens of thousands of families, stretching from here in Texas all the way to the Canadian border.
Hoping to appease environmental radicals, President Obama said no, claiming he didn't have time to adequately consider the pipeline.

This is despite the fact the original request was made in September 2008, and Keystone was the subject of dozens of meetings on multiple levels of his own administration, as well as exhaustive environmental impact reviews. Certainly, three-and-half years is more than enough time to make a decision.

His reasoning becomes even more laughable when you put it up against his massive, ill-conceived so-called stimulus bill, which he muscled through Congress and signed within the first month of his presidency.

It seems to me that this decision by Obama should provide excellent fodder for the campaign this fall...
Posted by Unknown at (permalink) 5:45 AM No comments:

Recent events in Greece sound like an implausible Hollywood plot: citizens riot because the government is reducing their welfare.  That's not how they see it, of course – but it is an accurate description of what's happening there now...

For over a decade, the Greeks have been living well beyond their income.  The government has been borrowing easy money (mainly from other EU members) and using it to fund an amazing panoply of benefits for their citizens.  Naturally, the citizens supported these politicians raining money down upon them.  In that ten years, the Greeks have become quite thoroughly addicted to these benefits, to the point where they appear to have completely taken leave of their senses.  Despite the rather simple math involved (you can't continue to spend $5,000 a month if you only make $3,000 a month!), the Greeks riot to keep up the party.  Their unemployment rate is 21% (why work, with such great unemployment benefits?) and over 40% of the entire workforce works for the government.  It's a thoroughly socialist state.

There are many parallels in the U.S., though thankfully not (yet) so extreme.  Our Social Security system is completely broken and indefensible from any rational perspective, yet it still has overwhelming public support.  The biggest fear I have about Obamacare is that once the benefits kick in (starting next year!), it will prove politically impossible to repeal it – that's very much what's happening Greece right now.

Our elections this fall are, I think, our last good chance to steer the U.S. away from the disastrous course that most of Europe is on.  By this I mean that it's still politically possible at this point to execute a “course correction”.  In four more years, if Obama wins reelection, that will be vastly more difficult to pull off...
Posted by Unknown at (permalink) 5:41 AM No comments: