A Kansas farm wife called the local phone company to report her telephone failed to ring when her friends called - and that on the few occasions, when it did ring, her dog always moaned right before the phone rang.

1 . The dog was tied to the telephone system's ground wire with a steel chain and collar.

2. The wire connection to the ground rod was loose.

3. The dog was receiving 90 volts of signaling current when the number was called.

4. After a couple of jolts, the dog would start moaning and then urinate.

5. The wet ground would complete the circuit, thus causing the phone to ring.

Which demonstrates that some problems CAN be fixed by pissing and moaning. Thought you'd like to know.


Those cups of coffee that you drink every day to keep alert appear to have an extra perk -- especially if you're an older adult. A recent study monitoring the memory and thinking processes of people older than 65 found that all those with higher blood caffeine levels avoided the onset of Alzheimer's disease in the two-to-four years of study follow-up. Moreover, coffee appeared to be the major or only source of caffeine for these individuals.

A snide remark involving my parents (both of whom drink caffeinated beverages daily) comes right to mind. But I'll restrain myself, as my mom reads this blog. When she can remember, that is...
Posted by Unknown at (permalink) 4:33 AM No comments:

Wyoming Senator Alan Simpson once famously called senior citizens the “Greediest Generation”, comparing Social Security to a milk cow with 310 million teats.  This didn't sit well with a citizen from neighboring Montana, who wrote this letter:

1. As a career politician, you have been on the public dole for FIFTY YEARS.

3 My Social Security payments, and those of millions of other Americans, were safely tucked away in an interest bearing account for decades until you political pukes decided to raid the account and give OUR money to a bunch of zero ambition losers in return for votes, thus bankrupting the system and turning Social Security into a Ponzi scheme that would have made Bernie Madoff proud.

5. I, and millions of other Americans, have been paying into Medicare from Day One, and now you morons propose to change the rules of the game. Why? Because you idiots mismanaged other parts of the economy to such an extent that you need to steal money from Medicare to pay the bills.

6. I, and millions of other Americans, have been paying income taxes our entire lives, and now you propose to increase our taxes yet again. Why? Because you incompetent bastards spent our money so profligately that you just kept on spending even after you ran out of money. Now, you come to the American taxpayers and say you need more to pay off YOUR debt.

To add insult to injury, you label us "greedy" for calling "bullshit" on your incompetence. Well, Captain Bullshit, I have a few questions for YOU.

1. How much money have you earned from the American taxpayers during your pathetic 50-year political career?

2. At what age did you retire from your pathetic political career, and how much are you receiving in annual retirement benefits from the American taxpayers?

3. How much do you pay for YOUR government provided health insurance?

4. What cuts in YOUR retirement and healthcare benefits are you proposing in your disgusting deficit reduction proposal, or, as usual, have you exempted yourself and your political cronies?

It is you, Captain Bullshit, and your political co-conspirators called Congress who are the "greedy" ones. It is you and your fellow nutcases who have bankrupted America and stolen the American dream from millions of loyal, patriotic taxpayers. And for what? Votes. That's right, sir. You and yours have bankrupted America for the sole purpose of advancing your pathetic political careers. You know it, we know it, and you know that we know it. And you can take that to the bank, you miserable son of a bitch.

I sense that our Montana citizen is none too pleased with the senior Senator from Wyoming!
Posted by Unknown at (permalink) 4:29 AM No comments: 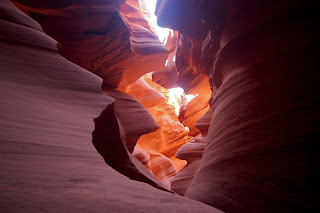 Antelope Canyon is a particularly beautiful example of a “slot canyon”, on Navajo land in north central Arizona.  You can only get to it with a special permit and a Navajo guide.

I've never been there, but after seeing these photos I'd sure like to!
Posted by Unknown at (permalink) 4:21 AM No comments: