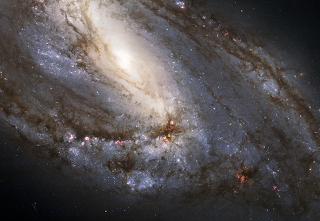 Hubble snaps a picture of one element within M66 (the “Leo Triplet”).  As usual, click to enlarge.

I can never decide whether Hubble's more important contribution is its excellent science data production, or its revelations of the beauty of the cosmos...
Posted by Unknown at (permalink) 4:15 AM No comments:

Posted by Unknown at (permalink) 4:04 AM No comments:

It's been 35 years since I made my last jump (my 424th), but I still remember the thrill.  High altitude jumps were my favorite, with the long freefall (up to 70 seconds when the pilot was willing to push the limits a bit).  The highest jump I ever made was from 18,000', with oxygen, from a U.S. Navy plane in the Philippine Islands.  I was doing it for fun, along for the ride with several SEALs who were practicing for real.

Felix Baumgartner is going to jump from 120,000', and will likely go supersonic.
Posted by Unknown at (permalink) 3:54 AM No comments:

Tales From the Front Yard...

This is the old-age, out-of-condition edition.  Debbie and I spent half the day yesterday working on our front yard.  We're cleaning up a small section (about 300 square feet) and planting it.

Our first step is to rip out some old flagstones, perhaps 30 of them.  Some of the flagstones are fairly large, up to 8 or 9 square feet.  All of them had been set in a thin layer of poor concrete, about one inch thick.  The largest ones approached 200 pounds; I could just barely lift them up to put them on a little two-wheeled truck.

After three hours of flagstone-lifting, we were beat – especially me.  This is the first hard physical work I've done this year, and my lack of condition really showed.  We have a nice pile of flagstones now, sitting up against a post – but we're only about half finished!  We spent another hour hoeing some weeds and grass off an embankment under a liquid amber tree, and laying down some pine-bark mulch.  Should make the tree happy!

By the time I got back into the house last night, I was sunburned and my muscles felt like quivering jello.  Everything hurt.  A nice warm shower felt oh-so-good.  When I got out of the shower, the smell of grilling steaks filled the air – Debbie was outside on the grill with two huge slabs of beef, and some potatoes were in the oven.  Sure tasted good after all that hard work!

This morning I don't feel quite so bad.  I think there are three, maybe four fingers that are pain-free.  One earlobe, too.  Everything else still hurts...
Posted by Unknown at (permalink) 3:38 AM No comments:

I have a condition that causes my extremities to feel much colder than conditions would warrant.  I'm not sure what triggers this, but occasionally it can be quite uncomfortable, especially for my feet.  Last night after I went to bed was one of those uncomfortable times, and I jokingly said to Debbie that I needed a hot water bottle.  We both remember these from our childhood, though I haven't seen one in a good many years.

A few minutes later, Debbie appeared, laughing, with a towel that she stuck under my feet.  It was warm, and it felt absolutely heavenly on my feet.  But it wasn't actually just a towel, it was a SnuggleSafe pet warmer – for several years now she's been warming up a few of these every night for our outside cats.  You nuke them in the microwave for a few minutes, and they stay warm all night.

Well, I can now attest to their effectiveness as a foot-warmer!  I think the manufacturer is missing a huge market opportunity &dnash; these things beat the pants off a hot water bottle because they stay warm so long.

If you're wondering how they work, they're filled with fairly exotic stuff called a “phase change material” – far more effective than water at storing heat.  The one that Debbie heated up for me last night was still warm when we got up this morning...
Posted by Unknown at (permalink) 3:26 AM No comments:

Miki (at right) is our youngest field spaniel, who's about four years old now.  He's a little short for a field spaniel, with a very sturdy appearance.  He has one ability that surprises everyone who takes his leash to walk him: he can pull with a force all out of proportion to his size.

I don't own a linear scale, so I can't measure it with precision – but I'm reasonably good at estimating weight.  My best guess is that he can pull with 75 to 80 pounds of force – not bad for a dog that weighs 40 pounds!

But there's more to his ability than just his pulling force: he can sustain that force over a long period with remarkable steadiness.  Once he's decided he wants to head in some direction, it is for all the world like a small tractor is pulling you along, slowly and steadily, in low gear.

On this morning's walk, I had a demonstration of exactly this.  Our nocturnal visitor had returned, and all three field spaniels were heading in exactly the same direction.  I had Lea and Moi's leashes in my left hand, and together they pulled with perhaps 50 pounds of force, intermittently.  Miki's leash was in my right hand, and he was pulling steadily with about 75 pounds of force – no perceptible variation at all.  Between the three of them I had quite a job staying on my feet!
Posted by Unknown at (permalink) 3:14 AM No comments: