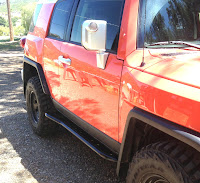 I've been looking forward to installing the rock rails (or “sliders”) on our FJ, as they're one of the things that change the appearance.  I got them on today, as you can see in the photos.  These are the All-Pro APEX “Extreme Duty” rock rails, which I selected based on the many positive reviews I found online. 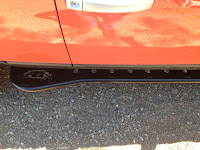 The folks at All-Pro have consistently been very helpful (perhaps taking pity on me, as they met me when I picked up my order).  This was especially so with the rock rail installation, as I quickly discovered this morning that the instructions didn't seem to match what parts I had.  With a couple of emails, the folks at All-Pro set me straight: the instructions were for their standard rock rails; the APEX rock rails are constructed slightly differently and have a simpler installation.  Once I got myself educated, installing the rails was a snap.  Each rail bolts directly to pre-existing threaded holes in the FJ's frame.  The bolt holes in the rock rails are elongated to provide a little “slop” in the alignment, but in my case none was needed – the fit was perfect.

If you're not familiar with rock rails, they are designed to protect the side of your vehicle should you bang the side into a rock.  This happens most often when your in a place where your vehicle is tilted sideways on rough or slippy-slidey ground.  In these circumstances it's very easy for your vehicle to move a foot or more to one side as you try to drive through the patch.  If there happens to be a bit rock (or wall) next to you, your vehicle might very well end up scraping against it.  I'd much rather scrape these tough, relatively inexpensive rock rails than the thing sheet metal of the body!
Posted by Unknown at (permalink) 1:36 PM No comments: 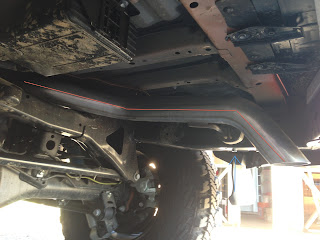 The stock FJ Cruiser tailpipe, for some unknown reason, dips down low in the back.  It's perfectly suited for getting snagged on something you just cleared on a rough road – a root, a boulder, etc.

All-Pro makes a replacement tailpipe, which I bought a couple of weeks ago and installed this morning.  It is routed entirely up high, and much straighter than the stock tailpipe.  The photo at right shows the new tailpipe installed (delineated by the red line I drew down its middle).  The shock mount hanger is hard to see, but one of its mounting bolts is pointed to by the blue arrow.

The connection between the muffler and the tailpipe is via a dual bolt flange, which made this job look like it would be super easy – just remove two bolts and the old tailpipe comes out.  But getting those two bolts loose was a major evolution, as they were very tightly in place.  One of them I managed to turn with a socket wrench, using both arms with everything I could put into it.  The second bolt I couldn't move with my arms at all.  I went through some gyrations to get an impact wrench to bear on it, but even that wouldn't budge the bolt!  In desperation, I put an 8" long box wrench on the bolt head, and used my boot to push the wrench using my legs – and that worked, though just barely.  Once I got it to turn an entire turn, then I could work it with my socket wrench.  What a pain!

Fortunately, the new one went in much more easily than the old one came out...
Posted by Unknown at (permalink) 1:21 PM No comments:

Evolution of Music, a Cappella...

I recognized everything up through the 1970s, and maybe half of the 1980s.  Everything after that was new to me (and didn't make my ears happy!).

When I was a teenager, I was astonished when my parents forbade me from playing Joni Mitchel or Simon & Garfunkel on our family's record player.  It was easier for me to understand why they didn't want to hear Crosby, Stills or Jimi Hendrix.  They must have felt then as I feel today listening to this music of the 2000s...

Posted by Unknown at (permalink) 5:53 AM No comments:

Makes Me Cry Every Time...

This is the third or fourth video of an Operation Smile patient I've seen.  I cry every time, just trying to imagine the joy brought by this life-changing procedure...

Posted by Unknown at (permalink) 5:45 AM No comments:

If you wring out a sopping-wet washcloth in zero gravity?  Watch:


On one level, this is a fascinating experiment and a great demonstration of one effect of gravity's absence.

On another level, it's a little sad that NASA has to resort to things like this in its efforts to justify the ISS.  It would be ever so much easier to justify if the ISS was producing exciting, useful, or surprising science results, instead of parlor tricks...
Posted by Unknown at (permalink) 5:43 AM No comments:

The brighter colors represent smaller numbers, the duller colors larger.  The heat map shows the number of digits in the product of x and y, as expressed in Roman numerals.

Figuring out why there are visual patterns to the result is left as an exercise for the reader.

Yes, this is the work of Nick Berry – who else would it be?
Posted by Unknown at (permalink) 5:01 AM No comments: