A Paradise resident I wish I'd been able to meet... A Paradise resident I wish I'd been able to meet...  Richard Rallison lived less than a mile from our house up until 2010, when he died near here in a paraglider accident.  He was an electrical engineer who ended up working mainly in holographic optics, playing a big part in the invention of holographic bar code scanners, heads-up displays for high-performance aircraft, and much more.  He had a very well-equipped optics lab in an 8,000 sq. ft. structure right next to his house – that would have been fun to explore!  I've heard about him from several people here in Paradise; he was a out-sized character in a community that's got more than its share of characters.  I'm sure I'd have enjoyed getting to know him.

If you're curious, there's much more on him here, here, and here...
Posted by Unknown at (permalink) 8:56 AM No comments:

Paradise ponders ... Christmas decorations edition...  Our house is starting to look downright Christmasy.  A little elf named Debbie has been hard at work, with a little help carrying boxes up from the basement.  At this point I think she's just about finished except for decorating our Christmas tree (more on that in a moment).  Here are some photos from around our house: 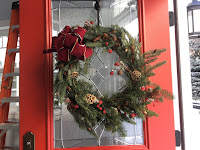 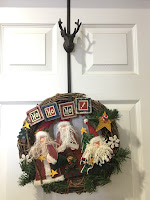 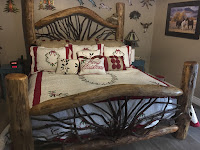 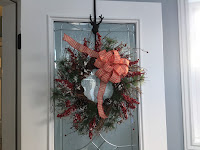 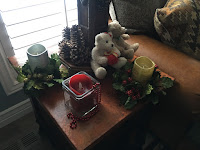 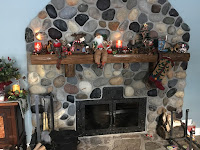 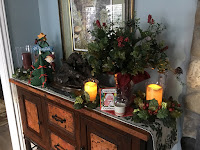 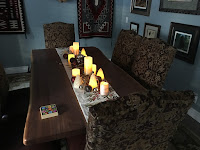 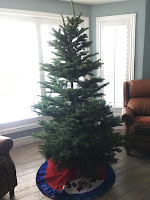 Those candles are not real – all of them are actually battery-powered LED lights.  Some that she bought this year have remote controls, which kind of boggles my mind – they're quite inexpensive, and yet they come with such a thing.  Electronics have gotten rather crazy cheap!  One particular type of candle (the red ones on the mantle) are much more realistic than the others – not only does the light's intensity vary on them, but there is actual motion that closely resembles the wavering flame of a candle.  There's a clever little mechanism powered magnetically that creates that effect.  My hat's off to whatever engineer dreamed up that solution – it's clever and very good.

The tree isn't decorated yet only because I made a discovery yesterday: randomly “twinkling” LED bulbs are now apparently available.  I've been looking for these for years now, hoping that eventually some manufacturer would step up to do it.  I found these online, and I don't know yet how well done they are.  I'll post about them when I do (allegedly we'll have them in hand by Wednesday).

My love of the twinkling bulbs stems from the incandescent twinkling bulbs we had on our Christmas tree when I was growing up.  I remember the year we got the two sets of these lights – my dad loved them when he saw them at Sears, and splurged on the two sets.  They were low-voltage lights, operated through a massive transformer, and for the day they were quite expensive.  Each bulb was roughly the size and shape of a birthday cake candle, and contained a thermal blinking mechanism based on a bi-metal strip.  The bulbs had coatings of various colors, four or five different colors in all.  When strung on the tree, the bulbs cast a shadow on the ceiling of the branches above it.  At any given moment, a random collection of bulbs was lit up, and it would change several times per second as bulbs lit and turned off.  It was like a movie, with colored lights and sharp shadows.  My dad loved to lie on the floor and look up at that show on the ceiling, and I'd lay there with him for long stretches, just staring up at the Christmas tree show.  I've longed to have that again.  Those blinking lights became hard to obtain right about the time I could afford to buy them (in the late '80s, a set like my dad bought cost over $100).  The few incandescent light sets that are still available have all the lights in series (electrically), so the blinking light bulbs won't work.  The “twinkling” LED sets have all been ones where the entire string of lights blinks on and off simultaneously – not the same thing at all!  I'm excited about these twinkling LED lights I've just ordered – they might, at last, give me something like what we had in my childhood.

A couple of days ago, our friend and neighbor Tim D. called and asked if I could help him with a couple of computer issues.  The first one was that his Internet access had gone down, and after six or seven hours on the phone with Comcast he still didn't have it working.  I went over and started checking things out, and it quickly became obvious the problem was somewhere between his computer's Ethernet port and the WiFi modem's Ethernet port that it was plugged into.  The first thing I tried was wiggling the cables – and that did the trick.  One of his connectors had some dirt or corrosion on a pin, probably, and just a little wiggle was all it took to clear it up.  That took six minutes, including the travel time to his house. :)

The second problem was a big more challenging: he was trying to make his brother's laptop usable.  The fundamental problem was that it had Windows 8 on it, and neither he nor his brother had any idea how to use it.  Nor did I!  But I have, perhaps, and advantage over him with my computer experience, and I was able to figure out enough to get some basic things running.  When I went to update his apps, I discovered that Windows 8 was no longer supported by Microsoft, but Windows 8.1 was – time to upgrade Windows!  That took us about an hour of fiddling around before I discovered that Microsoft's antivirus program (Windows Defender) was preventing the upgrade from working.  I'm so used to the Mac now that my default was to expect the upgrade installer to handle that intrinsically.  Not only did it not handle it, it didn't even notify us about the problem – it just kept reporting that it couldn't install with no explanation of why.  Sheesh, Microsoft – get with the program, will ya?  When we finally did get Windows 8.1 installed, we found, to our delight, that it now looked much more like versions of Windows we both knew and hated.  But at least we now knew how to find things.  That made life ever so much easier – we then were able to easily configure his brother's computer in a way that gives him at least a fighting chance at being able to use it.

It was very satisfying to be able to help on that.  It goes part way toward repaying Tim for all the help he gave me a couple of years ago...
Posted by Unknown at (permalink) 8:29 AM No comments: