Putting Smiley Faces on the Zeroes... 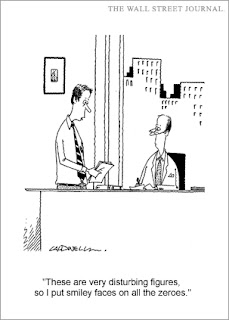 The cartoon at right appeared in this weekend's Wall Street Journal.

I think the cartoonist was imagining a business setting when he drew that.  But what came to my mind was our government bureaucracies – not the elected officials, but the hordes of appointed bureaucrats that run our vast government enterprises.  Putting smiley faces on the zeroes is exactly what they do every day as they find ways to put lipstick on the pigs – the many metrics that we use to measure what those bureaucrats are (allegedly) responsible for.

Consider the unemployment rate numbers, for example.  Over the years, the bureaucracy has repeatedly modified the number they feed to the news media to make it look artificially low.  To just about anyone not involved in the bureaucracy, it's rather obvious that a person is still unemployed even if they've completely given up on finding a job.  In fact, you might reasonably say that such a person is especially unemployed.  But our bureaucracy has defined them out of the unemployment rate, and their unemployment is not counted in the number they feed to the press.  That's but one of many, many examples of this stock-in-trade “trick” of the bureaucracy.

They're putting smiley faces on the zeros.

Remember that when you vote in November!
Posted by Unknown at (permalink) 6:26 AM No comments:

Yesterday, on his visit to South Korea, Obama said this (part of a larger comment):


North Korea will achieve nothing by threats or provocations. Bad behavior will not be rewarded. There had been a pattern, I think, for decades in which North Korea thought if they had acted provocatively, then somehow they would be bribed into ceasing and desisting acting provocatively. What I've said to them consistently is rewarding bad behavior, turning a blind eye to deliberate provocations, trying to paper over these not just provocative words but extraordinarily provocative acts that violate international norms, that that's not obviously working.

This sounds like the right thing to say to the North Koreans. The trouble is that Obama's predecessors, all the way back to the Eisenhower administration, have said essentially the same thing, but behaved otherwise. The rest of the world, but most especially the U.S. and South Korea, keep telling the North Koreans that we will not reward them for bad behavior – and then we go ahead and reward them.  What passes for an upper class in North Korea has grown to be dependent on the food and other aid from the West.  Worst of all, they've learned (because we've trained them well) that if they do something outrageous (like, say, shelling a South Korean community), we'll respond with ... more aid.

I have no argument with Obama's rhetoric here; it remains to be seen whether he (unlike Eisenhower, Kennedy, Johnson, Nixon, Ford, Carter, Reagan, H.W. Bush, Clinton, or G.W. Bush) will break the pattern I just described.  I hope he will...
Posted by Unknown at (permalink) 6:06 AM No comments:

A big, beautiful barred-spiral galaxy, about 70 million light-years away, as seen by the Hubble Telescope.  From APOD, of course... 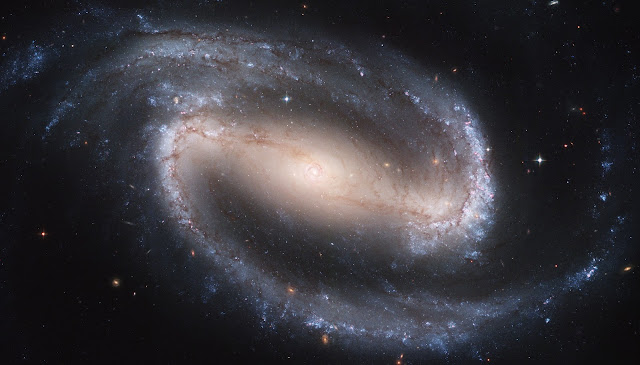