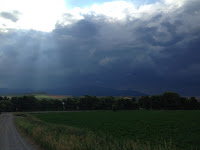 Evening in Paradise...  Took the dogs for their evening walk, but we didn't go very far as Mo'i wasn't feeling like it.  At one point he backed out of his choke collar, turned around, and started trotting for home.  We had to jog to catch up with him!  I guess he really just wanted his nice, soft doggie bed :) 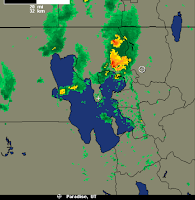 There's an impressive line of storms to our west, heading for us, as I write.  The photo at right was taken to the northwest, where it's very dark right now.  You can't see it, but our house is behind the trees at the left edge of the photo.  I think we're about to get rained on, and the radar (at left, click to embiggen) shows that.  Paradise is where that little circle with a plus sign is, and just to the left (west) of it you can see the yellows, oranges, and reds of an intense rain cell...
Posted by Unknown at (permalink) 5:44 PM No comments:

This guy set a new record...

This guy set a new record ... for being completely insane.  I don't know how you can top this one!
Posted by Unknown at (permalink) 4:43 PM 1 comment:

Progress in Paradise...  We actually had some progress today, on wiring up my new air compressor.  I ran most of the 240 volt circuit today, about 60' of the total of 85' that I have to run it.  I did the hard parts today, through two walls and into the main circuit breaker panel.  All that's left is the final 25' across a wall, and terminating in a junction box.  Should be a piece of cake to get that done tomorrow.  Then all I have left (for the air compressor) is a short run of 120 volt line for the air dryer that's built into the compressor. 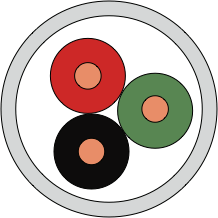 The 240 volt line I was running today is comprised of three 8 gauge copper wires, colored red, black, and green.  I'm running them inside a 1/2" PVC conduit, so in cross-section it looks something like the diagram at right (the scale is approximately correct).  As you can see from the diagram, the three wires fit inside the conduit with plenty of room to spare – and yet, running those wires through the conduit proved to be quite a challenge!

Why would this be challenging?  Well, imagine moving that red wire over to the other side of the green wire.  At one point in that process, all three wires would have to fit side-by-side inside the conduit – and the conduit just isn't big enough for that to happen.  In practice what this meant is that I had to “comb out” the three wires and tape around them every foot or so, to make sure they stayed in the same orientation.  Otherwise I could never have gotten them through the conduit!  Also, I had to do this one piece of conduit at a time, so that at most I had just a single bend to navigate.  This made the process quite tedious.  Of course, if I had been bright enough to buy 3/4" conduit...

These heavy wires are needed only because the start-up current for the air compressor is unusually high.  Under full load that motor (5HP) will draw about 21 amps – but during startup, according to the documentation, it will spike as high as 35 amps.  Yikes!  So I have to have a 40 amp breaker, and that means 8 gauge wire is the smallest safe size.  That's a whole lot of copper when you're talking about an 85' run, which is what I have...
Posted by Unknown at (permalink) 4:42 PM No comments:

Pictures from Paradise...  The first photo below is attempting to show the beautiful droplets hanging from green berries on a tree I haven't identified in my back yard.  The second is a local “corner garden”.  These are pretty common around here, in the corners of fields where the turning radius prevents the mowers, balers, and other equipment from getting into.  Rather than waste the space, people grow little gardens in them.  This on is drip irrigated, and is growing very quickly.  It's far enough from any waterway that it's not likely to have racoons stealing everything from it.  Skunks and magpies will be there, though.  The rest of the photos are from a barley field a half mile east of our house... 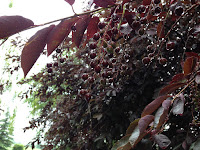 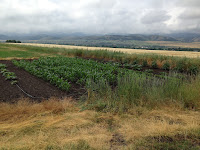 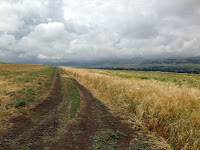 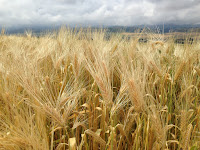 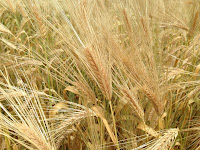 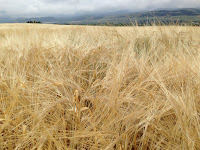 Posted by Unknown at (permalink) 12:42 PM No comments:

It's no longer spritzing...

Morning in Paradise...  For some reason I've slept particularly well the past couple of nights.  Generally speaking, a solid night's sleep is a rarity for me – something that happens maybe once a month.  In a good month.  To have two such nights sequentially is most unusual.  If this is a change brought about by ancientness, then I may embrace my ancientness more!

At 5 am, before dawn, the dogs and I took off on a morning walk.  Our heat wave appears to have broken last night – it was cool and humid this morning, and it even spritzed on us a bit.  The forecast is calling for a high of just 78° today, which (assuming that pans out) will feel downright chilly compared with the high 90s we've been experiencing.  The forecast for today also has a good chance of rain, with 4/10ths predicted.  That will be welcome here, especially for all the hay farmers around me.

We only saw one exciting thing on our walk.  Our first sighting was from about 150' away, an animal the size of a small dog scampering through alfalfa that had been mowed 10 days ago.  It was too dark to see it clearly, but it was headed right for us.  It was too big to be a skunk, so I just stopped.  The dogs went on full alert, staring intently at the moving shape.  It was downwind of us, so they had no odor cue, and didn't know what it was.  Finally it emerged from the field onto the road, just 6' or so in front of us – and then we could see that it was a gigantic house cat!  It was an orange tabby (I think – the light was very dim), and had the look of an intact male.  It's attitude was all cat: it glanced at us disdainfully, dismissively, and continued on its way at its own pace.  This despite the fact that all three dogs were slavering, barking, bouncing at the end of their leash trying to get at it.  The cat saw no threat at all, which really tweaked the dogs; they renewed their efforts to seem fearsome.  They failed.  Cat: 1, dogs: 0.  Human?  Laughing :)

As I write this post, it's just starting to get light outside my window.  The sky is deeply overcast, and it's sprinkling just a little.  I just got out my binoculars and looked at my rain gauge; it shows 3/100ths" last night.  That's about right if it spritzed most of the night, which I suspect it did, as everything is damp outside.

My mom and I have started playing a Scrabble-like game (called Lexulous) over the Internet.  So far I am clobbering her in an embarrassing fashion.  She claims its my good letters.  I did something to make her laugh (no idea what!), so it's a good morning :)
Posted by Unknown at (permalink) 6:27 AM No comments:

Oh, noz!  New Horizons is having problems.  I sure hope they get this resolved before the flyby, which is only 9 days away!
Posted by Unknown at (permalink) 6:07 AM No comments: Curiosity ... is looking at odd rocks on Mars...
Posted by Unknown at (permalink) 6:06 AM No comments: Zeta Ophiuchi...  Gorgeous false-color photograph taken by the Spitzer Space Telescope in infrared wavelengths.  Via APOD, of course.  Full resolution version here...
Posted by Unknown at (permalink) 6:04 AM No comments:

Intuition...  I ran across this blog post in my reading this morning.  It caught my attention mainly because it has a Feynman story in it; one that I was familiar with, but hadn't thought about in a while.  In it, Feynman talks about the importance of developing an “intuition” about physics problems, in addition to understanding the mathematics describing them.  Sometimes that intuition will get you to an answer long before you can prove it with the math.

I think that same observation applies across many kinds of science, and even some math itself.  I've noted the same phenomenon with arithmetic many times.  In particular, developing the skill to do arithmetic mentally or on slide rules (which actually involves quite a bit of mental arithmetic) helps you develop an intuition for the general value of a solution to an arithmetic problem.  Almost any problem in more advanced mathematics (say, a differentiation problem) involves, in the end, simple arithmetic, then having such an intuitive grasp on arithmetic helps you avoid errors in the more complex math.  I've used a variation of this to argue for the value of slide rules over calculators or spreadsheets.  As I read this blog post, it occurred to me that what I was really arguing for was developing an intuition for arithmetic, as Feynman argues for physics.

Several other fields I'm familiar with demonstrate the same value of an intuition.  Analog electronics, for example – having an intuitive understanding of how the basic components (resistors, capacitors, inductors, diodes, transistors) work is an incredibly powerful base to build an understanding of electronics on.  As Feynman might have said, you could analyze any circuit with mathematical tools, but it's far easier if you have a good intuition for how the parts work.  I think the same thing could be said for programming, or mechanical engineering, or concrete mix design...
Posted by Unknown at (permalink) 6:01 AM No comments:

A reader ... who requested anonymity! ... wants to know what I think of the #FreeTheNipple “movement”.  Being an unabashed lover of all things booby, I am – of course! – 100% supportive of anything that causes the Internet to produce things like this, this, or this.

Did you really need to ask?

I haven't asked my (Mormon) neighbors what they think of this movement, but somehow I doubt they are as supportive :)
Posted by Unknown at (permalink) 5:46 AM No comments: