Just heard that from the CDF fire crews.  Just before that, they said that they were down to just hot spots left; the fire was basically out.

Three cheers for the fire crews!  A bunch of people in Lawson Vally, Lyons Valley, and Deerhorn Valley are breathing a little easier...
Posted by Unknown at (permalink) 3:50 PM No comments: 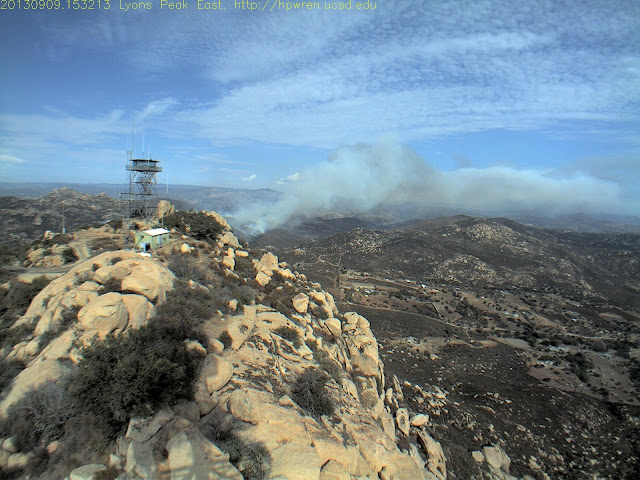 From all I can see and hear, it looks like the firefighters (both in the air and on the ground) are making great progress.  On the scanner I heard concerns from fire crews about the fire burning toward Carveacre Ranch, but the latest photo looks like they've largely knocked it down.  These things can flare up in a hurry, especially if the wind kicks up, so we're not out of the woods until they've doused every hotspot...

I just heard the fire crews order 500 lunches.  Hard to believe there are that many in the fire crew!
Posted by Unknown at (permalink) 3:37 PM No comments: 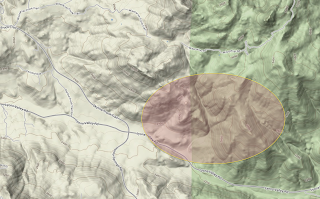 At right is a map with a pink shaded area showing roughly where the fire is located.  We believe (though we don't have eyes on it) that it's mainly north of Lyons Valley Road, just easy of Four Corners.

The fire is being actively worked as I write this (2:35 pm).  Debbie and I saw an observation plane orbiting, three tankers attacking the fire directly.  We also heard ground fire crews talking on the scanner.

The wind is light, out of the north.  The fire appears to be burning both to the south (presumably driven by wind) and to the north (which is uphill from the fire's perspective).  We're guessing that the fire crews will be able to contain it at the ridge west of Lawson Peak, if not before.  We certainly hope so, as our home is only a mile or so from that ridge.

Below are a couple of shots from the east-pointing HPWREN camera on Lyons Peak.  As always, this is our best information, as it's nearly real time (the photos are updated every 2 minutes, 24 x 7).

The top shot was taken at 1:44 pm today, the bottom at 2:28 pm.  As you can see, the fire teams have already made a lot of progress.  Go, firefighters! 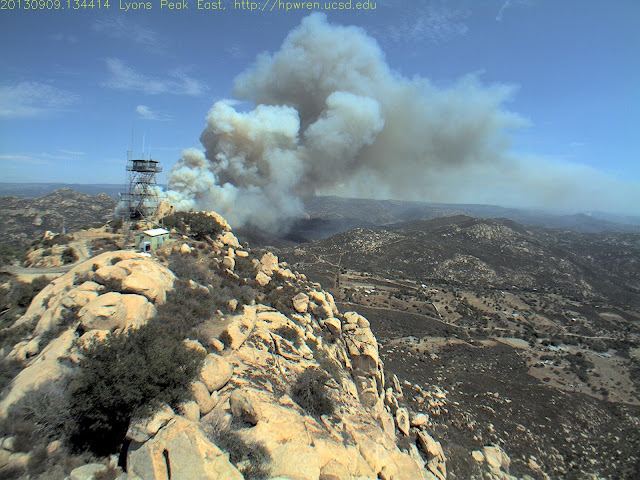 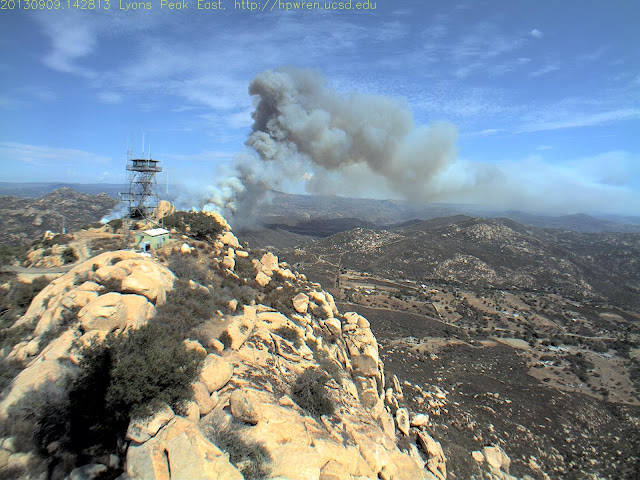 Posted by Unknown at (permalink) 2:43 PM No comments:

In just three little cartoon frames.  Scott Adams nailed it:  Dilbert on the NSA revelations and reaction to it...

Wait – they needed someone to tell them?  Little Rock, Arkansas has a new teacher dress code: they must wear underwear.  Teacher's union objects strenuously...

Well, she should know...  A Russian immigrant to the U.S. worries that we're becoming what she fled from over 30 years ago.  She has a handy checklist of the characteristics of socialist countries:
Gulp.

This is what the Internet is for, right?  Team drumming, the DrumCat way...

How's that climate change working out for ya, eh?  Arctic ice cover this year is 60% greater than last year.  Right on cue, the warmists are bleating that this is not evidence against global warming – even though they hooted and hollered last year about the decrease being solid evidence to the contrary.  Hypocrites and shoddy scientists, they are..

Knave or fool?  Is Obama's foreign policy the product of his incompetence, or his belief that America is a force for evil in the world?  Norman Podhoretz, no dummy he, argues knavery in a very scary piece...

Who knew?  In 1892 they knew how to cure just about everything!  Cheap, too!  Professor Wilson's Magneto-Conservative garments...

So this is what a super-power sounds like! John Kerry, on the planned American attacks on Syria: they will be “Unbelievably small.”  Ooooh, I bet Assad is really scared now!

Oh, please, no.  Just no.  Please!  Elections have consequences, and the 2012 elections might have some particularly bad ones...

Interchangeable, they are.  Dave Carter, writing at Ricochet:  “What we are witnessing is a disturbing and seemingly unstoppable coalescence of both major parties into an amalgamation of  autocrats, ambitious to maintain their own power and anxious to relieve us of our property and liberty.”  Makes me want to stock up on guns and ammunition...
Posted by Unknown at (permalink) 7:15 AM No comments: