Paradise ponders: wildflowers, healthcare market perturbations, and running-around-like-crazy edition...  I was so busy running around buying electrical parts yesterday (three separate trips to Logan!) and installing them that I never even went up to my office, let along posting on my blog.  That felt odd.  Because of all the running around, I didn't get much actual work done wiring up the shed.  I did manage to get one outlet box installed, though, and now the irrigation controller is powered up.  It connected to WiFi just fine, though not to the deck access point like I expected.  The first time it connected, it attached to the access point in my office – the furthest away from it!  The next time, it attached to the access point in Debbie's office, on the other side of the fuel tanks from the irrigation controller.  Weird!  I'm guessing that our wire fence is reflecting the signal somehow.

If you're one of the three crazy people who have been reading this blog for a long time, you know that I have pernicious anemia, and that I inject myself with cyanocobalamin (synthetic vitamin B12) as treatment.  In my case, the dose is 1 ml (milliliter), intramuscular, every two weeks.  If you do the math, that means I use 26 ml of the stuff every year.  When I was first diagnosed, 27 years ago, the standard form the drug was dispensed in was a 30 ml vial.  Back then, that vial cost about $15, and my insurance paid for all but the $2 co-pay.  The same exact drug was sold for veterinary use at about one third the cost per ml, though usually in (much) larger vials.  Bottom line: it was a ludicrously cheap treatment for a condition that would otherwise be fatal.

It's interesting to see how Obamacare has perturbed the price of this (formerly) cheap drug.  Obamacare forced insurance companies to cover only short-term prescriptions for drugs.  Somehow this was supposed to save money, though I have never understood the rationale.  For most drugs that meant a limit of 30 days worth, but for some (though not cobalamin) it is 60 days.  Now consider my pernicious anemia – for 30 days I need two 1 ml doses, or a total of 2 ml.  The drug companies could no longer sell cobalamin in 30 ml vials if they wanted insurance companies to pay for it.  So the drug companies, quite reasonably, responded by packaging cobalamin in a way they had never previously done so: in 1 ml vials.  If you're not familiar with ml, that's a teensy tiny amount of the drug – about the same as the ink in a standard ballpoint pen.  The container is, quite literally, several times as costly as the drug that it contains.  If I were to purchase cobalamin in this way, I'd pay a$10 co-pay for each of the 26 doses I needed per year.  That works out to a $260 out-of-pocket annual expense for me – 130 times what I paid when I was first diagnosed.  I'm not sure I want to know what the insurance company pays as their portion.

That just seemed ludicrously wasteful to me, and way more expensive than it really ought to be.  I seriously considered just buying veterinary cyanocobalamin, like this one: $10 for 250 ml.  No prescription needed, and theoretically the same exact drug.  I talked it over with our local pharmacist, a very friendly fellow, and he suggested that I special order a 30 ml vial through him instead.  That would cost me $145 out of pocket, just over half what the insurance co-pay would cost, and it's human-grade stuff (though I suspect it's really all coming out of the same cyanocobalamin faucet somewhere).  So I did – I paid about $5/ml for the same drug that costs $0.04/ml if you're buying it for your horse.  Sheesh.  Nice job at reducing costs, there, Obamacare!

On Monday afternoon, Debbie and I took a drive out to Hardware Ranch.  We didn't see much of the usual wildlife, but we did get a treat: two bird families are nesting inside the wall of the Hardware Ranch visitor center.  One family are flickers, getting to their nest through the frame of an east-facing window.  The other is a small hawk (unidentified), entering through a hole below a large light on the east wall of the visitor center.  The two entrances are less than 20' apart.

And then there were the wildflowers!  We spotted the blue ones first; they are so bright you can see them from 100' or more away.  When I walked out in a couple of hillside meadows, I saw many more.  This was truly a delight for me.  Some photos below.  There's a very pale violet lupine in that mix, but most of them are flowers I don't know.  I also stumbled across a sage with a gnarled trunk that looks like it's 1,000 years old.  The leaves on this species are particularly pungent when crushed. 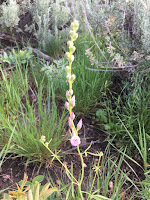 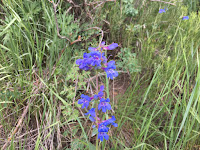 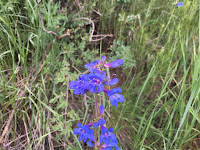 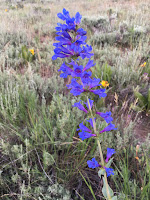 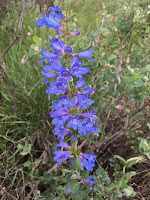 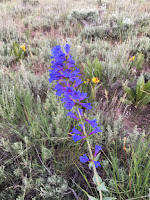 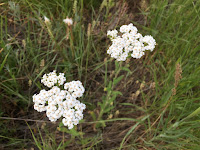 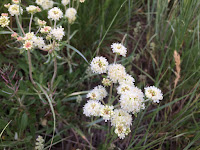 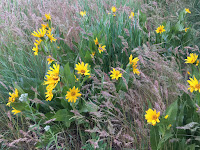 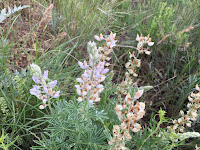 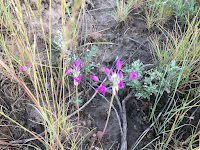 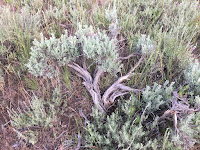 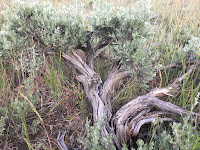 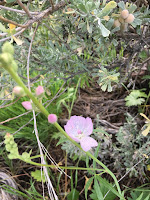 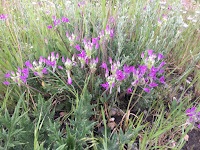