Tired, I am...  The brush pile remaining turned out to be about three times the size I had estimated.  It took me all day simply to cut it up into (roughly) 6' long pieces and pile it up.  The resulting pile is 33' long, 6' wide, and about 4' high on average, after compacting by jumping up and down on it.  I've stacked it with branches all running in one directly so that I can pick it up easily with my tractor's fork (it's designed for pallets, but works great for brush stacked parallel).  I used two tanks of fuel on my chainsaw to do all the cutting.  I didn't actually burn any today; that will be tomorrow's job if the weather holds.

When I'm working with the chainsaw, I am careful to work only when I'm not dog tired.  I always wear my safety gear (helmet, hearing protectors, face screen, Kevlar leggings, Kevlar gloves, and steel-toed heavy leather boots).  The locals all look at me a little funny in this get-up.  I strongly suspect that none of them have ever even seen this safety gear, much less used it.  Manly men wouldn't stoop to such aids :)  I couldn't care less about the appearance, but I care a lot about keeping as many parts of my body intact as possible.  I've seen the videos showing the Kevlar leggings and gloves at work; I find those videos quite persuasive.  The boots seem commonsensical, as there are times when the end of the chainsaw blade is down near my feet.  The helmet with its integral hearing protector and face screen is actually very convenient, as is the absence of saw-ejected sawdust and wood chunks in my eyes.  Besides, the get-up is only confirming what the neighbors have already figured out: I'm not normal (at least, not by their standards!).

Anyway, I took a half-dozen or so breaks during the day, before another bout of chainsaw work.  During these breaks, I perched myself over the irrigation canal bank, under the shade of a big old black willow tree.  The burbling of the slow-moving canal was pleasant, as was the sight of the water.  The birds, though, were a great entertainment.  The trees along the canals are hosts for quite a few nests, all of which are occupied by hungry babies at the moment.  I watched as four pairs of robins, two pairs of red-winged blackbirds, an uncountable number of house finches, two pairs of warblers (unidentified), one pair of Bullock's orioles, and a pair of something that looked a grosbeak all worked hard to feed their babies.  Under our bridge, a hundred feet or so away, were the nests of about 20 pairs of barn swallows, also busily feeding their babies.  A pair of mallards swam along the canal, no babies behind them yet – probably soon, though.  All of these birds – most especially the robins and the blackbirds – were hollering away at me.  They were most seriously displeased, to steal a favorite phrase from Jane Austen.  I was pleasantly entertained.

As I worked away, several people honked in greeting.  I don't know who they were; I couldn't see them and I didn't recognize the cars.  Two cars actually stopped to see if I needed help.  One of those people was someone I'd never met before; the other a person I'd met once in the Paradise Post Office.  Both offered to run home, throw on some sacrificial clothes, and then come back to wallow in the mud with me piling brush.  I told them I was fine on my own, and to keep their Sunday something fun – but the offers sure put a smile on my face.

After I finished piling all that brush, I took our three dogs out for a half-mile walk up the dirt road that runs east from our house.  It was a lovely late afternoon, with puffy clouds covering perhaps half the sky, leaving lots of sunlight all around us.  The hills to our west were a beautiful dark green in various shades, different crops being slightly different colors.  There was a slight haze in the air that layered a dreamy sort of look over the whole scene.  We could hear horses snuffling, cows mooing, sheep baaing, and dogs barking.  Barn swallows swooped all around us, no doubt catching food for their babies.  As we walked by our neighbor's pasture, the four horses within came trotting over to see us – we're all becoming friends now.  Even the dogs stick their noses through to greet them.  A half mile or so away, I could hear one of my neighbors to the south mowing her small lawn behind her house.  A little north of our place, I saw another neighbor stringing out hand line (irrigation pipes that you carry by hand, in 30' long pieces), preparing to irrigate.  That seems a little premature to me, but maybe he just wanted to be outside on such a gorgeous evening.

I love living here...
Posted by Unknown at (permalink) 5:15 PM No comments:

Mark Steyn at his best...

Mark Steyn at his best... and that's pretty damned good!  Movies and politics mix well in his hands.  A small sample that had me spitting out my morning tea:


The nearest they got to solving the problem was in Primary Colors (1998). The Bill Clinton character was played by John Travolta at his most ingratiating, whereas Hillary was such an unsympathetic character that, as with Hannibal Lecter or the Die Hard terrorist masterminds, they had to fly in a Brit to play her. The role went to Emma Thompson, presumably because Alan Rickman and Jeremy Irons turned it down. (If memory serves, Rickman drew the line at the prosthetically enhanced ankles, although he'd totally nailed the robotic voice that tells you to fasten your seat belt.)

Go read the whole thing!
Posted by Unknown at (permalink) 7:22 AM No comments:

For all you selfie-stickers out there...

For all you selfie-stickers out there...  You know who you are!
Posted by Unknown at (permalink) 7:17 AM No comments: 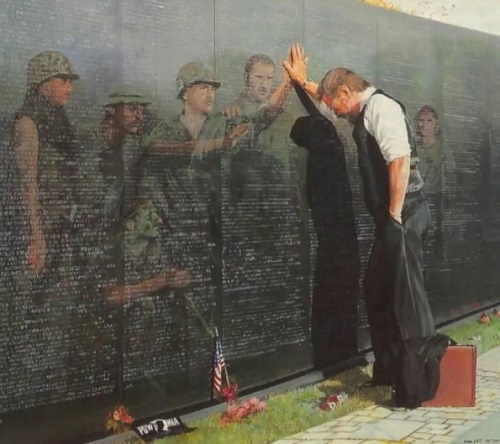 Seven people I've known ... are on this wall, including one I called “friend” and another “mate”, both from my service in the U.S. Navy.  Actually, it's possible there are more that I'm unaware of.  My friend was a hospital corpsman I met in boot camp, killed in 1972 while treating a U.S. Marine injured in combat (the Marine survived).  My mate was a fellow DS (data systems technician) who served on PT boats, then became a DS, and then volunteered for another “tour” on PT boats.  He was killed in a firefight along a river just 25 miles northeast of Saigon in the last days of American involvement in the war.

I think of them both every year around this time, along with the thousands of others who were casualties in America's many wars...
Posted by Unknown at (permalink) 7:13 AM No comments:

Perambulation in Paradise...  Some scenes as the dogs and I took our early  walk in Paradise, on a quiet Sunday morning:

Posted by Unknown at (permalink) 6:38 AM No comments:

1993 Camry recalled by Toyota...  Because you really should have bought something new by now :)  It's the Onion, folks.  But it made me (a serial Toyota owner) laugh out loud.  The average mileage on our vehicles is well over 150,000 miles – and we still think of them as new!
Posted by Unknown at (permalink) 5:34 AM No comments: Babi and Aton...  Closeup imagery of Comet 67P, taken by the Rosetta robotic explorer.  More information here...
Posted by Unknown at (permalink) 5:30 AM No comments:

Progress in Paradise...  Looks like we have a cloudy, but dry, morning.  I'll be heading out soon to (I hope!) clean up the last of the brush left behind by the Mormon horde one week ago.  I'll likely be very tired when I get back in, so blogging will be iffy today.

Debbie and I watched more television yesterday than I have in quite a few years now.  We've been intermittently watching a British series called Foyle's War, set in England from WWII through the early Cold War years.  Stuck inside on a rainy day, yesterday we watched the last three episodes of the entire series.  We've quite enjoyed these.  The acting is excellent, the story lines intriguing (especially for anyone who loves British mysteries), and the production quality is very high.  While they took a few liberties with actual history, for the most part the events depicted are completely consistent with reality.  Most of you know that I watch nearly zero television.  For me to watch an entire series, it has to be particularly well done, and on a subject that appeals to me.  Foyle's War hit the mark especially well.  Highly recommended!

We have a bit of Mo'i news, or perhaps more accurately, preliminary Mo'i news.  He's our 16 year old field spaniel, who just a few months ago was struggling and (we thought) near the end of his rope.  In January he developed a strange condition that had no organic cause that our veterinarian could detect: he started compulsively drinking, and as a result, urinating uncontrollably.  We started putting diapers on him, and that cured the problem of urination in the house – but of course that was merely treating the symptoms.

A few weeks ago, we noticed that his compulsive drinking seemed to be tapering off.  Shortly thereafter, wet diapers started tapering off as well.  Finally, two days ago, he hit a milestone that I was watching for: 3 weeks without a wet diaper.  So yesterday, for the first time in five months, we let him go all day without one.  No “accidents”.  With a little trepidation (as waking up to a urine-soaked kitchen is not high on our list of preferred awakening modalities), we left the diaper off last night.  This morning he woke me up later than usual (at 4:30 am) with his “I have to pee!” bark, and I took him out for his morning walkie.  The kitchen was unsullied.

So for reasons we have no way to discern, Mo'i's odd thirst and urination issue looks like it might be over – just a strange five month episode in his life.  Meanwhile, he is in much better physical condition now than he was in January, thanks to walks we've been taking with him.  We'll do a mile or so this morning, something he simply could not have done in January.  One theory we have about the odd behavior is that it was some kind of response to the stress of moving to Utah.  If so, it was a stress our other dogs felt none of – they (very obviously) couldn't be happier to be in this land of cool, green grass.  It's harder to tell with Mo'i – at his age, his cavorting days are over.  The stress theory is just a theory, though; really it's just a correlation between his behavior and the timing of the move.  But we have no other theories.

In any case, to have our relatively normal Mo'i back with us is a joy that we're cherishing while we have it.  At this moment he's in much better condition than when we left California, is clearly enjoying his life up here, and has no bizzaro behaviors.  We'll take that!
Posted by Unknown at (permalink) 5:27 AM No comments: