Well, you just never know ... what life is going to hand you.  All the more reason to take advantage of every moment you have with the people you love.

On Friday, Debbie entered her first agility competition in over three years.  She took about 10 steps after getting Miki started, and then her other knee (the left one that's never before been injured) broke, badly, and down she went.  Her left knee is broken in four places at the top of the femur, with several more small pieces.  She landed on her right, previously injured knee and broke the patella (with no bone displacement), a relatively minor injury (though painful).

She's going to need surgery, and that's tentatively scheduled for Tuesday.  If the swelling in her knee doesn't go down, the surgery will have to be postponed until it does.  Once the surgery is complete, she's facing 12 weeks (minimum) of no weight bearing on that leg.  She's been through that twice before, so she knows exactly what lies ahead.  That's not a pleasant thing to know, so it's challenging for her to keep her spirits up.  At the moment she's stuffed full of pain meds, a little loopy, fading in and out – but she's on her phone and email.  If you know her, it would cheer her up to hear from you...

I just returned from a visit to Debbie, and there's a bit of news.  First of all, her surgeon (Dr. Rowley) is positive that she has a bad bone density (and therefore strength) problem.  He says she has the bones of someone 20 years old than she actually is.  Given the condition of her bones, he was unsurprised that she sustained this injury.  Debbie's been tested for bone density twice in the past 10 years, and passed both with flying colors.  As soon as she's done with this surgery, we're going to poke into this issue with some vigor.  On the other hand, the swelling in her left leg was greatly reduced, and Dr. Rowley is sure she's going to be ready for surgery on Tuesday.  That's good news, indeed.  Debbie looked a lot better to me than she did last night, and her spirits seemed better until she had an attack of muscle spasms (very painful) in her left knee not long before I left.

Meanwhile, back at the farm, I'm taking care of five kittens (all doing great!), their mom, and (as of yesterday) two adorable little field spaniel puppies.  Some photos of this bunch are below: 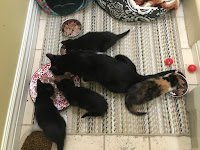 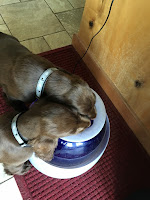 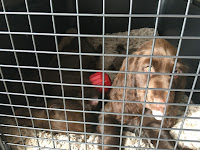 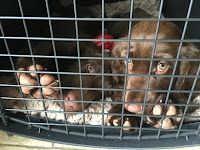